New Worldwide Coral Reef Library Created
A collection of 1,490 coral reef images has become the basis for a new Internet- based library for the Millennium Coral Reef Project. It was created in a partnership with NASA, international agencies, universities and other organizations to provide natural resource managers a comprehensive world data resource on coral reefs and adjacent land areas.

The integrated Remote Sensing of Coral Reefs and Millennium Coral Reef Mapping projects have many partners including NASA, the National Oceanic and Atmospheric Administration, and the University of South Florida (USF), which are providing funding, data or manpower. 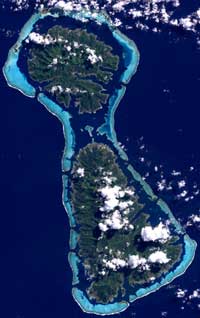 Image to right: Coral Reefs Around Islands -- The islands of Raiatea (lower) and Tahaa (upper) lie in the Society Islands of the South Pacific between Tahiti and Bora-Bora. A barrier reef protects both islands and their shared lagoon from the large swells of the open ocean.  These swells break and expend their energy along the fore reef and reef crest, and the resulting bubbles show up as a white outline in this Landsat-7 image. The white carbonate sediments of the back reef zone appear as a turquoise band because the overlying shallow water absorbs more red than blue of the incoming sunlight before it is reflected back to space. Click on image to enlarge. Credit: NASA/USGS

The current knowledge about the total area and locations of coral reefs worldwide is not adequate to see changes that occur in them. "Remote sensing of coral reefs has been a rapidly developing research area," said Julie A. Robinson, the scientist who managed the project for the Earth Observations Laboratory at the NASA Johnson Space Center (JSC), Houston, Texas.

NASA has contributed funding and satellite data to the project, whose purpose is to develop global reef maps as a base for future research. The project will also serve as a library for the coral reef remote sensing data.

From 1999 to 2003, the Landsat 7 satellite took the 1,490 images of coral reefs to complete the required global coverage. Landsat is managed by the U.S. Geological Survey (USGS).

The images and data were assembled by the Institute for Marine Remote Sensing (IMaRS) at USF, St. Petersburg, Fla. "There has been amazing cooperation at all levels to assemble this data together," said Frank Muller-Karger, of USF. The Landsat 7 Science Team specifically scheduled observations of many reef areas for the first time.

The final map products are due for release in early 2005. Currently, the raw archive is available on the Internet at http://seawifs.gsfc.nasa.gov/cgi/landsat.pl. The archive and online data interface were developed by the SeaWiFS Project at NASA's Goddard Space Flight Center (NASA/GSFC) in Greenbelt, Md.

"The archive is our first completed product and will immediately provide data to improve local assessments of reef resources around the world," Robinson said. "This data archive provides access to a reliable global satellite dataset for mapping coral reefs. It will serve as a source of data for projects around the world," said Serge Andréfouët, who led data collection and mapping at USF and is now with the French Institut de Recherche pour le Développement (IRD) in New Caledonia.

USF in collaboration with JSC is characterizing, mapping and estimating extent of shallow coral reef ecosystems in the Caribbean-Atlantic, Pacific, Indo-Pacific and Red Sea using the Landsat images. The archive highlights similarities and differences between reef structures at a scale never before considered by traditional field studies. 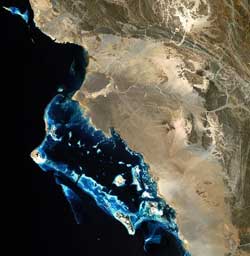 Image to right: Coral Reefs in the Red Sea -- The Red Sea coast of Saudi Arabia northwest of Medina is a very arid place in which little grows.  By contrast, coral reefs just offshore support diverse life forms. In this Landsat-7 image of the region, reefs appear as brownish ribbons set amid aquamarine carbonate banks. Click on image to enlarge. Credit: NASA/USGS

"Current estimates of the extent, health and even the location of the world's coral reefs are completely inadequate to answer the key question about the how reefs and the fragile ecosystems that they support are adapting to a changing environment. This newly released data set will help provide the baseline against which future observations can be compared," said Gene Carl Feldman, SeaWiFS Project manager, NASA/GSFC.

For an overview of NASA's collaborations, projects and products on global remote sensing of coral reefs, visit: http://eol.jsc.nasa.gov/Reefs/

For more information on the SeaWiFS Project at GSFC, visit: http://seawifs.gsfc.nasa.gov/