NASA Coral Reef Images Key to New Global Survey
A first-of-its-kind survey of how well the world's coral reefs are being protected was made possible by a unique collection of NASA views from space. 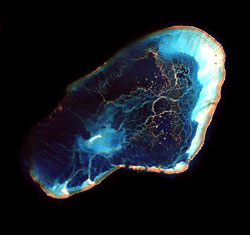 A team of international researchers compiled an updated inventory of all "marine protected areas" containing coral reefs and compared it with the most detailed and comprehensive satellite inventory of coral reefs. The global satellite mapping effort is called the Millennium Coral Reef Mapping Project and was funded by NASA.

The assessment found that less than two percent of coral reefs are within areas designated to limit human activities that can harm the reefs and the sea life living in and around them. Countries around the world have created these protected ocean and coastal zones where human activities such as shipping, fishing, recreation and scientific research are restricted to varying degrees.

"The contribution of NASA images to this project was crucial," says study lead author Camilo Mora, a marine biologist at Dalhousie University, Canada. "The satellite images allowed us to pinpoint where coral reefs are actually located within coastal marine ecosystems." 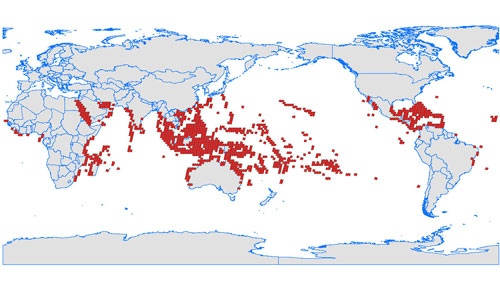 Image above: To create a global view of coral reefs, over 1700 images (red boxes) from the Landsat 7 spacecraft were collected for the Millennium Coral Reef Mapping Project. Natural resource managers around the world now use these images to study and protect the delicate ecosystems. + Click on image to enlarge. Credit: University of South Florida Institute for Marine Remote Sensing

The Millennium Project collection of global images of coral reefs from the Landsat 7 spacecraft are publicly available from NASA's Goddard Space Flight Center, Greenbelt, Md. Landsat 7 was designed by NASA and launched in 1999. The Landsat Program is a series of Earth-observing satellite missions jointly managed by NASA and the Department of the Interior's U.S. Geological Survey. 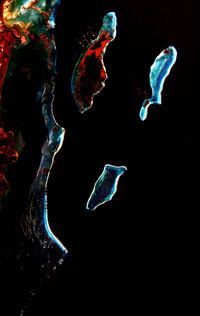 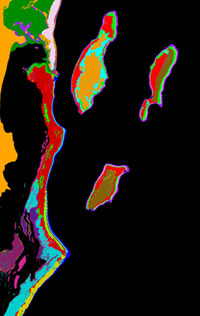 (Image left): These barrier reef and atolls off the coast of Belize in the Caribbean Sea are partially protected by small "marine protected areas." NASA is funding research on these and other reef systems around the world to improve environmental assessments. + High resolution image Credit: NASA (Image right): The Millennium Coral Reef Mapping Project used images from Landsat 7 to create detailed color-coded maps showing many different types of surface features, terrain, and underwater features such as lagoons. This map of the Belize reefs shown at left covers an area 63 miles across and 100 miles long. + High resolution image Credit: Millenium Coral Reef Mapping Project

The new study found that while the number of marine protected areas has been increasing, the level of effective worldwide protection of coral reefs is small. The study also found that most protected zones are too small to provide protection for fish species that routinely swim outside the boundaries. Only a handful are big enough to protect fish and marine life that naturally range outside their boundaries. The study was published in the June 23 issue of the journal Science.