Golden State Heating Up, New NASA/University Study Finds
Average temperatures in California rose almost one degree Celsius (nearly two degrees Fahrenheit) during the second half of the 20th century, with urban areas blazing the way to warmer conditions, according to a new study by scientists at NASA and California State University, Los Angeles.

Bill Patzert of NASA's Jet Propulsion Laboratory, Pasadena, Calif., teamed with Steve LaDochy of California State University, Los Angeles, and Richard Medina, now a doctoral candidate at the University of Utah, Salt Lake City, to investigate California air temperature patterns from 1950 to 2000. They analyzed data from more than 330 state weather stations, looking for patterns of climate warming and cooling in each of the state's seven major climatic subregions. Their objective was to shed new insights into the relative roles humans and natural climate events play in affecting California regional temperatures. 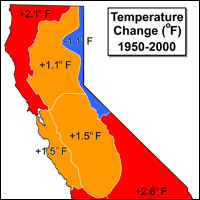 The scientists found great variations in temperature patterns throughout the state. Average temperatures increased significantly in nearly 54 percent of the stations studied, with human-produced changes in land use seen as the most likely cause. The largest temperature increases were seen in the state's urban areas, led by Southern California and the San Francisco Bay area, particularly for minimum temperatures. Minimum temperatures at some agricultural sites showed increases comparable to some urban areas. Rural, non-agricultural regions warmed the least. The Central Valley warmed slowest, while coastal areas warmed faster, and the southeast desert warmed fastest.

Patzert said the increased rate of minimum temperatures has led to narrower daily temperature ranges throughout the state. "California nights are heating up, giving us a jump start on hotter days," said Patzert. "This is primarily due to increased urbanization, not increases in cloudiness or precipitation. Rainfall and snowfall didn't increase significantly for most California stations during the study period." 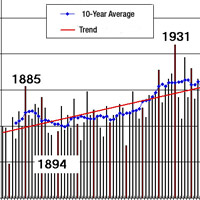 "California's complex topography and large latitude range give it some of the most diverse microclimates in North America," said LaDochy. "Climate change models and assessments often assume global warming's influence here would be uniform. That is not the case. If we assume global warming affects all regions of the state, then the small increases our study found in rural stations can be an estimate of this general warming over land. Larger increases would therefore be due to local or regional changes in land surface use due to human activities."

The researchers cited numerous factors contributing to California's temperature trends, including urbanization, population, Pacific Ocean conditions and elevation. They found a strong correlation between air temperatures and Pacific coastal sea surface temperatures. The Pacific temperatures warmed 0.09 degrees Celsius (0.16 degrees Fahrenheit) per decade during the study, about half the amount the state warmed overall during that time.

Patzert said air temperatures were significantly influenced by fluctuations in the Pacific Decadal Oscillation, a basin-wide oceanic pattern similar to El Nino and La Nina but much larger, lasting many decades rather than just a few months. "During the positive, warm phase of the oscillation, from about 1977 to 1997, average air temperatures were higher," he said. "During the negative, cold phase, from 1950 to 1976, they were lower." Patzert and other scientists track Pacific Ocean patterns using NASA's Jason satellite altimeter.

Results of the study appeared in the journal Climate Research.