Dr. Phil DeCola is Program Scientist for the Aura Mission and for the Atmospheric Composition Focus Area in the NASA Science Mission Directorate, Earth-Sun System Division. His scientific training and research is in the areas of molecular spectroscopy and condensed phase energy transfer and he has authored a number of publications in the area of nonlinear spectroscopy and its application to solid state energy transfer. His association with NASA began with research on radiative transfer properties of planetary atmospheres and is now focused on remote sensing of Earth's atmospheric composition.

Dr. DeCola serves as the co-Chair of the U.S. Government's Climate Change Science Program Sub-group on Atmospheric Composition. He has served as Program Scientist for the Earth System Science Pathfinder Program (ESSP), a science-driven program intended to identify and develop low-cost, quick turnaround space-borne missions addressing high priority Earth System science objectives. He is also Program Scientist for a number of other atmospheric composition focused space missions, including the Orbiting Carbon Observatory (OCO), a mission designed to precisely measure global distributions of carbon dioxide in order to greatly reduce uncertainty in the global carbon cycle. (OCO is scheduled to be launched in 2007 and to join Aura in the A-Train formation.)

Dr. DeCola has received the Terra Award in Earth Science, the NASA Exceptional Performance Award and a number of other awards for his leadership of Atmospheric Composition research within NASA. He received both his Bachelor of Arts in Chemistry and his Ph.D. in Chemical Physics from the University of Pennsylvania in 1984 and 1990, respectively, and was awarded a National Academy of Sciences postdoctoral fellowship in 1991. He greatly enjoys his involvement in science education and outreach at the Pre-K through Graduate School levels, especially at the schools of his two children Frankie (6) and Nina (3).

Dr. Mark Schoeberl is an atmospheric scientist who specializes in stratospheric processes including wave dynamics, ozone depletion and trace gas transport. He has over 160 refereed publications and over 4300 citations in atmospheric science journals. Since the early 1980’s he has worked at NASA Goddard Space Flight Center, and is currently the Chief Scientist for the Earth Sciences Division as well as the Aura Project Scientist.

Dr. Schoeberl is a Fellow of the American Geophysical Union (1996), the American Association for the Advancement of Science (1996), and the American Meteorological Society (1996). He was awarded Goddard’s William Nordberg Memorial Award for Earth Sciences (1998), NASA's Exceptional Scientific Achievement Medal (1991), NASA’s Outstanding Leadership Medal (1996) and Distinguished Service Award (2000), the latter being NASA’s highest award of this type. He shared the William T. Pecora award for his work with UARS. He is the AMS Sigma Xi Lecturer for 2005. Dr. Schoeberl grew up in Iowa, and received his Ph.D. in Physics at the University of Illinois in 1976.

Click on thumbnails below for high resolution images.
(If you have trouble opening file after download, you may need to add ".tif" after the filename) 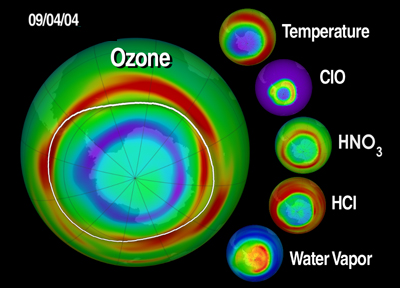