NASA's Aura: New Eye for Clean Air
Essential Air
Take a deep breath. On Earth the air is easy to take for granted. It's everywhere. But if you take a rocket into space the Earth's atmosphere falls away. Astronauts understand this at an instinctive level. Unlike just about every other career in the world, astronauts must bring their own atmosphere to work. It is this essential nature about the atmosphere that generated such high expectations for NASA's Aura satellite. Launched in July of 2004, this powerful research platform is already providing the first-ever daily, direct global measurements of low altitude or tropospheric ozone and many other pollutants that affect our air quality. Moreover, Aura delivers its results with unprecedented clarity over a region. The instruments onboard will help scientists monitor pollution production and transport around the world. 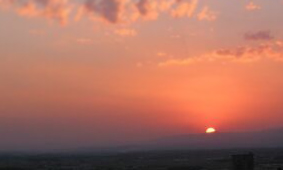 Measurements taken from the satellite also offer the potential for new insights into how climate changes influence the recovery of the stratospheric or upper ozone layer, the protective region that shields the Earth from ultra-violet radiation. "Data from NASA missions like Aura are a valuable national asset," said Phil DeCola, Aura Program Scientist, NASA Headquarters, Washington DC. " For example, clean air is a vital need, and air quality is not merely a local issue.


The Body of the Air, Starting at the Ground
We live in the troposphere; a region of air that begins at the ground and rises approximately 17 kilometers (11 miles). But the atmosphere rises far above the troposphere, split into multiple layers. Aura will help researchers make determinations about the chemical interactions happening in different layers of the sky to better understand both human induced and natural processes that continue to shape our world. But the actual amount of specific pollutants, and how they behave in the atmosphere makes pollution transport a challenge. Simply put, it's hard to quantify how much industrial sources and internal combustion engines contribute to poor low level air quality at local or regional scales. 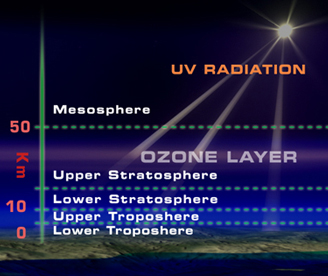 Image to right: Labels of the atmospheric levels.

Peering into the High Stratosphere
Aura looks at the stratosphere in new ways, too. Where ozone in the upper atmospheric layer is vital to life on Earth, ozone in the lower atmosphere can be hazardous to the health of humans, plants and animals. Commercial airplanes fly just below the stratosphere. Among other attributes, the stratosphere contains a protective layer of ozone that protects us from harmful solar radiation. Aura's MLS instrument (Microwave Limb Sounder) has just started collecting daily data about the physical and chemical processes that influence the health of the protective ozone by measuring other chemicals in the atmosphere that affect ozone chemistry worldwide. MLS data provide the most complete chemical measurements available to understand the ozone layer and its predicted recovery. This instrument also measures the upper tropospheric water vapor abundance, a key component in the radiation budget. Water vapor is a key climate change and determining how much energy the Earth absorbs or reflects from the sun.

Ozone: The "Hole" Story
The ozone hole is really a region of atmosphere where ozone levels have been dramatically depleted by destructive interactions with other chemicals. This depleted zone forms each spring in the Southern Hemisphere, centered roughly over the south pole. The British Antarctic Survey discovered it in 1985, and since then it has become a major area of atmospheric research. Subsequent missions established that the ozone hole was caused by the introduction of human produced chlorofluorocarbons emitted into the atmosphere. The first measurements that established cause of the Antarctic ozone hole was from an instrumented NASA airplane. The size of the ozone hole grew steadily in the 1990s. NASA satellites monitor the growth size and evolution of the ozone hole. NASA's UARS satellite further developed the chemistry.

Recent initiatives by governments around the world have curtailed the production of additional chlorofluorocarbons. But damaging chemicals still persist in the upper atmosphere, and scientists expect the "hole" to persist for at least forty years Aura's instrument called OMI (Ozone Monitoring Instrument) makes global measurements of stratospheric ozone with four times better spatial resolution than its predecessor, NASA's EP-TOMS (Earth Probe Total Ozone Mapping Spectrometer). The TOMS series flew on seven different satellites over the last 25 years. OMI continues the TOMS legacy. But it also extends the NASA's reach. OMI is a sensitive instrument capable of detecting a host of chemicals, other trace gases, such as nitrogen dioxide and chlorine monoxide, that impact air quality. Like TOMS, OMI will allow experts to derive the total amount of ultraviolet radiation reaching the Earth's surface, enabling the National Weather Service to forecast high ultraviolet index days for public health.

Eyes up
Launched on a Delta II 7920 rocket on July 15, 2004 from Vandenberg Air Force Base, California, Aura is the third and final major Earth Observing System (EOS) satellite. Aura's view of the atmosphere and its chemistry will complement the global data already being collected by NASA's two other Earth Observing System satellites called Terra and Aqua. Collectively, these satellites allow scientists to study how land, water, and the atmosphere work together as a system. Aura takes the space agency's atmospheric research capabilities to a new level of expertise. The ability of its various instruments to discern subtle quantitative and qualitative distinctions in chemical interactions will help experts not only understand how the atmosphere works, but also provide information to policy makers for sound decisions about the future of our world.