Measuring Arctic Air for Clues About Our Changing World
While most of us were cuddled inside by the fireplace these days, dreaming of vacations to warm, sunny spots like Aruba, an international team of scientists consisting of experts from NASA, universities, and government institutions was headed north to the chilly Arctic. There, they took measurements of the winter atmosphere in an effort to improve air quality, ozone, and climate change predictions. 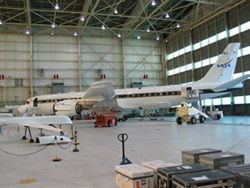 From late January through mid-February, researchers with the Polar Aura Validation Experiment (PAVE) gathered information to validate data from NASA's Aura satellite, launched in July 2004. By studying atmospheric gases, chemistry, and aerosols, which are tiny atmospheric airborne particles like dust and smoke, the researchers hope to discover how these constituents work together to absorb or reflect radiation, influence our air quality and the regulate the Earth's climate.

By focusing on the Arctic region of the Northern Hemisphere, PAVE scientists were able to gather valuable information about atmospheric composition and recovery of the ozone layer. The north polar region is an especially sensitive area on Earth, where vast seasonal reduction in the upper atmosphere's (stratosphere) ozone has taken place for over a decade. 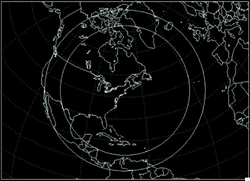 The ozone layer protects us from the Sun's harmful ultraviolet radiation and is vital to life on Earth. Depletion of this protective layer can be harmful to the health of humans, plants and animals. Human-produced pollutants called chlorofluorocarbons (CFCs) emitted into the atmosphere are the main cause of ozone loss. Scientists first discovered dramatic depletions in the ozone layer in 1985. Although recent initiatives by governments around the world have stopped the production of CFCs, damaging chemicals still persist in the upper atmosphere.

Each of these plays an important role in air quality, ozone production and the how Earth's climate can change. For example, the amount of water vapor is a key component in determining how much energy the Earth absorbs or reflects from the Sun. Therefore, it is important for scientists to know how much water vapor exists, to understand how the climate will change. When more solar energy is absorbed, warming occurs, and when more of the Sun's rays are reflected, there is a cooling effect. More accurate measurements of the air's chemistry will also allow for improved short-term air quality and ultraviolet radiation forecasts. Today, meteorologists at the National Weather Service and Environmental Protection Agency alert the public to dangerous levels of low- level ozone or smog, and also issue ultraviolet (UV) index forecasts for sunburn potential. These alerts are only reliable if they are based on high quality data, largely derived from satellites.

The PAVE data will help verify information gathered from the Aura satellite. Combined with NASA's other Earth Observing System satellites - Terra and Aqua, scientists will better understand how land, water, and the atmosphere work together as a system. Aura's various instruments can discern subtle distinctions in chemical interactions, equipping experts with detailed knowledge of our atmosphere and helping policy makers reach sound decisions about our environment.

For more information about the Aura mission on the Internet, visit:
http://aura.gsfc.nasa.gov/

For more information about PAVE on the Internet, visit:
http://cloud1.arc.nasa.gov/ave-polar/