NASA Satellites Unearth Antarctic 'Plumbing System,' Clues to Leaks
Imagine peering down from aboard an airplane flying at 35,000 feet and spotting changes in the thickness of a paper back book on a picnic blanket in New York City's Central Park. If you believe this impossible, NASA satellites are doing the equivalent of just that. From nearly 400 miles above the Earth, satellites have detected subtle rises and falls in the surface of fast-moving ice streams on the Antarctic ice sheet, a capability that also offers scientists an extraordinary view of interconnected waterways deep below that surface. 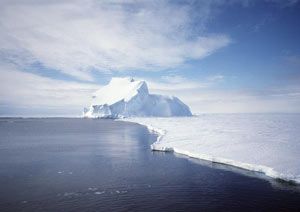 "NASA’s satellite instruments are so sensitive we're able to measure from space changes in the ice sheet's surface elevation of a mere three feet," said Robert Bindschadler, chief scientist of the Laboratory for Hydrospheric and Biospheric Sciences at NASA's Goddard Space Flight Center, Greenbelt, Md., and co-author of a related study published in the Feb. 16 issue of Science.

With the aid of the satellites, Bindschadler and a team of scientists led by research geophysicist Helen Fricker of the Scripps Institution of Oceanography, La Jolla, Calif., revealed a new three-dimensional look at an extensive network of waterways beneath an active ice stream that acts like a natural "plumbing system", and clues to how "leaks" in the system impact the world's largest ice sheet and sea level. They also documented for the first time changes in the height of the ice sheet's surface as proof the lakes and channels nearly half a mile of solid ice below filled and emptied.

"This exciting discovery of large lakes exchanging water under the ice sheet's surface has radically altered our view of what's happening at the base of the ice sheet and how ice moves in that environment," said Bindschadler. 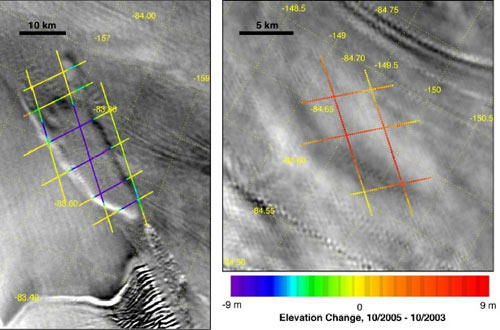 Fricker, Bindschadler and others spotted intriguing discharges of water from the lakes into the ocean. Their research has also delivered new insights into how much water "leaks" from these waterways, how frequently and how many connect to the ocean. Because Antarctica holds about 90 percent of the world's ice, and 70 percent of the world's reservoir of fresh water, "leaks" in this system influence sea level and ice melt worldwide.

The research team combined images from an instrument aboard NASA's Terra and Aqua satellites and data from NASA's Ice Cloud and Land Elevation Satellite (ICESat) to unveil a first-ever view of changes in the elevation of the icy surface above a subglacial lake the size of Lake Ontario that took place over a three-year period. Those changes suggest the lake drained and that its water relocated elsewhere.

To the naked eye, the surface of the ice sheet is very cold and stable, but the base of any of its ice streams is warm, enabling water, melted from the basal ice to flow, filling the system’s “pipes" and lubricating flow of the overlying ice. These waterways act as a vehicle for water to move and change its influence on the ice movement, a factor that determines ice sheet growth or decay.

"There's an urgency to learning more about ice sheets when you note that sea level rises and falls in direct response to changes in that ice,” said Fricker. “With this in mind, NASA's ICESat, Terra, Aqua and other satellites are providing a vital public service."