Antarctic Ice Sheet's Hidden Lakes Speed Ice Flow Into Ocean, May Disrupt Climate
Just as explorers once searched the vast reaches of Africa's Nile River for clues to its behavior and ultimate source, modern-day scientists are searching Antarctica for its hidden lakes and waterways that can barely be detected at the surface of the ice sheet. In a new study, researchers have unearthed how water from this vast subglacial system contributes to the formation of ice streams, and how it plays a crucial role in transporting ice from the remote interior of Antarctica toward the surrounding ocean. Water flowing from this network of under-ice lakes, they say, ultimately affects climate and global sea level. 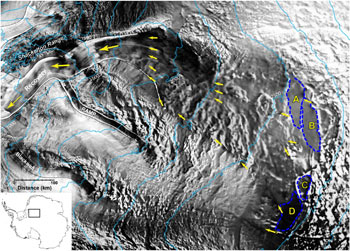 Image right:Combined RADARSAT and ICESat images show the Recovery Glacier Ice Stream (arrows) and location of four new subglacial lakes (A, B, C and D) that lie at the head of the stream. Click image to enlarge. Credit: NASA

A research team led by geophysicists Robin Bell and Michael Studinger from the Lamont-Doherty Earth Observatory of Columbia University in New York City, discovered four large, subglacial lakes miles beneath the Antarctic ice sheet's surface. The team was able to link these lakes for the first time to a fast flowing ice stream above and establish that within this 170-mile wide area the lakes contribute to the creation of a major ice stream. The team, which includes scientists from NASA, the University of New Hampshire, Durham, and the University of Washington, Seattle, published their results in the Feb. 22 issue of Nature.

"This connection of major subglacial lakes to the accelerated pace of ice movement deep in Antarctica’s interior is a key piece of the ice sheet stability puzzle," said co-author Christopher Shuman, a physical scientist in the Cryospheric Science Branch at NASA's Goddard Space Flight Center, Greenbelt, Md. "Given the remoteness of the area, we could not have put the picture together without multiple types of satellite data."

Ice streams are large, fast-flowing features within ice sheets that transport land-based ice and meltwater to the ocean. One such stream, the Recovery Glacier ice stream, annually drains the equivalent of eight percent of the huge East Antarctic Ice Sheet, an area larger than the continental United States. The associated Recovery drainage basin, virtually unexplored since an American-led Antarctic ice sheet research trek over 40 years ago, funnels an estimated 35 billion tons of ice into the Weddell Sea annually.

The scientists used a remote sensing technology called interferometric synthetic aperture radar from the Canadian Space Agency’s RADARSAT instrument to measure the speed of the ice flow. They also used visible imagery from sensors aboard NASA’s Terra and Aqua satellites and high-resolution laser data from NASA's Ice Cloud and Land Elevation Satellite to capture small changes in the landscape characteristics of the ice stream indicating the presence of subglacial lakes beneath the ice.

Not only did the scientists find four new lakes, they discovered that the lakes coincide with the origin of tributaries of the Recovery Glacier ice stream. Upstream of the lakes, the ice sheet moves at just a few feet a year; downstream the flow increases to a third of a mile each year. The research team concluded that the lakes provide a reservoir of water that lubricates the bed of the stream, which speeds the flow of ice, and prevents the base of the sheet from freezing to the bedrock. 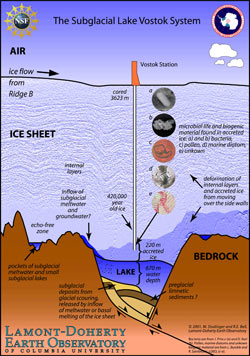 Image left: Lake Vostok lies in the heart of the Antarctic continent hidden beneath miles of ice. As big as Lake Ontario in North America, Lake Vostok is one of the world's biggest freshwater lakes. Lake Vostok has been covered by the vast Antarctic ice sheet for up to 25 million years. Click image to enlarge. Credit: Columbia University, Lamont-Doherty Earth Observatory
"It's almost as if the lakes are capturing the geothermal energy from the entire basin and releasing it to the ice stream," said lead author Bell, a senior research scientist at the Lamont-Doherty Earth Observatory. "They power the engines that drive ice sheet collapse. The more we learn about the lakes, the more we realize how important they are to ice sheet stability."

The team's work also suggests that subglacial lakes play a role in sea-level rise as well as regional and global climate change. "Here we found that meltwater at the base of the ice sheet speeds the flow of Recovery ice to the oceans. In turn, that contributes to higher sea levels worldwide," said Shuman. "Floods have been known to originate from the interior of the ice sheet in the past, possibly from systems like these subglacial lakes. These sudden outbursts of fresh water could potentially interfere with nearby ocean currents that redistribute heat around the globe and could disrupt the Earth's climate system."