Scientists Take Big Steps to Measure Sunlight Reflected by Earth
Have you ever noticed that when the ground is covered with snow and the Sun shines, the edges of snow next to an exposed patch of earth or concrete melt faster? That's because the white snow reflects the Sun's radiation, while the darker earth absorbs it and heats up. Earth's ability to reflect the Sun's light, called albedo, is influenced by the color, type and texture of surfaces ranging from snow, vegetation and urban areas. In order for computer models to simulate and predict our weather and climate in a realistic way, it is vital to have accurate information about albedo for the whole planet. 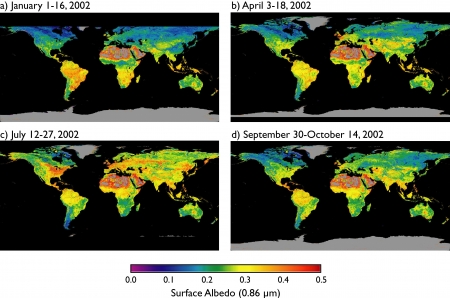 Image above: Complete Snow-free Global Surface Albedos: This frame of images shows the complete snow-free global surface albedos. Each season in 2002 is represented here. Areas that had been covered by snow or obscured by clouds have been estimated and filled in to show a snow-free Earth. Reds and oranges show high albedo where the surface is very reflective, while blues and purples show surfaces that absorbed more light. Click here for a high resolution image (1.8 Mb). Credit: Moody et. al., in press, 2005

At the 85th American Meteorological Society (AMS) Annual Meeting, January 9 through 13, 2005, in San Diego, Calif., NASA and other climate researchers presented findings from their studies of surface albedo during the course of two special sessions. Many of these studies used observations of albedo taken by NASA's Moderate Resolution Imaging Spectroradiometer (MODIS), an instrument aboard both NASA's Terra and Aqua satellites.

Michael King, Earth Observing System Senior Project Scientist at NASA's Goddard Space Flight Center (GSFC), Greenbelt, Md., discussed his work to create snow-free albedo measurements of Earth's surface for the entire globe. Snow and clouds can block clear views of the ground beneath. MODIS, for example, collects surface albedos for the entire Earth every 16 days, but can only obtain snow-free albedos 40-60% of the time. Clouds can obscure entire regions for months on end, as in South Asia during the Indian monsoon season from June through September and in tropical Africa during the rainy season in March through May. In other places, like Siberia and Northern Canada, snow covers the land for the entire winter, making it impossible to see the bare ground underneath.

For those areas where data is hard to get, King and his colleagues estimated values for the Sun's reflected light. One way to fill in the data holes was to look for patches of open earth adjacent to snow or cloud covered areas, or make estimates based on similar surfaces in other locales where the ground cover showed through.

This complete snow-free global dataset is important because computer models require albedo data over Earth's entire surface. Seeing the Earth without snow and clouds is the starting point. Then, the computer simulates seasonal snow and cloud cover based on meteorology, surface radiation, and other complex systems that influence weather and climate.

During the AMS meeting, Crystal Schaaf, a Research Associate Professor in the Department of Geography and the Center for Remote Sensing at Boston University, presented her work on albedo datasets from MODIS, which were used by King to derive his global albedo maps.

Schaaf's data depict the Earth’s reflectivity as actually viewed from space and thus include the albedos of snow-covered surfaces. Before King's global albedo datasets could be prepared, the models used to create them needed to be fine-tuned. To fine-tune them, the datasets needed to account for the different ways surfaces appear when they are viewed from various angles and when they are lit by the Sun at different angles throughout the year.

Urban areas also create special challenges for researchers because of concrete, geometric angles due to buildings and streets, and lack of overall uniformity. Menglin Jin, a visiting scientist at NASA's GSFC, and a researcher with the University of Maryland, College Park, Md., analyzed urban albedos of a select group of global cities, including Houston and Beijing, using MODIS observations from 2000 to present. The data supported the theory that all the asphalt, used for paving parking lots and roads, dark roof shingles, and concrete found in cities absorb more radiation than surrounding rural areas, thereby heating cities and creating urban heat islands.

Jin and her colleagues entered the MODIS albedo data into an atmosphere and land-surface model from the National Center for Atmospheric Research, Boulder, Colo., and found city surfaces had lower albedo, absorbing about 5 to 10 percent more radiation than their rural surroundings. Also, the angle of the Sun's rays had a big impact on albedo over the course of each year, with the most radiation reflected in July, and the least reflected in January.

As researchers conduct more studies like these, our ability to better understand our changing climate and predict our weather will continue to improve.