New NASA AIRS Data to Aid Weather, Climate Research
There's an old saying, "You can't see the forest for the trees." When it comes to global climate change, it's not hard to spot the "trees" -- they're in the news headlines nearly every day. To see the "forest," however--that is, to gain a more complete understanding of the climate variations we're seeing--scientists use satellite remote sensing. With these technologies, they can directly measure factors that affect our climate, such as levels of water vapor and other greenhouse gases, ozone and concentrations of airborne dust. Scientists feed these data into computerized climate models to project how our climate might change in the future. 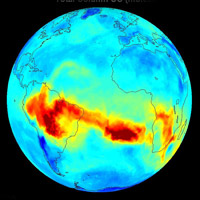 A key contributor to this new generation of climate change research tools is the Atmospheric Infrared Sounder, or AIRS, instrument on NASA's Aqua spacecraft. Developed under the direction of NASA's Jet Propulsion Laboratory, Pasadena, Calif., AIRS measures the key atmospheric gases affecting climate. It's the first in a series of planned advanced infrared sounders that provide accurate, detailed atmospheric measurements for weather and climate applications. Its observations complement existing sensors from NASA and other organizations by providing broad global coverage day and night, even in the presence of clouds.

"These new data will significantly improve our ability to observe and characterize today's climate with greater accuracy, which is key to increasing our confidence in climate prediction models," said Moustafa Chahine, AIRS science team leader at JPL. "With its nearly 2,400 separate frequency channels sensing different regions of the atmosphere, AIRS creates a global, 3-D map of atmospheric temperature, water vapor, clouds and greenhouse gases with the same accuracy currently possible only through direct measurements by sensors on weather balloons." AIRS provides these measurements continuously, all over the globe, including over Earth's vast oceans, where weather balloon data are extremely limited.

Highlights of the new AIRS measurements include:

AIRS provides a global daily 3-D view of Earth's ozone layer, showing how ozone is transported. This is critical to identify events and places at risk of high solar ultraviolet exposure, which affects the health of humans and other living things. The new AIRS infrared imaging gives scientists the best view of the Antarctic region during the polar winter. It also allows scientists to image the transport of stratospheric ozone into Earth's lowermost atmospheric layer, the troposphere, with broader coverage.

Carbon monoxide emissions from the burning of plant materials and animal waste by humans in rainforests and large cities can be seen from space using data from the new AIRS measurements. AIRS sees giant plumes of gas being transported across the planet from these large burns. AIRS provides better global coverage than prior instruments, allowing scientists to better monitor pollution transport patterns. See: http://airs.jpl.nasa.gov/News/Features/Features20060403/ 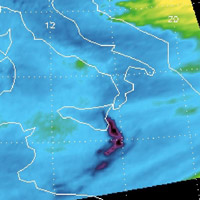 Methane is a much more potent greenhouse gas on a per molecule basis than carbon dioxide and is responsible for five to 10 percent of the greenhouse effect -- the warming of Earth's atmosphere that occurs when radiation from the sun is trapped in Earth's atmosphere by gases. The first released AIRS methane product has not yet been validated, but will allow scientists to assess its value among the few other sources of global data on methane. Eventually, AIRS data will allow scientists to monitor the global distribution and transport of methane and to address key questions about how this gas affects our climate.

AIRS measures dust and aerosols using infrared, or heat-seeking, detectors. Not only does this allow dust to be viewed day and night, but it also helps us better understand the role dust plays in maintaining Earth's thermal energy balance. Dust storms can affect atmospheric chemistry and rainfall patterns, and can transport micronutrients and microorganisms. Changes in land use such as deforestation or overgrazing have contributed to more frequent dust storms worldwide. AIRS provides a global daily view of the infrared properties of dust, monitoring its transport and distinguishing between different types of dust. The new AIRS measurements include a dust warning 'flag' to allow scientists to identify regions of high-dust concentration, worthy of more detailed examination.

AIRS' contributions to the field of weather forecasting have already been considerable. Weather forecasting centers around the world, using less than one percent of available AIRS data, have extended reliable mid-range weather forecasts by more than six hours. These centers have also demonstrated that AIRS can improve forecasts of the location and magnitude of predicted storms. The improved AIRS temperature and water vapor profiles are now available in real time to regional weather forecasters, giving them another source of daily weather measurements for the entire Pacific Ocean, once in the morning and once in the evening. 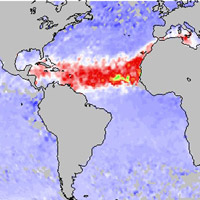 The new AIRS measurements are available on the web at: http://daac.gsfc.nasa.gov/AIRS/index.shtml .

For animations of the new measurements and more information on AIRS, please visit: http://airs.jpl.nasa.gov/ .