A Walk on Topography's 'Wild' Side
Like the ancient parable of the blind men and the elephant, where each man described the animal from the perspective of the part of the beast they could feel, our perceptions of a place can often be clouded by myopia. Only when we can "see" something in its entirety can we truly grasp its significance. The same can be said of Earth's topography. 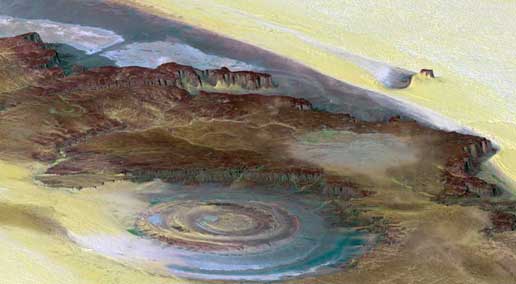 Image above: This prominent circular feature, known as the Richat Structure, in the Sahara desert of Mauritania is often noted by astronauts because it forms a conspicuous 50-kilometer-wide (30-mile-wide) bull's-eye on the otherwise rather featureless expanse of the desert. Initially mistaken for a possible impact crater, it is now known to be an eroded circular anticline (structural dome) of layered sedimentary rocks.
+ Click for full image. Image credit: NASA/JPL/NIMA.

To most Westerners, our views of world regions such as Africa or the Arabian Peninsula are often shaped through the lenses of Hollywood or events depicted on the nightly news. Yet from space, we can see the big picture, and grasp the sheer wonder of our amazing planet.

Now, thanks to the release of the world's most precise digital elevation maps of Africa and the Arabian Peninsula, produced by the joint NASA/National Geospatial-Intelligence Agency Shuttle Radar Topography Mission, the more than 830 million residents of Africa and tens of millions more in the Arabian Peninsula--along with the rest of us--have a powerful new tool from which to better understand this portion of our world.

"The shape of Earth's surface affects nearly every natural process and human endeavor," said Dr. John LaBrecque, manager, Solid Earth and Natural Hazards Program, NASA Headquarters, Washington. "Digital elevation data find their way into a wide range of applications. Among the many benefits of this new data will be an enhanced ability to map and model hazards to human habitation, such as earthquakes, volcanoes, and erosion patterns. For the peoples of Africa and the Arabian Peninsula, having access to precise topographic data will greatly assist the governments of these nations in making smarter, more sustainable, development decisions." 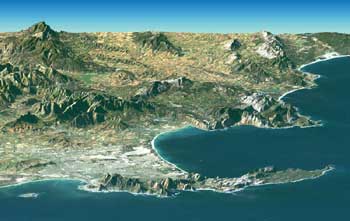 Image left: Cape Town and the Cape of Good Hope, South Africa, appear in the foreground of this perspective view generated from a Landsat satellite image and elevation data from the Shuttle Radar Topography Mission. The city center is located at Table Bay (at the lower left), adjacent to Table Mountain, a 1,086-meter (3,563-foot) tall sandstone and granite natural landmark. + Click for full image. Image credit: NASA/JPL/NIMA.

A land of contrasts, Africa is, from a geographic and topographic perspective, many things to many people. Its topography is among the most varied on our planet, yet many of its finer details were previously obscured--either by persistent cloud cover in some regions or by inaccessible terrain.

A quick tour around the continent reveals the scope of its diversity. Its Olduvai Gorge region is known as the "cradle of humanity," the site of the earliest known human habitation. The arid Sahara is Earth's largest desert. Mt. Kilimanjaro, despite its proximity to the equator, is tall enough to sport glaciers, though they are rapidly melting due to climate change (scientists hope to combine the new elevation data with other satellite imagery of the area to better monitor and understand the environmental changes taking place there). The Great Rift Valley is one of the world's longest earthquake faults. Lake Victoria is the second largest freshwater lake in the world behind the U.S. Lake Superior. The Congo Basin is home to the second largest concentration of rainforests on Earth behind South America's Amazon. And, of course, there are the great savannas, such as the Serengeti, which teem with some of Earth's most exotic wildlife, including plenty of those elephants.

Among the many noteworthy features in the new data are: 1) the Richat Structure in Mauritania, a "bull's eye" geologic structure; 2) the Velingara Ring in Senegal, a possible meteorite impact crater; 3) the delta of the Niger River in Nigeria; 4) the Cameroon Line of volcanoes, crossing Cameroon and extending offshore; 5) long linear mountain ridges crossing the southern end of Africa; 6) Mount Kilimanjaro and neighboring volcanoes in Kenya and Tanzania; 7) the Afar Triangle in Ethiopia, Djibouti, and vicinity, where Earth's crust is being pulled in three directions by tectonic forces; 8) the Dead Sea fault line, between Israel and Jordan; 9) ancient shorelines, inland from the coast of Libya; and 10) vast seas of sand dunes, particularly across the Sahara Desert and much of the Arabian Peninsula.

The new data represents about one-fourth the total data from the mission, whose radar system mapped Earth's topography between 56 degrees south and 60 degrees north of the equator in February 2000. The resolution of the data is three arc-seconds, which is 1/1,200th of a degree of latitude and longitude, or about 90 meters (295 feet).

Dr. Michael Kobrick, Shuttle Radar Topography Mission project scientist at NASA's Jet Propulsion Laboratory, Pasadena, Calif., said the new data are a hot commodity. "Since releasing the Africa/Arabia data set a short time ago, more than 2.25 million files have already been downloaded by the public," he said. "To put that into context, the entire new data set is 3,256 files. That means the entire continent has already been downloaded nearly 700 times. Clearly, the scientific community was eagerly anticipating these data."

For a closer look at some of the highlights of the new data set, you can board your own personal African safari caravan or Arabian magic carpet ride by visiting: