Scientists Confirm Historic Massive Flood in Climate Change
Scientists from NASA and Columbia University, New York, have used computer modeling to successfully reproduce an abrupt climate change that took place 8,200 years ago. At that time, the beginning of the current warm period, climate changes were caused by a massive flood of freshwater into the North Atlantic Ocean. 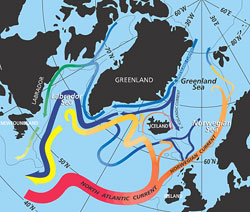 This work is the first to consistently recreate the event by computer modeling, and the first time that the model results have been confirmed by comparison to the climate record, which includes such things as ice core and tree ring data.

"We only have one example of how the climate reacts to changes, the past," said Gavin A. Schmidt, a NASA Goddard Institute for Space Studies (GISS), New York, researcher and co-author on the study. "If we're going to accurately simulate the Earth's future, we need to be able to replicate past events. This was a real test of the model's skill."

The study was led by Allegra LeGrande, a graduate student in the department of Earth and Environmental Sciences at Columbia University. The results appeared in the journal "Proceedings of the National Academy of Sciences" (PNAS) in Jan. 2006.

The group used an atmosphere-ocean coupled climate computer model known as "GISS Model E-R" to simulate the climate impact of a massive freshwater flood into the North Atlantic that happened about 8,200 years ago after the end of the last Ice Age. Retreating glaciers opened a route for two ancient meltwater lakes, known as Agassiz and Ojibway, to suddenly and catastrophically drain from the middle of the North American continent.

Image above: This is a GISS Model simulation of the 8,200 year climate response to freshwater entering into the Hudson Bay. Panels (a) and (b) show the model's simulated changes in surface air temperature and precipitation, respectively. Click image to enlarge. Credit: NASA GISS

At approximately the same time, climate records show that the Earth experienced its last abrupt climate shift. Scientists believe that the massive freshwater pulse interfered with the ocean's overturning circulation, which distributes heat around the globe. According to the record of what are known as "climate proxies", average air temperatures apparently fell as much as several degrees in some areas of the Northern Hemisphere.

Climate researchers use these proxies, chemical signals locked in minerals and ice bubbles as well as pollen and other biological indicators, as indirect measures of temperature and precipitation patterns in the distant past. Because GISS Model E-R incorporates the response of these proxies in its output, the authors of the PNAS study were able to compare their results directly to the historical record.

The researchers prodded their model with a freshwater flow equal to between 25 and 50 times the flow of the Amazon River in 12 model runs that took more than a year to complete. Although the simulations largely agreed with records from North Atlantic sediment cores and Greenland ice cores, the team's results showed that the flood had much milder effects around the globe than many people thought.

According to the model, temperatures in the North Atlantic and Greenland showed the largest decrease, with slightly less cooling over parts of North America and Europe. The rest of the northern hemisphere, however, showed very little effect, and temperatures in the southern hemisphere remained largely unchanged. Moreover, ocean circulation, which initially dropped by half after simulated flood, appeared to rebound within 50 to 150 years.

"The flood we looked at was even larger than anything that could happen today," said LeGrande. "Still, it's important for us to study because the real thing occurred during a period when conditions were not that much different from the present day."

The GISS climate model is also being used for the latest simulations by the Intergovernmental Panel on Climate Change (IPCC) to simulate the Earth's present and future climate. "Hopefully, successful simulations of the past such as this will increase confidence in the validity of model projections," said Schmidt.

The study was funded by NASA, National Defense Science and Engineering Graduate Fellowship, and the National Science Foundation.