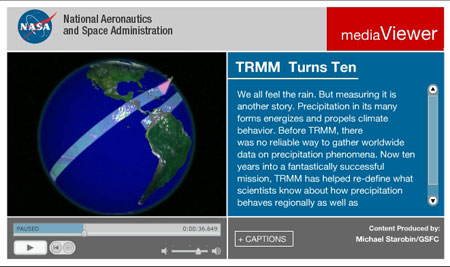 + Click to view animation
How it works—that is, how water circulates, behaves, and interacts is much harder to determine. That’s why there’s TRMM, and this year NASA celebrates the tenth anniversary of this one-of-a-kind spacecraft. Built in cooperation with the Japanese Space agency JAXA, The Tropical Rainfall Measuring Mission has helped scientists re-write the book about profound parts of Earth’s water cycle.

Instruments on TRMM helps scientists look inside the clouds of a hurricane in order to dissect the storm’s structure. This visualization reveals the inner workings of Hurricane Katrina observed on August 28, 2005. This kind of imagery has come to be known informally as “CAT” scans for their resemblance to the medical technology that can peer inside a person’s body. High rainfall rates appear in red, low rates in blue. 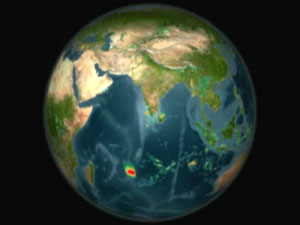 About two thirds of all the planet’s rain falls in the tropics. In this visualization we see the distribution of rainfall worldwide as a moving three hour average, measured between January 1 through December 31, 2005. TRMM contributed a vital component of this overall product. A complete accounting of the world’s total rainfall has long been a major goal of climate researchers. Rain acts as the fundamental means for heat exchange in the atmosphere. Every time a raindrop falls, the atmosphere gets churned up and latent heat flows back into the total climate system. Considering that rainfall is the primary driving force of heat in the atmosphere, and that two thirds of all rain falls in the tropics, these measurements are significant for our understanding of overall climate. 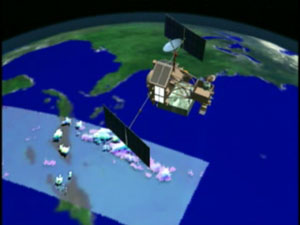 The Tropical Rainfall Measuring Mission is the first Earth Science mission dedicated to studying tropical and subtropical rainfall: precipitation that falls within 35 degrees north and 35 degrees south of the equator. Tropical rainfall comprises more than two-thirds of the world’s total. The satellite uses several instruments to detect rainfall including radar, microwave imaging, and lightning sensors. Flying at a low orbital altitude of 240 miles (400 kilometers) TRMM’s data collection of tropical precipitation helps improve our understanding about climate and weather.

The Japanese space agency (JAXA) launched the satellite on an H-II rocket from Tanegashima Space Center on November 27, 1997.

Now crossing into its second operational decade, TRMM commands a historical pride of place that most other Earth science missions cannot claim. From the very beginning, this one-of-a-kind satellite and the science that goes with it is uniquely a Goddard endeavor. The most obvious expression of this is its construction. While most other research spacecraft are the direct work of designated contractors or other outside parties, civil servant engineers at NASA Goddard directed the completion and constructed the spacecraft almost entirely in-house. They also completed the integration of all the scientific instruments onboard.

But prior to the assembly phase, TRMM’s legacy extends far back in Goddard’s history. The idea for a space based precipitation observatory like TRMM comes from the work of three Goddard scientists. Their initial blue-sky idea turned into formal project proposals, which in turn transformed into actual development plans, build specifications, flight hardware, and, ultimately, operational science platforms on orbit performing far beyond anyone’s expectations.

Goddard maintains the TRMM data archive, and processes most of the information the satellite sends back to Earth. The center also conducts most of the primary science research based on TRMM data.

TRMM based research also serves as a signpost for the future. Soon the science team will be phasing in a new means for analyzing data. Called the PPS, or Precipitation Processing System, this new methodology will help leverage TRMM data against other space based earth observing instruments in order to broaden the range of possibilities for studying precipitation from above. It will also become the processing plan for the upcoming GPM (Global Precipitation Measurement) mission. So even though the hardware and even personnel may change and evolve, the benefits of Goddard’s deep legacy with TRMM will continue to carry forward.