It only skippered the seas of space for a mere three months, but just as Gilligan's "three-hour tour" has continued on in syndication for decades, a salty satellite launched to study the oceans 25 years ago this week by NASA's Jet Propulsion Laboratory, Pasadena, Calif., is living on through the many missions it has spawned. 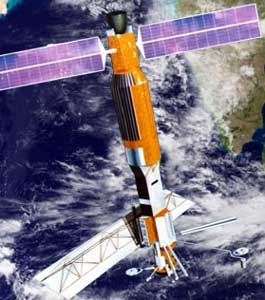 Seasat's tale began in the 1970s when a group of engineers and scientists at JPL began work on an experimental satellite to study Earth and its seas, using technologies being developed to study other planets. The satellite's trip started from the not-so-tropic port of Vandenberg Air Force Base, Calif., on June 26, 1978, aboard an Atlas-Agena rocket. The five "passengers" that set sail that day aboard Seasat included three prototype radar instruments and two radiometers.

Seasat's "weather" got rough 106 days later, when a malfunction unexpectedly ended the mission. Yet during its brief life Seasat collected more information about the oceans than had been acquired in the previous 100 years of shipboard research. It established satellite oceanography and proved the viability of imaging radar for studying our planet. Most importantly, it spawned many subsequent Earth remote sensing satellites and instruments at JPL and elsewhere that track changes in Earth's oceans, land and ice. Its advances were also subsequently applied to missions to other planets.

"Seasat served to vault Earth science to where it is today, advancing the study of such diverse disciplines as land and sea surface topography, ice sheet and land movement, and sea surface winds," said Dr. Frank Carsey, JPL research scientist. "It greatly advanced our understanding of the El Nino and La Nina climate phenomena. It's astonishing to think such a short mission could have such a tremendous impact."

"Seasat had a major impact on future mission planning at NASA and elsewhere," said Tony Spear, Seasat sensor manager. "Its prototype radars and altimeter were precursors for many of today's more powerful Earth observation satellites."

In oceanography, Seasat gave us our first global view of ocean circulation, waves and winds, providing new insights into the links between the ocean and atmosphere that drive our climate. For the first time, the state of an entire ocean could be seen all at once. Seasat's altimeter mapped ocean topography, allowing scientists to determine ocean circulation and heat storage. The data also revealed new information about Earth's gravity field and the topography of the ocean floor. Since Seasat, advanced ocean altimeters on JPL's Topex/Poseidon and Jason missions have been making precise measurements of sea surface height used to study climate phenomena such as El Nino and La Nina. Ocean altimetry has since become part of weather and climate models, ship routing, marine mammal studies, fisheries management and offshore operations.

Seasat's synthetic aperture radar monitored the global surface save field and revealed a wide spectrum of oceanic and atmospheric phenomena from current boundaries to eddies. Seasat's scatterometer gave us our first real-time global map of the speed and direction of ocean winds, which drive waves and currents and are the major link between the ocean and atmosphere. The technology was later used on JPL's NASA Scatterometer and is now flying on JPL's Quikscat spacecraft and its SeaWinds instrument on Japan's Midori 2 spacecraft. The data help forecasters predict hurricanes, tropical storms and El Ninos.

Beyond the oceans, Seasat's synthetic aperture radar provided spectacular images of Earth's land surfaces and geology. Seasat data was used to pioneer radar interferometry, which can pinpoint land surface changes such as those created by earthquakes, and to measure land surface topography. Three JPL Shuttle Imaging Radar experiments flew on the Space Shuttle in the 1980s/1990s. In 2000, JPL's Shuttle Radar Topography Mission used the technology to create the world's most detailed topographic measurements of more than 80 percent of Earth's land surface. Beyond Earth, the technology was used on JPL's Magellan mission, which mapped 99 percent of the previously hidden surface of Venus, and the Titan radar onboard the JPL-built and managed Cassini orbiter to Saturn.

Among the international missions with heritages tracing to Seasat are the current Japanese Earth Resources Satellite 1, the Canadian/U.S. Radarsat and the European Space Agency's Remote Sensing Satellites.

For more information on Seasat, visit the JPL flash site