A Clear Collaboration in Lake Tahoe

Clear water -- Lake Tahoe is famous for it. But over the past 40 years, the lake has been losing its clarity, and the reasons why are murky. "In the 1960s, visibility was about 30 meters (about 90 feet) and it has deteriorated to about 20 meters (about 60 feet)," said Dr. Geoffrey Schladow, associate professor of civil and environmental engineering at the University of California Davis. 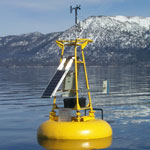 Schladow is a member of the university's Tahoe Research Group, a team of researchers who have been working since the 1950s to understand the dynamics of the lake and what can be done to protect it. For the past three years, they've been getting some extra help from an unusual source -- two rafts and two buoys put in the lake by NASA to help verify satellite measurements.

Equipped with a suite of instruments that constantly monitor the lake environment, the rafts and buoys provide information that not only helps make sure that Earth-observing satellites are getting their temperature measurements right but also serves as a valuable resource for researchers studying the lake.

NASA scientists selected Lake Tahoe as a validation site just before the Terra satellite was launched in 1999 on a 15-year mission to study Earth's environment. They needed a place to measure temperature on the ground to check the measurements the satellite's instruments would make from space. "On the ground" turned out to be the tenth deepest lake in the world.

"Water is the best natural target for validating thermal infrared measurements," said Dr. Simon Hook, who runs the Lake Tahoe validation site. Hook is the project scientist for JPL's Advanced Spaceborne Thermal Emission and Reflection Radiometer (ASTER), one of five instruments flying on Terra. ASTER views Earth with 14 spectral bands, from the visible to the thermal infrared. The instrument's visible bands produce high-resolution images of Earth's surface and clouds. The thermal infrared bands provide temperature measurements, making it possible for ASTER to spot the signs that a dormant volcano may be an awakening or see warm water collect on one side of Lake Tahoe while cold water rises on the opposite shore.

Above: Raft on Lake Tahoe (Click on image for larger version)

"We chose Lake Tahoe for a number of reasons," said Hook. "It is large, big enough to accommodate different satellite footprints. In the thermal infrared, the smallest area that ASTER can see is 90 meters, for example, while the Moderate Resolution Imaging Spectroradiometer, another instrument on Terra, has a much larger 1-kilometer footprint. Lake Tahoe is high up, so there is less atmosphere to get in the way. It doesn't freeze in the winter, and fresh water is kind to instruments, unlike salt water. We also knew that UC Davis had a research station there and there might be a possibility for some collaborative work."

The validation fleet consisted of two JPL-built rafts and two modified buoys, donated by the National Oceanic and Atmospheric Administration (NOAA). The rafts and buoys are the only permanently moored objects in the lake. Each is a mini-research vessel. They have a radiometer that can measure the lake's surface temperature to within 0.05 of a degree; a temperature sensor trailing in the water that measures the lake's temperature at depth; and meteorological equipment that determines air temperature, wind speed and direction, pressure, relative humidity, and net radiation -- "which tells you whether it is sunny or not," explained Hook. Power comes from two solar panels. California's Air Resources Board has recently added an air sampler to the vessels, and the University of California Davis group has put on a deposition sampler, to see what is coming into the lake from the air.

Above: ASTER apparent temperature image of Lake Tahoe on June 3, 2001 (Click on image for larger version)

Data from the temperature probes and the radiometer are collected every two minutes, seven days a week, and stored onboard. Each day at noon Hook's computer dials a cell phone on each vessel and up-loads the latest data, which Hook make available to researchers on-line. They're also used by the National Weather Service and the U.S. Coast Guard, which has a station on the lake.

"ASTER is always being tweaked," said Hook. "We use the Tahoe data to be sure the correction is right. We also use it for spot checks on Terra's Moderate-resolution Imaging Spectroradiometer and on other satellites, including Landsat 5, Landsat 7, the Department of Energy's Multispectral Thermal Imager, and the European Along Track Scanning Radiometer on Envisat." NASA's Aqua satellite, launched in May 2002 is also validated by the Tahoe site.

"A different satellite goes over the lake every day if not several times a day. Not only can we see how a particular satellite is doing but how satellites compare," said Hook.

"NASA could have come here just to get the validation data," said Schladow, who has been studying Lake Tahoe for the past eight years," but that data had uses beyond satellites. Doing the validation provides a lot of details that help us understand the lake circulation."

"One of our major issues is lake clarity," said Schladow. "While it is still brilliant, it is very much at risk." He and his colleagues have been looking at many different factors that might cloud Tahoe's waters. "Too many nutrients in the water were once thought to be a problem, but in the past couple of years we started finding that fine sediment has a larger effect on clarity," he said. They've been developing three-dimensional models of lake circulation to see how sediments, nutrients, or other factors might contribute to the problem and what can be done to control it.

The temperature data collected by the satellite validation rafts and buoys have become important tools in developing and testing their circulation models, as are the satellite images they help to verify. "Most lake data is 'point' data, or measurements from just one spot," said Schladow. "Remote sensing shows what's happening over the whole lake. For example, 63 streams go into Lake Tahoe, and that's difficult to measure. A single satellite image shows them all, including such details as temperature changes and algal growth. Combining these two resources -- measurements from the ground and from space -- is very powerful."

"The validation data acted as a catalyst" said Hook. "It's a wonderful test to see what satellite imaging can do for us. We're just starting to see the potential."