Instruments aboard NASA's suite of Earth-observing satellites kept a close watch on Hurricane Isabel last week as it churned toward the East Coast of the United States. Scientists used these space-based tools to look inside Hurricane Isabel and assess the storm's impact.

Hurricanes act as heat engines, drawing energy up from warm tropical ocean waters to power the intense winds, powerful thunderstorms, and immense ocean surges. These tools help weather experts determine if a tropical cyclone is likely to strengthen or weaken and how much rain will fall on land.

Warm water fuels hurricanes. Hurricanes drive on 82° F or warmer sea surface temperatures. NASA satellites can detect sea surface temperatures through clouds and helps determine if a tropical cyclone is likely to strengthen or weaken. In this visualization, Hurricane Fabian runs through a large patch of warm water, orange and red indicate 82° F and warmer, and leaves a blue cold trail behind. Cold trails can sometimes weaken tropical storms. However, Hurricane Isabel took a different path fueling up on warm water next to Fabian's cold trail, and leaving another cold trail behind. Aqua satellite's Advanced Microwave Scanning Radiometer (AMSR-E) provided sea surface temperatures for the animation above. Data runs from August 22 to September 15, 2003. AMSR-E was developed by the National Space Development Agency (NASDA) of Japan.

The eye of a hurricane may be the calm of the storm, but it also houses the engine that drives the storm. NASA and National Space Development Agency (NASDA) of Japan's Tropical Rainfall Measuring Mission (TRMM) satellite looked under Isabel's hood and showed scientists the pistons that power the hurricane, giving them an idea of the intensity and distribution of rainfall.

NASA satellites captured many different perspectives of Hurricane Isabel. Twice a day, every day, two satellites, Aqua and Terra , fly over the planet capturing highly detailed images of the Earth. 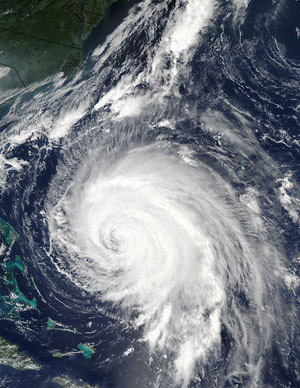 The animated sequence shows eight days of high-resolution images of Hurricane Isabel. These images are so detailed that you can see the wind vortices inside the eye. These images were captured September 8, 10,11,12, 14, 15, 16, and 17, 2003.

Check the National Hurricane Center for the latest storm forecasts.