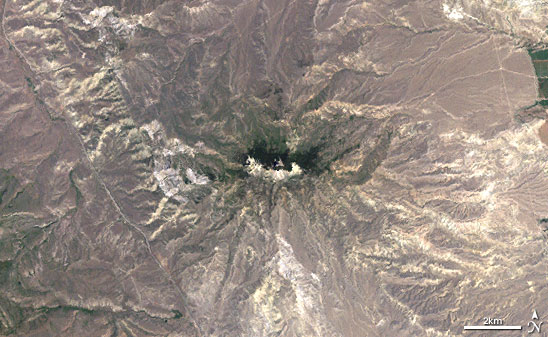 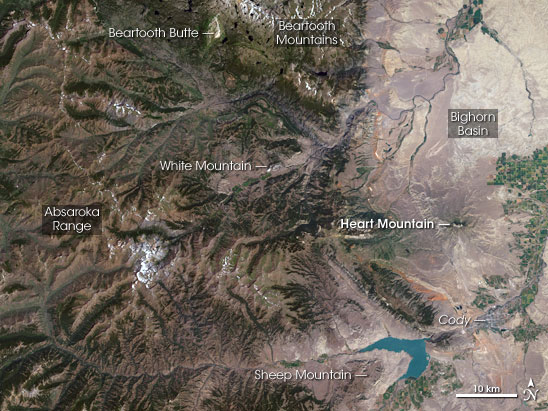 Heart Mountain is a dramatic, 8,123-foot (2,476 meter) peak just north of Cody, Wyoming on the floor of the Bighorn Basin. The mountain is composed of limestone formed several hundred million years ago, but it rests on the "Willwood Formation," rocks that are only about 55 million years old. For older rocks to rest on top of younger rocks is rare; in general, the top layers of a rock formation formed most recently, and the rocks of deeper layers are older. So why is the rock on the summit of Heart Mountain at least 250 million years older than the rock at the base?

The turbulent geologic history of northwestern Wyoming hints at the solution to this geologic mystery. The Madison Limestone that now forms Heart Mountain was laid down on top of layers of dolomite and ancient granite more than 300 million years ago when the area was covered by a large tropical sea. More than 50 million years ago, the Madison Limestone--more than 1,500 feet (460 meters) thick in places--lay about 25 miles (40 kilometers) to the northwest, where the Beartooth Mountains and eastern Absaroka Range now stand.

Around 50 million years ago, a period of mountain-building began along the western edge of the Bighorn Basin, raising the Beartooth Mountains. This mountain-building coincided with a series of eruptions that formed the now extinct volcanoes of the Absaroka Range. The rocks beneath the Madison Limestone were lifted and tilted from west to east. At some point a giant sheet of limestone--perhaps 500 square miles--detached and slid southeast towards Bighorn Basin. Scattered remnants of the limestone, such as Beartooth Butte and White Mountain, remained in place. Most of the sheet, such as Sheep Mountain and Heart Mountain, fractured into blocks and came to rest on the younger rocks on the floor of the Bighorn Basin.

Although the general story of the movement of Heart Mountain is known, the specifics remain a mystery. Was the slide triggered by an earthquake or volcanic eruption, or just the steady pull of gravity? Did it occur catastrophically with a sudden collapse, or was it a slow slide over hundreds of thousands of years? Why do the displaced blocks of limestone appear almost unscathed by the effects of their slide? Geologists continue to debate these questions and to develop new theories about how the Earth of the past became the Earth of the present.

This true-color image of Heart Mountain and the surrounding area was acquired on July 24, 200 by the Enhanced Thematic Mapper plus aboard NASA's Landsat Satellite.

For more images and stories about the Earth, visit NASA's Earth Observatory.