Hurricane Frances Roars
Hurricane Frances continues to grind through the warm waters of the Caribbean, throwing its weight around with 120 mph winds and lashing rains. Its top sustained winds are down from about 145 mph on Thursday, but forecasters warn that Frances could still regain its former strength. Seen from space, this storm is a well-organized giant. Using a fleet of advanced instruments, NASA continues to track the storm as it makes its way toward the East coast of the United States. 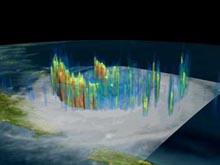 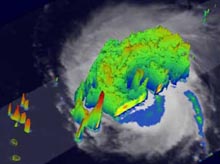 NASA's TRMM satellite (Tropical Rainfall Measuring Mission) can see hurricanes in three dimensions. Looking down from its near Earth orbit, the vehicle is unique in the space agency's fleet of Earth observing instruments. Here we see Frances depicted two different ways, each showing aspects of the storm's inner structure. Red colors indicate regions of the most significant rainfall. Notice the spires stretching up in to the sky. These "hot towers" suggest an efficient and powerful heat engine inside the storm, emphasizing to experts just how powerful this particular tropical beast may be. 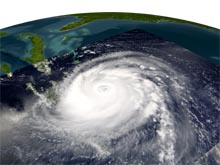 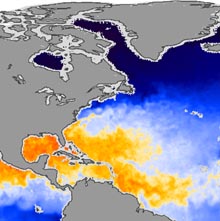 Image Above: Satellite image of sea surface temperatures (SST) around Florida and the Gulf of Mexico. Orange and red colors represent SST of 82 degrees F or warmer. Click image to see animation of SST from January to September (1.6 Mb).

Hurricanes depend on warm water for life. Ocean water must remain above 82 degrees Fahrenheit for a hurricane cannot survive. That’s why hurricanes tend to occur in the late summer and early autumn. By then water in the tropical ocean has had months to absorb the sun’s energy.

In the SST animation (1.6 Mb) we see data gathered by an instrument on the Aqua satellite. The beginning of the sequence starts in January. Notice how the ocean color in the Caribbean is mostly blue, indicating relatively cool temperatures. But as the year progresses, ending in early September, we see a dramatic increase warm water. The wide orange and yellow region on the screen is precisely the zone that fortified Frances at it pushed its way in to the United States.

A Fleet of Earth Observing Instruments 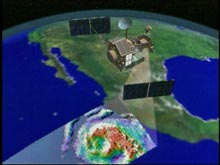 NASA maintains an advanced fleet of satellites and world-class scientists tasked with the goal of better understanding the mechanics and behaviors of our home planet.

Among the vehicles that collected information about Hurricane Frances, the satellite called TRMM continues to produce unique and powerful results. Aqua is one of a pair of large Earth observing platforms. Along with its sibling satellite Terra, it can monitor a variety of data across the length and width of the globe, helping scientists study the interrelationships of various planetary processes.

Earth science continues to be a mainstay of the space agency's mission. In an effort to protect life on planet Earth, NASA continues to pursue science of the future even as it delivers vital, up to the minute information about our world today.