How on Earth Was This Image Made?
Here Are Some Hints... 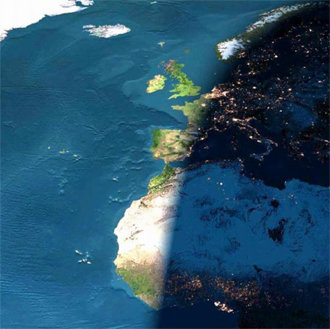 This image shows the Earth's surface, apparently from space -- but is it really a photograph?
Copyright The Living Earth.)


This image presents a remarkable view of the North Atlantic Ocean, stretching from the equator and western Africa northward to Iceland and Greenland, with sunset occurring over Scandinavia, France, Spain, Algeria, Mali, and the Ivory Coast. But is it a photograph? If so, was it taken from space? Is it a painting, a map, or something else? How can you tell?

Look at the Ocean
Features on the sea floor are visible, including the continental shelf, and fracture zones associated with the Mid-Atlantic Ridge. Think about your beach trips: How deep is the water at the beach before you can't see the bottom any more? Visibility is about a meter (3 feet) on the typical beach, ten meters (33 feet) in the clear waters such as the Caribbean. Since the average depth of the oceans is 4000 meters (13,000 feet), even the most sensitive camera could not see the sea floor except along the very edge of the coast, and in exceptionally shallow areas.

Where are the Clouds?
Earth is a very cloudy planet -- at any given time two thirds of the planet is covered by clouds. Look for yourself at the current cloud cover over Europe and North Africa from METEOSAT, a weather satellite 37,000 km (23,000 miles) above the Earth. However, this image is cloud free, suggesting that the image is a combination of many images with cloud-free sections, or that it was created by instruments that can see through clouds.

Clues on the Ground
Areas with plants are green, and deserts are yellow, which is similar to what we would see with our eyes, or in a photograph. But the green vegetation is very bright. Plants absorb up to 95 percent of the visible light that falls on their leaves, so when observed from space in the visible part of the light spectrum, heavily vegetated landscapes appear very dark...almost black. On the other hand, near-infrared light -- light with a wavelength just a little bit longer than red light, and invisible to our eyes-is reflected strongly by plants. Weather satellites that detect red and near infrared light have been collecting data for over twenty years -- long enough to produce excellent cloud-free composite images. Furthermore, red and near-infrared data can be combined in a way to simulate color imagery. 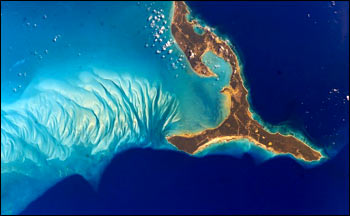 This photograph taken from the International Space Station shows the shallow sand bars to the west (left side) of Eleuthera Island in the Bahamas. The water there is only a few feet deep. To the east (right side) the seep water is a pure blue -- no subsurface features are visible. (Image ISS004-E-8777 Credit: NASA Gateway to Astronaut Photography of Earth.)


Like Night and Day
Now look at the terminator -- the line separating the sunlit side of the Earth from the nighttime areas. The city lights on the night side are brighter than the day lit countryside! Cameras and scientific instruments can also only detect a limited range of brightness at one time, so it is impossible for one photo to show detail in the daytime and nighttime simultaneously. To date, only one spacecraft (the Defense Meteorological Satellite Program) has been able to map lights at night. The city light data does not contain any surface features, so they must be combined with a daytime surface image (shaded to simulate a nighttime view) to create a "night side" Earth. This night side image was then combined with the daytime composite image, with a computer-generated terminator separating the two. 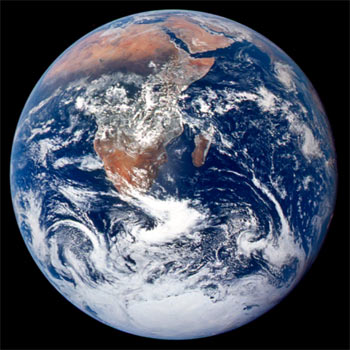 This classic photograph was taken on December 7, 1972 by the Apollo 17 crew traveling toward the Moon. The belt of vegetation that crosses Africa below the Sahara is very dark because most of the sunlight is absorbed by plants for photosynthesis.
Photograph courtesy NASA Gateway to Astronaut Photography of Earth 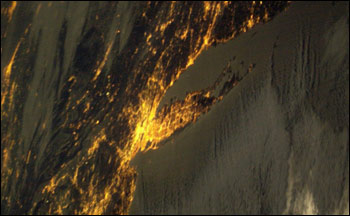 The bright gold lights of New York City and its surrounding suburbs stand out in this nighttime photograph from the International Space Station. The bright surfaces of clouds and snow are revealed by moonlight. Photograph courtesy NASA Gateway to Astronaut Photography of Earth. 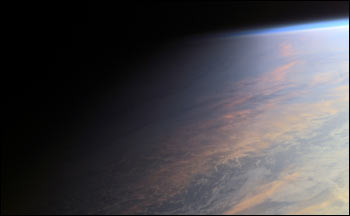 The Earth's terminator separates the day side from the night side. This photograph from the International Space Station shows high clouds tinted warm pastel colors by the setting (rising?) sun. The light gradually fades along the curvature of the Earth, until it is pitch black on the night side. Image ISS002-E-7377 courtesy NASA Gateway to Astronaut Photography of Earth.

Final clues about this image's origin are provided by the image field-of-view, which encompasses a sweeping territory extending from the equator north to about 65 degrees North latitude, and roughly 60 degrees of longitude from 30 degrees East (the mid Atlantic) to 30 degrees West...a footprint of more than 6500 km (4000 miles) to a side. The Space Shuttle and International Space Station fly at an altitude of about 375 km (230 miles). Even from this altitude, the widest view that can be captured by a camera looking obliquely is a footprint that is roughly 1500 km (930 miles) on a side. Satellites such as weather satellites in geosynchrounous orbit 37,000 km (23,000 miles) above the Earth's surface) have sweeping views of large portions of the planet, but the only people to have seen such a broad view of the Earth were the Apollo astronauts on the way to the Moon. 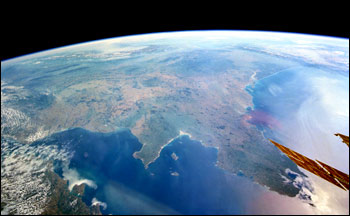 This view of Normandy (left) and Brittany (right) along the Atlantic coast of France shows the curve of the Earth's surface from the Space Shuttle in low Earth orbit. Taken at an oblique angle, this is an example of the widest possible area that can be seen from either the Space Shuttle or International Space Station. Also, clouds shroud Britain. Image courtesy NASA Gateway to Astronaut Photography of Earth

By dissecting this image, we've learned that it is composed of many elements, collected by a variety of instruments, at different times and places, with several wavelengths of light (and even sound) -- combined in a computer to create an "impossible" view of the Earth. Scientists use images like this -- called visualizations -- to interpret complex data, and communicate their understanding to others.

The image itself was generated by the Earth and Moon Viewer, a Web-based tool that produces Earth imagery from several perspectives. The Earth daylit and night-time images were developed by The Living Earth.