A Season in the Life of the Antarctic Ozone Hole:
A Quarter Century of Satellite Measurements by TOMS
Since 1979, scientists studying ozone have received invaluable data from NASA's Total Ozone Mapping Spectrometer (TOMS). This information, combined with ground-based observations of overhead ozone, was essential in determining the root cause of ozone loss over the Antarctic--man-made chlorofluorocarbons (a compound consisting of chlorine, fluorine, and carbon) and halons (a compound consisting of bromine, fluorine, and carbon). While the manufacture and use of these products in such as refrigerants, has declined significantly since the 1970s, it will take several decades before they fully dissipate.

Each year, the Antarctic "ozone hole," a dramatic thinning of ozone, begins opening in July and shrinking in November. Between March 21st and September 21st, the South Pole becomes tilted away from the Sun (the "polar night"), allowing lower temperatures to cool in the Antarctic stratosphere. As a result, by late May, thin polar stratospheric clouds (PSCs) form. At the edge of the ozone hole, near the polar vortex boundary, warmer temperatures lead to fewer PSCs and the associated ozone loss is not as severe. 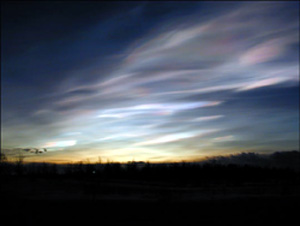 Above: Polar Stratospheric Clouds near Kiruna, Sweden. Scientists recently discovered that polar stratospheric clouds, long known to play an important role in Antarctic ozone destruction, may be occurring with increasing frequency in the Arctic. These high altitude clouds that form only at very low temperatures help destroy ozone in two ways—they provide a surface which converts benign forms of chlorine into forms that lead to ozone destruction, and they remove nitrogen compounds that moderate the destructive impact of chlorine. In recent years the atmosphere above the Arctic has been colder than usual, and polar stratospheric clouds have lasted into the spring. As a result, ozone levels have been decreasing.

In August, as sunlight begins to increase, its energy initiates chemical reactions that cause the chlorine and bromine molecules to convert ozone molecules into oxygen molecules, while regenerating themselves (known as the catalytic cycle). Through this process, a single chlorine molecule can lead to the destruction of about 1000 ozone molecules.

By late September, the ozone loss peaks and the ozone hole over the Antarctic reaches it maximum size. In the middle of the ozone hole, the chlorine and bromine molecules have completely destroyed all of the ozone in a layer between 12 and 20 km (7.4 and 12.4 miles). Some ozone remains above 20 km and below 12 km.

Ozone losses continue through mid-October, until we're left with a massive region of low ozone levels over Antarctica. Weather patterns also begin to change, particularly the movement of high and low pressure systems. Thus, high-altitude winds begin to weaken and temperatures continue to warm. The warming temperatures cause the PSCs to evaporate, stopping the conversion of chlorine into reactive forms, and thereby stopping ozone loss.

Left: Ozone Destruction. Once in the stratosphere, the chlorofluorocarbon (CFC) molecules are no longer shielded from ultraviolet radiation by the ozone layer. Bombarded by the Sun's ultraviolet energy, CFC molecules break up and release their chlorine atoms. The free chlorine atoms then can react with ozone molecules, taking one oxygen atom to form chlorine monoxide and leaving an ordinary oxygen molecule. Click animation to see chemical reactions 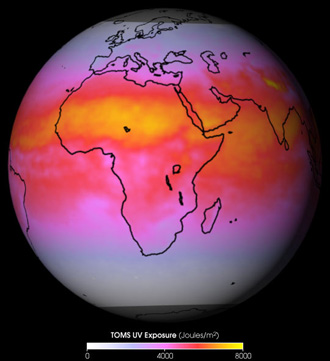 Above:Ultraviolet Radiation Exposure. NASA’s Total Ozone Mapping Spectrometer (TOMS) provides measurements that enable scientists to accurately estimate how much of the Sun’s UV-B (290 to 320 nm) radiation reaches the Earth's surface. Too much exposure to these wavelengths causes sunburn in human skin. The false-color image above is a global map, averaged from TOMS snapshots collected every day over a one-month period, showing where more or less UV radiation reaches the surface. Yellow pixels show the highest levels of radiation at the surface, red and pink hues are intermediate values, and white indicates little or no UV exposure.

TOMS tracks solar ultraviolet (UV-B) rays. Research has proved that increased exposure to these rays, especially in southern continents, can lead to major consequences for phytoplankton and other species. Even more alarming, the reduction in stratospheric ozone has also been linked to skin cancer in humans.

Recently, in the winters of 2003, 2000, and 1997, adverse biological effects on plants and animals were noted in many populated areas, including northern Europe, due to large Arctic ozone losses. Also, during the 1999-2000 winter, extremely low Arctic temperatures enabled PSCs to last longer, leading to record ozone loss. 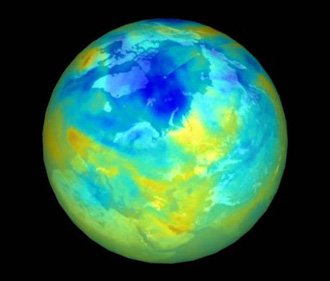 Above: Low Arctic Ozone Level Winter 1999/2000: Ozone levels in the stratosphere over the North Pole were very low during winter. In this image using data from NASA's TOMS Earth Probe, blue regions represent the difference between ozone levels observed in the early 1980s and the 1999/2000 winter. 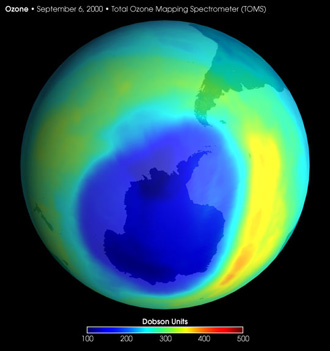 Continuous long-term monitoring of ozone levels and additional research are crucial in determining how much ozone loss is attributable to human activities or merely the result of natural, atmospheric phenomenon. Periodic or short-lived reductions in ozone loss are not likely a signal of improvement. Instead, scientists say changes in meteorological conditions are partially responsible for the year-to-year variations in the size and depth of the ozone.

A new NASA satellite, Aura, scheduled for launch in spring 2004, promises to build on the successes of TOMS. It will provide scientists a three-dimensional view of atmospheric ozone distribution by tracking ozone and other gas transport between the lower and upper atmosphere, rather than in just isolated sections of the atmosphere. Aura's instrumentation will also carry higher spatial resolution than TOMS, allowing air quality to be studied at the city level.