2005: A Hurricane Season 'On Edge'
Millions of lives were changed by the record-setting 2005 Atlantic hurricane season - a "worst case scenario" for the United States. The 27 named tropical storms beat the old record of 21 in 1933. Five hurricanes (Dennis, Katrina, Ophelia, Rita and Wilma) and three tropical storms (Arlene, Cindy and Tammy) directly impacted the country: destroying lives, demolishing homes and wrecking the landscape. More than a thousand people lost their lives and many more were left battered, broken, displaced or homeless. Entire neighborhoods were wiped out by the combination of strong winds, heavy rain, storm surge and floodwaters. 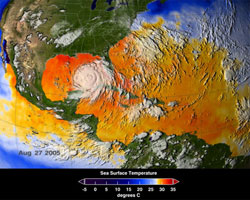 Image/animation to right: Warm ocean waters fuel hurricanes, and there was plenty of warm water for Katrina to build up strength once she crossed over Florida and moved into the Gulf of Mexico. This image depicts a 3-day average of actual sea surface temperatures (SSTs) for the Caribbean Sea and the Atlantic Ocean, from August 25-27, 2005. Every area in yellow, orange or red represents 82 degrees Fahrenheit or above. A hurricane needs SSTs at 82 degrees or warmer to strengthen. The data came from the Advanced Microwave Scanning Radiometer (AMSR-E) instrument on NASA's Aqua satellite. Click on image to view an animation which depicts the sea surface temperatures for the period June 9 through August 9, 2005. Also note the different tracks of Hurricanes Dennis, Emily, and at the very end Katrina - no audio (9.9 Mb). Credit: NASA/SVS

While an active hurricane season was anticipated by meteorologists and experts at the National Hurricane Center, the destruction and sheer number of storms was simply overwhelming. Many residents, particularly in the southeastern U.S., were under a state of alert that lasted for months. As early as late July, more than a month before the peak of the season, seven storms had already formed, including two Category 4 storms that formed in rapid succession (Hurricanes Dennis and Emily). Typically the waters of the Gulf of Mexico are too cool at that point in the season to support such storms. However in 2005, warmer-than-normal sea surface temperatures combined with paths over very warm ocean currents which enabled many storms to rapidly intensify.

By season's end, 14 hurricanes had formed, beating the previous record of 12 in 1969. 2005 also had the most Category 5 storms with three (Katrina, Rita, and Wilma). Seven storms were major hurricanes-category 3 or higher-of which a record four hit the United States (Dennis, Katrina, Rita, and Wilma). And, for the first time since the current hurricane naming system was introduced in 1953, all 21 names on the list were exhausted, forcing the National Hurricane Center to name six late storms after Greek letters. An average season typically has only 11 named storms, including six hurricanes. 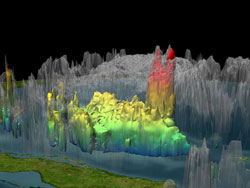 Image/animation to left: NASA's TRMM spacecraft allows us to look under Hurricane Rita's clouds to see the rain structure on September 19, 2005 at 15Z. Spikes in the rain structure known as 'hot towers' indicate storm intensity. 'Hot Towers' refers to tall cumulonimbus clouds and has been seen as one of the mechanisms by which the intensity of a tropical cyclone is maintained. Because of the size (1-20 km) and short duration (30 minute to 2 hours) of these hot towers, studies of these events have been limited to descriptive studies from aircraft observations, although a few have attempted to use the presence of hot towers in a predictive capacity. Before TRMM, no data set existed that could show globally and definitively the presence of these hot towers in cyclone systems. Aircraft radar studies of individual storms lack global coverage. Global microwave or Infrared sensor observations do not provide the needed spatial resolution. With a ground resolution of 5 km, the TRMM Precipitation Radar provided the needed data set for examining the predictive value of hot towers in cyclone intensification. Click on image to view animation - no audio (7.3 Mb). At the time the data was taken, this storm was classified as a Tropical Storm with winds off 55 knots and a pressure of 994mb. The existence of these 18 km towers in the eye wall alerted researchers that this storm was going to rapidly intensify. Within 48 hours of this dataset, the storm was a very strong category 4 hurricane. Credit: Lori Perkins/NASA

Hurricane Katrina was the costliest hurricane to ever strike the U.S. with at least $80 billion in damage, and two others (Wilma and Rita) made the top 10. Levees failed after Katrina made landfall east of low-lying New Orleans on the morning of August 29, inundating the city with floodwaters. The scenes along the Louisiana, Mississippi and Alabama coasts were incomprehensible: entire neighborhoods wiped out; debris rotting on the sides of streets; families sleeping in tents; sickness due to mold, mildew, and rot; and the loss of human life, centuries-old landmarks and industry. With more than 1300 deaths in four states, Katrina was also the deadliest U.S. hurricane since 1928. 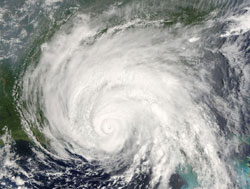 Image to right: Hurricane Dennis was bearing down on the Gulf Coast of the United States on July 10, 2005, at 12:15 p.m. (16:15 UTC) when the Moderate Resolution Imaging Spectroradiometer on NASA’s Terra satellite captured this image. With winds of 135 miles per hour (217 kph), Dennis was a powerful Category 4 storm just hours away from making landfall. At the time this image was taken, the eye of the storm was about 55 miles (90 kilometers) south, southeast of Pensacola, Florida, and the storm was moving northwest at about 18 miles per hour (29 kph). The size of the storm put clouds of rain over most of the southeastern United States well before the storm came ashore. In this image, Dennis covers all of Florida, Alabama, Mississippi, and stretches over parts of Louisiana. The northern fringes of the storm appear to be over Tennessee and North Carolina. Credit: NASA

Katrina's evil twin, Wilma, was born in October. Recording a pressure of 882 millibars (mb) while still at sea, she is the strongest of any recorded Atlantic hurricane. The measurements are made by a sophisticated instrument packages called "dropsondes." Dropsondes are dropped into the eye of the storm from National Oceanic and Atmospheric Administration (NOAA) research aircraft. Measurements of Wilma were taken shortly after a period of rapid strengthening to Category 5 intensity. These are extraordinarily low values, as the normal surface pressure is around 1013 mb. The sea-level value in the eye of Wilma would be equivalent to the pressure level in an un-pressurized airplane at an altitude of about one mile. 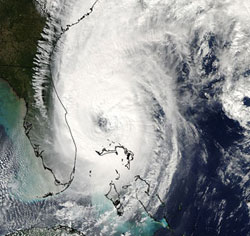 Image to left: This image was captured by the MODIS instrument on the Aqua spacecraft on October 24, 2005. It shows Hurricane Wilma departing Florida after crashing into the western side of Florida early that morning. Click image to enlarge. Credit: NASA

Wilma also possessed a rare "pinhole eye," an eye so tiny (about four miles across) that it was barely discernable on satellite imagery. This unique feature coincided with two near-world record pressure drops - deepening 8 mb in just one hour (for nine consecutive hours) and 95 mb in 24 hours. Researchers have made remarkable advances in predicting hurricane tracks and landfall, however, forecasting changes in a hurricane's intensity continues to be a challenge because the physics behind such explosive intensifiers is still not well understood.

To the despair of many, the relentless season of 2005 did not end until the first week of January 2006. While never a threat to land, tropical storm Zeta formed on December 30, a month after the official end of the season, tying 1954's Alice as the latest-forming storm. Briefly reaching hurricane status, Zeta became the first storm to ever survive so long in January, before it finally dissipated on January 6. 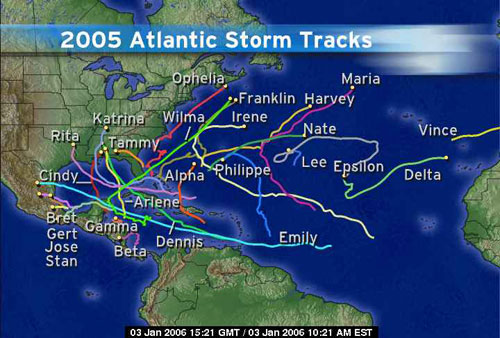 Image above: This graphic shows the tracks of all the hurricanes from the 2005 hurricane season which began June 1 and officially ended November 30, although several more storms occurred after that date. Credit: NOAA
While the amount of hurricane activity in 2005 was certainly unusual, forecasters say we should be prepared for seasons with above average activity over at least the next decade. The Atlantic Basin is in the active phase of a multi-decadal cycle that began in 1995, in which conditions in the ocean and atmosphere, including abnormally warm sea-surface temperatures and low wind shear, provide the necessary ingredients for hurricane formation. Similar conditions were also in place during the active era of 1926-1970.