NASA Finds Life at 'Extremes'
Hundreds of feet under the Alaska tundra, NASA astrobiologist Dr. Richard Hoover ignores the eerie silence of the icy tunnel around him, even ignores the bones of woolly mammoths and steppe bison jutting here and there from the jagged walls, frozen where they died tens of thousands of years ago… about the time Homo sapiens began to assert dominance over the prehistoric planet.

Forget the fossils. Instead, Hoover is poring over pale blue and white patches covering an ice wedge in the tunnel wall. It's a microbial community of bacteria and fungi, growing in total darkness, thriving at temperatures that have hovered below freezing for thousands of years. 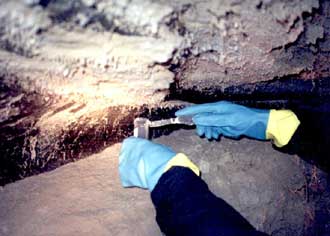 For Hoover and his colleagues, proof of life is the real find, especially in a subterranean tomb, sleeping under ice from the Pleistocene Age. In this unlikely place, they discovered a new life form, a never-before-seen bacterial species they have dubbed Carnobacterium pleistocenium. It's roughly 32,000 years old.

And it's still alive.

The bacterium--the first fully described, validated species ever found alive in ancient ice--is NASA's latest discovery of an "extremophile." Extremophiles are hardy life forms that exist and flourish in conditions hostile to most known organisms, from the potentially toxic chemical levels of salt-choked lakes and alkaline deserts to the extreme heat of deep-sea volcanoes and hydrothermal vents.

NASA and its partner organizations study the potential for life in such extreme zones to help understand the limitations of life on Earth and to prepare robotic probes and, eventually, human explorers to search other worlds for signs of life.

That search is a key element of the Vision for Space Exploration, the ambitious effort to return Americans to the Moon and to conduct robotic and human exploration of Mars and other worlds in our Solar System, which might conceal life forms unimaginable to us--thriving in conditions few Earth species could tolerate.

In 1999 and 2000, Hoover, a researcher at NASA's Marshall Space Flight Center in Huntsville, Ala., time-traveled back to the Pleistocene via the U.S. Army's Cold Regions Research and Engineering Laboratory, or "CRREL tunnel." The research site near Fox, Alaska, just north of Fairbanks, was carved by the Army Corps of Engineers in the mid-1960s to enable geologists and other scientists to study permafrost--the mix of permanently frozen ice, soil and rock--and to develop drilling techniques in preparation for construction in the early 1970s of the Trans-Alaska Oil Pipeline. 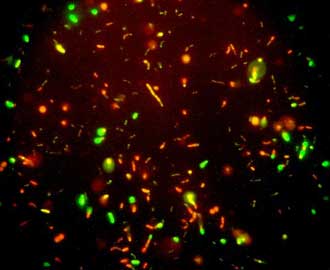 Image at right: Seen under a microscope, a new bacterium identified by NASA astrobiologist Dr. Richard Hoover and his colleagues thrives--despite having been thawed from ice dating back some 32,000 years, to the Pleistocene era. Living bacteria are stained green. Image credit: University of Alabama at Birmingham, A. Bej

Hoover initially went to the CRREL tunnel in search of "psychrophiles"--organisms that live only at extremely low temperatures. Hoover initially suspected the tiny, frozen samples he collected there, from ice more than 30 millennia old, were diatoms, or microscopic, golden-brown algae. But closer study at the nearby University of Alaska revealed not diatoms but something much more interesting--an assortment of bacterial cells, many of which came to life as soon as the ice thawed.

Back home at the National Space Science and Technology Center in Huntsville--the scientific research consortium operated by NASA and Alabama universities--Hoover and his collaborator, microbiologist Dr. Elena Pikuta of the University of Alabama in Huntsville, discovered the ice samples contained anaerobic bacteria that grew on sugars and proteins in total absence of oxygen. They had frozen near the end of the Pleistocene Age, which extended from about 1.8 million years ago to just 11,000 years ago--and earned the new bacterium its name.

"It is thrilling to see real, living organisms that existed in an ancient ecosystem," Pikuta said. "It's just bacteria--but bacteria from a period when mammoths roamed the Earth."

Further testing revealed the organism was not a psychrophile at all, but a "psychrotolerant"--not an organism that thrives only at very cold temperatures, but one capable of enduring deep cold that resumes normal activity when temperatures rise.

Hoover, Pikuta and their colleagues--Damien Marsic of the University of Alabama in Huntsville, Professor Asim Bej of the University of Alabama at Birmingham and Dr. Jane Tang and Dr. Paul Krader of the American Type Culture Collection in Manassas, Va.--spent four years determining whether the find in Alaska was indeed a legitimate new species. Pikuta isolated and cultured the CRREL tunnel strain, recording the bacterial growth rate, high- and low-temperature tolerances, pH and salinity range, antibiotic sensitivity and other required characteristics, and comparing the results with known species most closely related to this new strain. Marsic next conducted gene sequencing studies, determining how the bacterium fit into the phylogenetic tree--the evolutionary history of a species or group of organisms.

The result: proof of a new life form. Their findings were published in the January issue of the International Journal of Systematic and Evolutionary Microbiology. The bimonthly periodical, the official journal of record for new bacterial species, is produced by the Society for General Microbiology.

"Astrobiologists ask, 'Is life strictly terrestrial in origin, or is it a cosmic imperative, an undeniable, universal biological truth?' That possibility is central to our desire to explore the universe," Hoover said.

"The existence of microorganisms in these harsh environments suggests--but does not promise--that we might one day discover similar life forms in the glaciers or permafrost of Mars or in the ice crust and oceans of Jupiter's moon Europa," he added.

Although many people think of bacteria merely as a cause of illness or decay, Hoover and Pikuta are quick to defend the organisms, which they call highly advanced marvels of natural engineering. "Without bacteria, the existence of multicellular organisms is, in principle, impossible," Pikuta said.

There are approximately 7,000 validly described species of bacteria, though far more are surmised to exist in nature. The vast majority of bacteria are harmless to humans. Only a very few--less than 1 percent of all known species--are dangerous. And many, Hoover noted, are valuable to human life, aiding us in numerous ways: culturing wine, dairy products and other foods; assisting in the biological extraction of gold and other precious metals from ore wastes; and aiding in the production of valuable proteins and life-saving drugs.

Carnobacterium pleistocenium could even offer new breakthroughs in medicine, Hoover said. "The enzymes and proteins it possesses, which give it the ability to spring to life after such long periods of dormancy, might hold the key to long-term cryogenic--or very low temperature--storage of living cells, tissues and perhaps even complex life forms," he said.

Living cultures of the new bacterium have been deposited in the American Type Culture Collection, in the Microbial Collection at the Pasteur Institute in Paris, and in the Japan Collection of Microorganisms in Saitama, Japan.

Hoover and his team previously discovered Spirochaeta Americana, a new bacterium thriving in the salty, oxygen-free, alkaline mud of Mono Lake, a volcanic basin in California.

And they're not done hunting evidence of life in Earth's most inhospitable reaches, he says.

"Life is far more diverse, and far more resistant to conditions we consider hostile, than was thought possible only a decade or two ago," Hoover said. "Studying these organisms helps us understand that life may be far more widespread in the cosmos than we previously imagined."

For more information on the Internet about NASA's astrobiology research, visit:

For more information about the National Space Science and Technology Center, visit: