Microscopic Astronauts
It's unavoidable: Humans can't go to space without taking trillions of microbes with them. An experiment onboard the ISS aims to find out how bugs behave in orbit.

There are trillions of microbes orbiting Earth onboard the International Space Station (ISS). And that's just in the gut of one astronaut.

Astronauts, like everyone else, carry microbes with them wherever they go. There are 1014 in the colon, trillions more on your hands, and in your mouth. The math is simple: Microbes outnumber people, in space and on Earth, by a staggering factor. 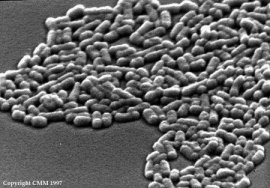 In fact, says Cheryl Nickerson of Tulane University Health Sciences Center, "there are more bacterial cells in your body than human cells."

Many are beneficial. Some of the bacteria in our stomachs, for instance, produce vitamin K needed for the proper clotting of blood. Others help digest food. Even pathogens, in moderation, lend a hand by stimulating the immune system. In short: people need bugs.

Right: Some of these are living in your intestines: E Coli. bacteria. Electron microscope image credit: Centre for Microscopy and Microanalysis, The University of Queensland, Australia.

There's already some evidence that microorganisms behave oddly in a weightless environment. In her laboratory at Tulane, Nickerson has floated some Salmonella bacteria in a rotating wall bioreactor--a device designed by NASA that simulates low gravity. The bioreactor is a fluid-filled habitat for bacteria. Shaped like a cylinder, it slowly rotates, gently tumbling microbes inside. Bacteria in the bioreactor never hit bottom, they hang suspended in their liquid growth medium, much as they would in Earth orbit. "It isn't real microgravity," notes Nickerson, "but it does approximate some aspects of weightlessness."

In the bioreactor, Salmonella changes. The 2nd-leading cause of gastric distress in the USA gets even worse than usual. Its ability to cause disease is increased, says Nickerson. Pseudo-weightlessness makes the Salmonella more resistant to stomach acids and to heat. The bacteria also do a better job eluding macrophages, which are disease-fighting cells in your immune system.

Scary. But the news isn't all bad. Some bacteria can produce helpful antibiotics, and they seem to produce more in space than on Earth--as much as 200% more according to mid-1990 space shuttle experiments sponsored by pharmaceutical company Bristol-Meyers Squib and partner BioServ Space Technologies.

Left: A test tube full of bacterial colonies grown onboard the space shuttle (0-g) alongside a matched ground control (1-g). Production of the antibiotic Monorden was 200% greater in the 0-g test tube. [More]

"These changes are a result of altered genetic expression," says Nickerson. Somehow weightlessness signals the genes of these microbes, commanding them to do things differently. In Salmonella, for instance, 163 genes (out of about 4600 total) changed their levels of expression--becoming more or less active than usual--inside the bioreactor. "The affected genes covered the full range of cell function: metabolism, structure, movement, virulence factors. You name it."

Researchers are only beginning to understand these sweeping changes. Are some microbes more sensitive to space travel than others? Which genes are most altered? And how does this affect people?

An experiment on the ISS, called "Yeast GAP," aims to find out. Nickerson is the principle investigator (PI) for the experiment. She works closely on the project with her Co-PI, Tim Hammond of Tulane University Health Sciences Center and the Veterans Affairs Medical Center in New Orleans. 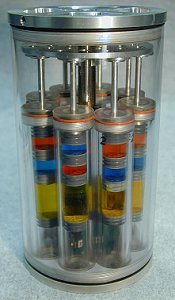 "Last month, we sent 16 vials of brewer's yeast to the space station onboard a Russian Progress supply rocket," says Hammond. In orbit, space station science officer Mike Foale gave the yeast some nutrient soup, and they began to reproduce. The population of cells grew ten-fold in only 30 minutes--"that's about five generations of yeast," notes Hammond. Then Foale flooded the growth chamber with a fixative agent, to stop the population explosion and preserve the cells for analysis back on Earth.

Nickerson and Hammond "can't wait to get the yeast back" to their labs in Louisiana, because, they believe, the cells are going to teach them a lot about genetic activity in space. "These are no ordinary yeast cells," notes Nickerson. "They've been genetically engineered" to reveal their secrets.

Hammond explains: "Yeast cells have 6312 distinct genes, so scientists have created 6312 different varieties of yeast. Each variety has one gene 'knocked out' and replaced with a barcode pattern of nucleotides." These barcodes are like dog tags; by reading them, researchers can tell which gene has been knocked out of a particular yeast cell.

All 6312 types were sent to the ISS, and all 6312 have had their opportunity to grow there.

Which varieties grew best? Which ones fared poorly? Nickerson and Hammond will find out when the samples are returned to Earth (on some future shuttle flight). Using DNA microarray analysis, they will sort the yeast cells by barcode and count them, and compare the results to identical samples grown on Earth. This simple procedure will reveal genetic activity and pinpoint the genes yeast needed most to thrive in orbit. 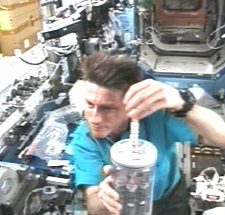 Yeast is a good organism for this research for many reasons. Its genome has been completely mapped. It's tough enough to withstand a trip to space. And although the Yeast GAP strain is benign, some of its genes are similar to those found in infectious microbes, so it serves as a model for virulent bugs that might become more virulent in orbit. "Yeast even has some genes in common with people," adds Nickerson. "So it can teach us lessons about human responses to spaceflight, too."

Here on Earth, yeast is perhaps the oldest domesticated organism, used for millennia to bake breads and brew beer. In space, astronauts are going to want to do those things, too, eventually. Knowing how yeast reacts to weightlessness has practical value beyond genetics research.

Eating. Breathing. Cooking. Sleeping. We do none of these things alone. Trillions of microbes do them with us. And if we settle space, they're coming, too, so we'd better find out how they like it.