Mossy Space Spirals
Samples of fire moss that travel onboard the space shuttle do something odd: they spiral. Scientists say it's a clue to the fundamental inner workings of plant cells. 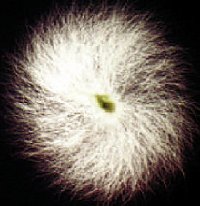 Biologist Fred Sack carefully lifted a petri dish from the tray. Inside were precious samples of moss just back from a two-week voyage aboard space shuttle Columbia. He glanced at the growing clumps, blinked, then looked closer.

"It was not what I expected to see," recalls Sack. His moss was growing in a spiral.

On Earth, moss spores that take root send out hundreds of tiny filaments known as protonemata. These filaments normally grow in an unruly fashion; they make a messy-looking tangle. But the moss onboard Columbia did something different. As if choreographed, the protonemata swirled together in the same direction. They formed a distinctive clockwise spiral like no moss on Earth.

"It's the kind of thing," says Sack, "where the shuttle lands, they deliver your tray, you carefully take the dishes out of the hardware and you're ready to start doing some photography. Then all of a sudden you just look at the cultures, and WOW! You know right away it was not random growth."

That was four years ago. Sack, who is a professor at Ohio State University (OSU), has studied the spirals ever since, yet they remain a mystery.

What was moss doing onboard the space shuttle? Sack and colleagues from NASA had sent samples of Ceratodon purpureus--better known as fire moss--into space to study the way plants sense gravity. Moss is good for such studies, explains Sack, because it contains single cells that are gravitropic--that is, cells that sense gravity and then grow either toward it or away from it. (Moss cells respond to light, too, but the space-spirals formed in darkness. "Phototropism" was not a factor.) Furthermore, moss is small; it doesn't take up much room on the shuttle. 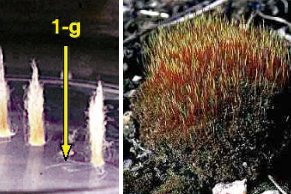 Typically, when a gravitropic plant is sent into space, it gets confused; it grows in a disoriented way. These odd spirals, Sack says, mark the first time in space that a plant normally oriented by gravity has grown in a non-random pattern.

No one knows exactly how plants sense gravity. One possibility, explains Sack, is amyloplasts: tiny starch-filled particles that float within the cell. Because these particles are heavy, gravity pulls them down. In some cells, like root cells, the amyloplasts sink to the bottom, forming a kind of sediment. In the threadlike protonemata that Sack studies, this sedimentation is more complex. It tends to form not one layer of sediment, but many.

Image above: On Earth, moss grows away from gravity and toward light. The left frame shows moss in a petri dish; the right frame shows fire moss growing wild in a field.

In space, the pattern of sedimentation is different than it is on the ground--an important clue, says Sack. Actually, sedimentation shouldn't occur in space at all, he added. In a zero-g environment, the amyloplasts ought to float around at random. Instead, they bunch together. Why? It's part of the mystery.

When the normal pull of gravity vanishes, continues Sack, the position of these starch particles is determined solely by structures inside the cell itself. An example would be the cytoskeleton, a network of thin fibers that permeate some cells. The fibers, made of proteins, give cells shape and hold the nucleus and other organelles in place.

Perhaps the cytoskeleton also causes amyloplasts to cluster together. It's an idea Sack will test later this year when fire moss returns to space onboard the shuttle Columbia (STS-107). Moss cells inside a device called the Biological Research in Canisters experiment ("BRIC" for short) will be fed chemicals that break down cytoskeletons. Will amyloplasts still form bunches? Or float at random? "We'll see," says Sack with anticipation.

Even after researchers figure out why amyloplasts congregate in low gravity, they'll still have more questions to answer. For example, what is the exact mechanism that causes protonemata to spiral?

So far, Sack cautions, researchers can only speculate. Perhaps calcium ions, which flow in and out of the cell, control the direction in which the tip of the cell grows. The unique clustering of starch particles in low gravity might affect the movement of these ions, which in turn might instruct moss filaments to curve in a clockwise direction.

The upcoming STS-107 research mission will provide lots of new data. Where the first experiment (STS-87) involved only three moss cultures, this one will involve 46 petri dishes, some of which will contain multiple cultures. "By the time Columbia lands," predicts Sack, "there will be many thousands of moss filaments grown on the shuttle for us to study."

Sack and his colleagues hope to learn more about the way gravity affects the structure of the cell. Very often, says Sack, in biology you look at a very specialized system -- like fire moss -- and you find some phenomena that turns out to be important for all cells.

Gravity has been a powerful force shaping life on our planet, notes Sack. It's so pervasive, he says, that people don't even recognize its influence. But one trip to space can open your eyes; just take a look at the mysterious spirals of fire moss.