A NASA-supported researcher is learning how to snag strands of DNA and examine them one by one under a microscope.

In a pot of boiling water, spaghetti's a tangled mess. But let's say you want to look at a piece more closely. Simple. Just hook a strand around the handle of a wooden spoon and it straightens out quite nicely. You can examine it easily.

NASA-supported bioengineer Susan Muller of UC Berkeley wants to do the same thing to DNA.

When researchers get a sample of DNA for analysis it's often a tangled mess of coiled strands--just like that pot of spaghetti. They analyze it by chopping the strands into pieces, cloning the fragments, sequencing the pieces, sorting them according to size and, finally, fitting them back together again. In short, it's a complex and time-consuming process.

Muller and colleague Eric Shaqfeh are working on a more straightforward procedure--a way to stretch out a single strand of DNA for examination by a standard laboratory microscope.

Why does NASA care? Because astronauts have DNA.

"We know that cells on Earth have not evolved to be competent in repairing such damage," he says. New DNA analysis tools are needed "to study the problem and develop remedies."

To snag DNA for study, Muller uses a carefully devised fluid flow in a device just a few millimeters long. A flow device, with its tiny linked pools and channels, can be simple or maze-like in design. One that's shaped like a cross, for instance, with fluid flowing in through two arms and out through the opposite two, is very effective at stretching DNA. Muller's device is a bit more complicated than this; it not only stretches the DNA but also allows her to tag the DNA with fluorescent markers and to photograph the glowing strands.

Below: (A) a micro flow device designed by A. Deshmukh and co-workers. The central element is free floating and can be moved by the fluid. (B) glowing streaks trace fluid pathways through the device. "The flow was seeded with fluorescent microspheres," explains Muller. "Long-exposure photographs of the spheres were taken to reveal the details of the flow."

The DNA she's working with is from a virus that infects bacteria. "It's a very popular DNA with bioengineers," she says. "It has about 48 thousand base pairs (or 48,000 rungs in the DNA ladder). Under quiescent conditions, if it's just floating in solution, it has a size of about .7 microns. But it you were to stretch it out completely, it would be about 22 microns in length"--about 10 times longer than a typical bacterium.

To stretch and hold the fragile strands, a carefully spaced array of posts interrupts the flow. "If you have a forest of posts in the flow--a little set of obstacles--then the DNA loops around them, and gets stuck and stretched as it tries to unwind from the posts," she explains.

Below: Images of individual DNA molecules flowing through the micro flow device at positions denoted by letters A through G. "The DNA is stretched and rotated by the flow. DNA stretching is greatest in regions of high flow acceleration," says Muller. 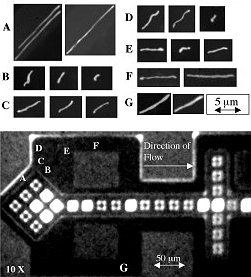 Images of individual DNA molecules flowing through the micro flow device at positions denoted by letters A through G. "The DNA is stretched and rotated by the flow. DNA stretching is greatest in regions of high flow acceleration," says Muller.

Protecting astronauts from deep-space radiation is a still-unsolved problem, and one that must be successfully tackled before deep space can be safely explored. Most approaches to the problem rely on shielding, and on limiting astronaut exposure.

Muller's work suggests the possibility of finding astronauts who themselves are more resistant. Just as some versions of genes are more prone to the mutations that lead to problems like breast cancer, others may be more easily damaged by the intense radiation of deep space. "You might use this device to seek out individuals who are not at high risk for these particular types of mutations," she speculates. "You'd be looking for particular genes, or for particular sequences within a gene, that were correlated with 'radiation toughness.'"

Because her method is so straightforward, it might lend itself to a future technology: portable DNA analyzers. Astronauts on long space voyages could take one along and test their own genes for radiation damage. At the first sign of trouble they could take precautions: avoiding spacewalks or spending the rest of the journey in heavily-shielded parts of the ship.

DNA "biosentinels," as Muller calls them, would benefit more people than just astronauts. The devices could be used to examine anyone's genes for, say, the tendency to develop a certain illness or to react in a particular way to a medication. Medical researchers, criminologists, pharmaceutical manufacturers: they would all like to have one.

That's in the future, though. Meanwhile, says Muller, "there's a lot of basic fundamental science that going to come out of understanding how to use flow to manipulate large molecules. There are still many challenges to making this work and a lot of interesting questions I think we're going to answer along the way."