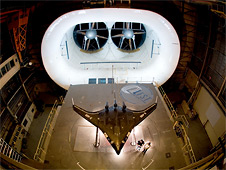 Engineers have installed a small-scale blended wing body prototype in an historic wind tunnel that once hosted some of America's greatest aviation pioneers, including Orville Wright, Howard Hughes and Charles Lindbergh. Designated the X-48B by the U.S. Air Force, the prototype was developed by Boeing Phantom Works. It is being tested in the Full-Scale Tunnel at NASA's Langley Research Center in Hampton, Va. Credit: Boeing/Bob Ferguson

It looks like a huge bird perched atop three utility poles inside a massive NASA wind tunnel -- a 21-foot-wingspan prototype of what may be the shape of some airplanes to come.

The airplane is the X-48B, an advanced concept, fuel-efficient blended wing body or BWB. It's called a blended wing body because it looks more like a modified triangular-shaped wing than the traditional aircraft, which is a tube and wing with a tail.

The eight-and-a-half percent scale prototype is being tested in the Langley Full-Scale Tunnel at NASA's Langley Research Center in Hampton, Va.

Boeing Phantom Works' advanced research and development unit has partnered with NASA and the U.S. Air Force Research Laboratory (AFRL) at Wright Patterson Air Force Base, Ohio, to explore and confirm the structural, aerodynamic and operational advantages of the blended wing body design.

"The biggest difference between this aircraft and the traditional tube and wing aircraft is that this does not have a tail," said Dan Vicroy, senior research engineer at NASA Langley. "The whole reason you have a tail is for stability and control. So what we want to do with this wind tunnel test is to look at how different multiple control surfaces can be used to control this particular vehicle."

The team has produced two high-tech prototypes of the BWB, built to Boeing specifications by Cranfield Aerospace in England, for wind tunnel and flight-testing. The Air Force has designated the vehicles as the "X-48B" based on its interest in the design's potential as a multi-role, long-range, high-capacity military aircraft. 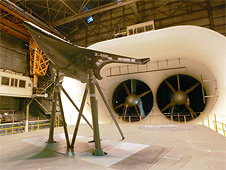 Researchers are testing a 21-foot (6.4 m) wingspan prototype of the X-48B, a blended wing body aircraft, in the Langley Full-Scale Tunnel. Boeing Phantom Works partnered with NASA and the Air Force Research Laboratory to study the structural, aerodynamic and operational advantages of the advanced aircraft concept for potential as a multi-role, long-range, high-capacity military aircraft. Credit: NASA/Jeff Caplan

X-48B Ship No. 1 is the wind tunnel test model. After testing is finished it will be shipped to NASA's Dryden Flight Research Center at Edwards Air Force Base, Calif., to act as a backup for a second X-48B prototype. Ship No. 2 is scheduled to be used in remotely-piloted flight testing later this year at Dryden.

"The X-48B prototypes have been dynamically scaled to represent a much larger aircraft and are being used to demonstrate that a BWB is as controllable and safe during takeoff, approach and landing as a conventional military transport airplane," said Norm Princen, chief engineer for the X-48B program at Boeing Phantom Works.

One advantage Boeing engineers say the concept has over conventional aircract is that it's about 30 percent more fuel efficient than an airplane of similar size that carries the same payload.

"We believe the BWB concept has the potential to cost effectively fill many roles required by the Air Force, such as tanking, weapons carriage, and command and control," said Captain Scott Bjorge, AFRL’s X-48B program manager.

Industry says a blended wing body military aircraft could be in service within 10 to 15 years, if testing and program funding go well.