Tuskegee Airman Reunites With 'Best Plane in the World'

When he was 24, Tuskegee Airman Howard Baugh didn't care about what went into designing and building his beloved North American P-51 Mustang. What he cared about was, "Will this plane get me up, let me do my job, and get me home safely?" 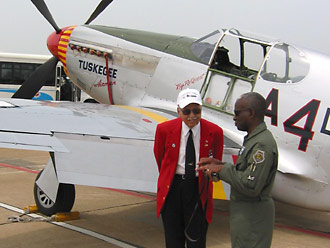 Today, the 84-year-old Baugh stands on the wing of a red-tailed P-51C Mustang on the flight line at Langley Air Force Base in Hampton, Va., and peers into an "office" much like the one he had for 134 combat missions in WWII. He talks to the ground crew and some Air Force fighter pilots and recounts what it was like to fly high-altitude, long-range bomber support missions.

The sight of an old photograph of a P-51 in a National Advisory Committee on Aeronautics (NACA) wind tunnel prompted Baugh to say, "It's nice to think that right where we are today played a big part in designing what I consider to be the best airplane in the world."

In the 1940s, a series of new NACA wing shapes - or airfoils - helped make many American planes fly faster and farther; giving them advantages that helped sway the outcome of World War II. The NACA tested the P-51 in its full-scale wind tunnel to extract the best performance from the new fighter design. When the National Aeronautics and Space Administration (NASA) was formed in 1958, the NACA Langley Memorial Aeronautical Laboratory became NASA Langley Research Center. 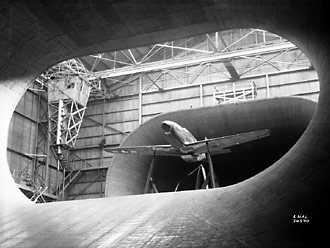 Baugh had been flying a P-40 Warhawk when the new Mustangs arrived. Though the cockpits were essentially the same, he knew the P-51 was a different kind of bird when he strapped in for the first time in Italy in the summer of 1944.

"The P-40 was a good plane. But the first thing I noticed about the P-51 was its huge 4-blade propeller. Of course, we had to steer our planes down the runway using the tail wheel. The plane always wanted to jump into the sky and it was hard to keep the tail wheel down. If the tail of the plane came up too early, you could lose control and the plane would run off the runway. The training we got on the Mustang was "'just get in and go.'"

And once it was in the air, the P-51 accelerated like nothing Baugh had flown.

"It had a lot more power than the P-40. It could climb faster and had much more torque," he remembers. "There was nothing difficult about flying it other than you had to "fly" it all the time. It really kept you on your toes. But its performance was great."

"We liked to fly as high as we could because the flak couldn't get you. Most of our missions were flown at twenty-five to thirty-five thousand feet. Somehow, some of the flak still managed to find us. I had my plane as high as thirty-eight thousand feet. It still flew just great."

The Mustang was a highly effective long-range escort support for heavy strategic bombers and outclassed most enemy fighters in aerial combat.

The Tuskegee Airmen were the first African-Americans to be trained as WWII military pilots in the U.S. Army Air Corps. One thousand Airmen were trained at Tuskegee, Ala., and 445 entered combat. They painted the tails of their aircraft red for easy identification, thus earning the nickname "Red Tails."

Flying over 15,000 sorties, they destroyed more than 490 enemy aircraft and 45 trains. They never lost a bomber to enemy fighters - a record no other fighter group achieved.