Imagine seeing clear skies all the time. It's not some weather fantasyland, but a revolutionary cockpit display technology being developed by NASA to make flying safer. 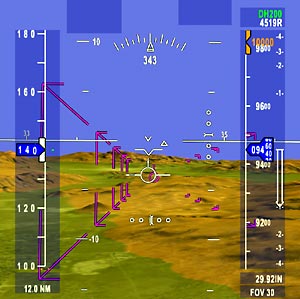 Seventeen pilots from government, the aerospace industry and major airlines flew the GV over 67 hours in 22 flights to collect data. They negotiated in and out of the Reno/Tahoe International Airport and NASA's Wallops Flight Facility using the Synthetic Vision System. A Gulfstream pilot was also in the cockpit as pilot-in-command.

Synthetic Vision gives a pilot a clear electronic 3-dimensional perspective of what's outside, no matter what the weather or time of day. It combines Global Positioning System satellite signals with an on-board photo-realistic database to paint a picture of terrain for the crew.

In this flight test, NASA evaluated an integrated version of the technology. It included a birds' eye view of topography, a voice-recognition system, advanced sensors and equipment that insures accuracy by using sensors to compare the real world to the pictures being generated. Added to this was a Runway Incursion Prevention System, which includes an airport moving map and software that predicts possible encroaching runway traffic and alerts the crew. 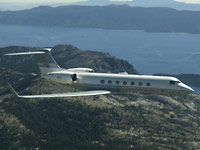 "NASA has already tested the individual technologies of Synthetic Vision and Runway Incursion Prevention Systems on board a NASA 757 aircraft," said Randy Bailey, Synthetic Vision principle investigator. " We were particularly excited to be partnered with Gulfstream which has been an industry innovator in aviation technology."

During the flight evaluations, the test subject pilots flew at night or with the windshield intentionally covered, simulating low visibility conditions, so the pilot would have to rely on the computer-generated information on the displays. Those displays include head-down displays mounted into the plane's instrument panel as well as a head-up display that superimposes terrain and guidance information onto a screen located right in front of the pilot's eyes.

A number of airline pilots have already flown components of the Synthetic Vision System in simulators and a NASA 757 research jet. "I think it's awesome." said United Airlines 767 Captain Rick Shay of the technology. "To explain the difference in the situational awareness that you gain, it's just a complete leap from the technology that's there today." 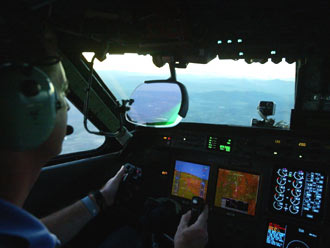 NASA will use the results of the flight test to advance Synthetic Vision Systems research, which is part of the NASA Aviation Safety and Security Program's efforts to develop technology to help reduce the fatal aircraft accident rate. Synthetic Vision Systems could help eliminate the world's deadliest aviation accidents, called Controlled Flight into Terrain (CFIT). A CFIT accident is where a normally functioning aircraft slams into the ground, water or an obstacle, either because the pilot wasn't aware the plane was headed in the wrong direction, bad weather or a combination of factors.

For more on the NASA Aviation Safety and Security Program please check the Internet at: