Bill Dana - Rocket Pilot
Checklist pages floated mid-air, suspended as if by magic. NASA X-15 test pilot William H. "Bill" Dana looked past them, focusing on the instrument panel to keep the rocket plane on track as it crested at an altitude of 59 miles before re-entry began.

A magnificent view of the earth emerged, spreading out before Dana as he pushed the rocket plane's nose down.

"The horizon appeared as a ring of bright blue around the shell of the earth, with darkness above," Dana remembers. "I knew I'd gotten all the altitude I needed to qualify as a space adventurer!" 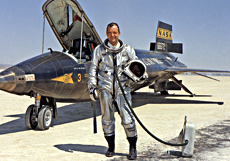 However, like seeing a grand view from one's car while driving a precarious cliff-side mountain road, this was no time for sightseeing. The black stallion required a pilot's full attention.

This flight, along with many others, characterized the adventurous life Bill Dana lived as a NASA pilot.

Dana is a well-known, respected and much-loved figure at NASA's Dryden Flight Research Center and in the aerospace community. He served as a research test pilot and later chief engineer at Dryden from 1958 until 1998, when he retired after almost 40 years of distinguished service to NASA. He has continued working as a contractor at NASA Dryden, supporting the center's history office on various projects and publications.

The start date for Dana's storied NASA career is easy to remember: he began work at NASA the same day the agency began, Oct. 1,1958. As a NASA research pilot, working with the likes of fellow X-15 pilot Neil Armstrong, Dana was involved in some of the most significant aeronautical programs carried out at Dryden. 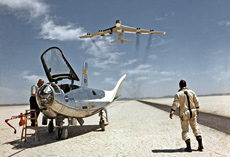 Image right: Moments after landing the HL-10 lifting body on the dry lake bed at Edwards Air Force Base in 1969, NASA research pilot Bill Dana watches the NB-52B mothership that launched his flight only minutes before soar over in a low-level salute. NASA photo

Dana was a project pilot on the hypersonic X-15 research aircraft and flew the rocket-powered vehicle 16 times, reaching a top speed of 3,897 mph and a peak altitude of 307,000 feet, nearly 59 miles high. He piloted the 199th and final flight of the 10-year long program as well.

In the late 1960s and 1970s, Dana was a project pilot on the manned lifting body program, which flew several versions of the wingless vehicles and produced data that helped in development of the space shuttles.

Before his assignment as chief engineer, Dana served as assistant chief of the Flight Operations Division, commonly known at the center as chief pilot. He was also a project pilot on the F-15 Highly Integrated Digital Electronic Control research project, and a co-project pilot on the F-18 High Angle of Attack Research Vehicle project. Dana flew the Advanced Fighter Technology Integration F-16 aircraft as well as many others. 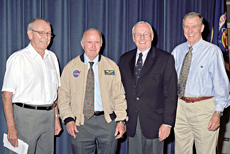 Dana received the NASA Exceptional Service Medal and the Haley Space Flight Award from the American Institute of Aeronautics and Astronautics for his contributions to the lifting body program. For his service as a flight research pilot, he received NASA's Distinguished Service Medal in 1997. In 2000 he was awarded the Milton O. Thompson Lifetime Achievement Award by NASA Dryden.

As a capstone to his illustrious flying career, Dana was finally recognized as an astronaut in August 2005, nearly 40 years after his pioneering flights more than 50 miles above the earth.