NASA's Hispanic Heritage:
Despite Personal Tragedies, NASA Engineer Pursued Her Dreams
NASA engineer Gina Branco was only 12 when her mother was killed in an automobile accident, followed by her father's death three years later. These tragedies did not discourage Branco from pursuing a childhood dream of attending college. 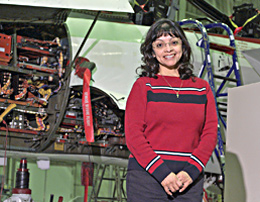 The youngest of eight children, Branco then moved from her home in Cuernavaca, Mexico, to the San Francisco Bay Area home of her older sister. As a new immigrant to the United States, she completed high school requirements while she learned to speak English. Branco displayed an aptitude and love of math that surprised her teacher, who encouraged Branco to continue to strive for mastery in mathematics.

After high school, Gina held a full-time accounting position while attending evening courses at San Francisco State University as a mathematics major, which she later changed to engineering.

After transferring to the University of Southern California in Los Angeles on a full scholarship, she studied biomedical and electrical engineering. Branco hoped to use her education to design prostheses for handicapped individuals. Finding the quest for dual degrees too challenging, she completed a Bachelor of Science degree in electrical engineering seven years after beginning college.

Branco applied for an engineering position at NASA's Dryden Flight Research Center, located on Edwards Air Force Base in California. She left her job interview with the impression that employees at the center enjoyed their work and that things really happened at Dryden. She thought the small NASA center offered a family atmosphere that promotes teamwork.

Over the years, Branco has contributed to many successful flight research projects involving modified aircraft, such as the F-104, F-16XL, F-18 High-Alpha Research Vehicle and the Intelligent Flight Control System project on a highly modified NF-15B. She is currently a member of the developmental flight instrumentation team responsible for designing and implementing this subsystem to support the upcoming Launch Abort System testing for the Orion Crew Exploration Vehicle.

Branco's advice to young Hispanics is that resources and opportunities are available, if they are determined in their goals and prepared to work hard. It is not always easy, but the journey is rewarding. NASA hires individuals like Branco who are hard working, eager to learn and willing to contribute to any project.

After 21 years at NASA Dryden, Branco enthusiastically says, "No two days have ever been the same."