California Students Join Small Circle of Revolutionary Fuel-Cell Fliers
A fuel cell-powered remotely piloted aircraft buzzed quietly into the morning sky in a park near Van Nuys, Calif., August 25. The unorthodox flight was a triumph of collegiate innovation made possible by a nurturing program at California State University Los Angeles and a boost from NASA's Academic Investments Office and the Air Force Office of Scientific Research.

The college figures this is only the fourth public flight of a fuel cell-powered aircraft anywhere, and the first to use an improved type of fuel cell that greatly increases the power-to-weight ratio available for the aircraft. Fuel cells produce electrical energy in a conversion process that uses hydrogen and yields only water as a byproduct. 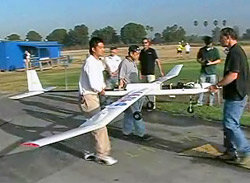 Low ground fog had just cleared the area as retirees who brought their more traditional radio-controlled aircraft paused to watch the earnest college students assembling their project plane, with its 18-foot wingspan. Using what is familiar to them, the students placed a pressure tank usually used to propel paintballs in mock combat games in the nose of their aircraft to serve as the hydrogen reservoir.

Curved sheets of honeycomb Kevlar, covered with composite materials, enclosed the hydrogen tank and the critical fuel cell in a simple pod that culminated in a plastic propeller at one end with a skinny tube extending from the other end to support a traditional aircraft tail assembly.

Like their counterparts in the aeronautical industry, the students tested their electric airplane earlier on battery power before attempting the fuel cell flight. From the early hops, they learned how their home-grown design would perform. Student team leader Christopher Herwerth expressed some concerns over the amount of wing flexing he saw on earlier flights, and wondered whether he should have designed it beefier. Herwerth faced the aeronautical engineer's timeless battle between strength and weight as his team created the aircraft. 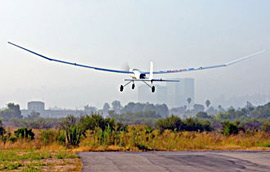 Students flew the machine on its earlier battery sorties as long-time radio-control pilot Jay Replogle watched. Replogle, retired as the owner of a hobby shop, later admitted, "I really wished they would ask me to fly it," while not wanting to butt in on the students. After Replogle chatted with the group's faculty advisor, professor Maj Dean Mirmirani, the professor quickly concluded Jay was the right pilot for the all-crucial fuel cell test flight.

Following ground checks of an improved radio-control system suggested by Replogle, the students gingerly carried their flexing aircraft to the end of the paved runway in an impromptu parade given tempo by the excitement of what they were about to attempt. With the fuel cell primed and activated, the aircraft's electric motor spun the propeller with a soft, reedy twittering as Replogle let it build up flying speed on the runway before conservatively moving the elevators up to coax it into the sky.

Taking the 28-pound weight of the aircraft, the wings flexed upward at their tips, imparting a birdlike grace to the flight as Replogle flew a gentle pattern with an extra 360-degree turn before settling in to land. The point had been made: this student group, using a new kind of cell, had joined the rarefied ranks of successful fuel cell aircraft designers. Professor Mirmirani said this historic aircraft will probably never fly again; it has attained its test goal. "I'd hate to crash this airplane," he said, adding that it will probably be placed on display in the area.

This project explored the world of fuel cell flight and gave a group of students fantastic hands-on experience with the creation of a test aircraft and a program intended to meet a specific goal.