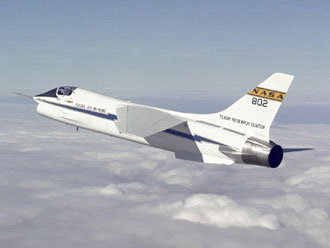 When the Wright Brothers gave the world flight, they used a combination of body movements to deflect portions of their Flyer, causing it to move in the direction desired.

Sixty-nine years later in 1972, NASA gave the world the next big thing in flight controls when the agency’s Dryden Flight Research Center showed how to use computers to make high-speed flight control decisions.

Called digital fly-by-wire (DFBW), the computerized system is used today on everything from jet airliners to cutting-edge fighters and stealth bombers. A team of computers instantly analyzes control inputs made by a pilot, evaluating the aircraft's speed, weight, atmospheric conditions, and other variables, arriving at the optimum control deflections to achieve what the pilot has requested. For the pilot, traditional flight controls in the cockpit make the task seem the same for a DFBW-equipped aircraft as for a manual or hydraulically boosted aircraft, although having computers tell the aircraft how much control deflection is necessary means the pilot is not actually physically moving the control surfaces.

Using multiple computers does two key things for flight safety: it virtually eliminates the possibility of computer failure crippling an aircraft in flight, and it relies on a majority of the computers to instantly "vote" on the right control deflection to command. The computers can make the optimum control deflection choice quicker than a pilot, and can keep an otherwise unstable aircraft flying straight and true. This has allowed designers to create aircraft that are highly maneuverable, since traditional concepts of inherent stability that inhibit maneuverability can be traded for the improved nimbleness of a design that, manually, would be impossible to fly.

Dryden’s DFBW aircraft -- an F-8C Crusader given to NASA by the U.S. Navy -- flew for the first time on May 25, 1972. The program’s chief research pilot, Gary Krier, now Dryden’s director of flight operations, remembers the significance of the work done 31 years ago.

"Everyone on the program knew that what we were doing was going to be a major breakthrough in flight control," said Krier. "We were excited to be assigned to the program and make our mark on aviation by being first in digital controls. The enthusiasm was there every day."

Support for the concept at NASA Headquarters came from Neil Armstrong, himself a former research pilot at Dryden. He served in NASA's Office of Advanced Research and Technology following his historic Apollo 11 lunar landing and knew electronic control systems from his days training in and operating Apollo spacecraft. Armstrong suggested that the Dryden DFBW team adapt an Apollo program digital flight control computer. It wasn't long, however, before the DFBW program developed a digital flight control computer that significantly advanced the state of the art. This was demonstrated by the fact that for the Space Shuttle, designers turned to the DFBW program for a flight computer for the Orbiters. The result was a classic case of in-house technology transfer. The original digital flight control computer development from Apollo proceeded to the DFBW program and then back again into space aboard the Shuttle.

Later, in a joint program carried out with NASA’s Langley Research Center, the original Apollo system was replaced with a triple redundant digital system designed to provide backup computer capabilities if a failure occurred.

In addition, digital flight control systems are more efficient because they are lighter and take up less volume than hydraulic controls aboard aircraft. This serves to either reduce the fuel required to fly with the extra weight, or permits the carrying of more passengers or cargo. Digital flight controls require less maintenance than the systems they replace.