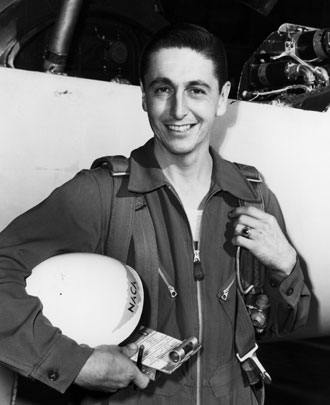 Legendary test pilot Scott Crossfield died when his single-engine plane crashed in Georgia on April 19. He was 84.

Crossfield made aviation history on November 20, 1953, becoming the first person to fly at more than twice the speed of sound, or Mach 2.

Image left: Crossfield with his D-558-II Skyrocket after the record breaking flight in 1953.

"Scott Crossfield was a true pioneer whose daring X-15 flights helped pave the way for the space shuttle," said NASA Administrator Mike Griffin in a statement.

"NASA remembers Scott not only as one of the greatest pilots who ever flew, but as an expert aeronautical engineer, aerodynamicist, and designer who made significant contributions to the design and development of the X-15 research aircraft and to systems test, reliability engineering, and quality assurance for the Apollo command and service modules and Saturn V second stage. Today, those of us in the aeronautics and space communities extend our condolences and deepest sympathies to Scott's family."
+ Read Press Release

"Scott Crossfield was a pioneer and a legend in the world of test flight and space flight," said Mike Coats, director of NASA's Johnson Space Center in Houston. "Much of our technology used in the design of the space shuttle and in the development of the Constellation exploration program is based on the pathfinding work done by Mr. Crossfield in his numerous missions in the X-15. The astronaut corps and all of NASA are deeply saddened by his death, but his legacy will be with us through the centuries."

Born in California in 1921, Crossfield went to the University of Washington and served in the Navy during World War II before joining NASA's predecessor, the National Advisory Committee on Aeronautics -- NACA, in 1950.

He eventually worked for North American Aviation on the revolutionary X-15 rocket plane, guiding it on its first free flight in 1959. In 1993, NASA awarded him the Distinguished Public Service Medal for his contributions to aeronautics and aviation over a period spanning half a century.