NASA and the Army Solve Mysteries in Helicopter Parts From the War in Iraq and Afqhanistan
They begin with very few clues, and then carefully collect evidence that leads to a discovery of what causes failures in Army helicopter parts. It's an investigative probe blending scientific and engineering principles. But NASA engineers are solving this mystery.

Under a NASA Space Act Agreement, the Materials and Processes Laboratory of Marshall Space Flight Center's Engineering Directorate is partnering with the Army Aviation Engineering Directorate, U.S. Army Aviation and Missile Research, Development and Engineering Center at Redstone Arsenal to conduct failure analysis on helicopter parts. The project taps Marshall’s capabilities and expertise in metallurgy -- the science of metals.

The lab is analyzing such items as engine parts, main rotor parts and fasteners from Army helicopters that have flown in the war in Iraq and Afghanistan. The parts under scrutiny are those that have experienced some type of failure with the metal product forms such as castings, forgings or extrusions. 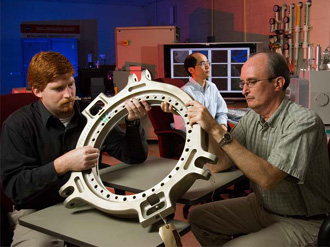 The helicopter hardware is studied on a microscopic level, because most problems in the metal can't be seen with the naked eye. Parts from Apache, Blackhawk, Chinook and Observation helicopters are analyzed in Marshall's state-of-the-art failure and analysis diagnostic facility. The facility uses high-powered microscopes to uncover the root cause of the problem, whether it's the way the part was machined, heat-treated or formed and fitted. The engineers also use fractography to characterize the fracture surfaces of the failed parts.

Analysts take photographs of the part, document it, and then dissect it for more in-depth study. "This is an excellent opportunity for two government agencies in the same location to share resources," said Tim Vaughn, chief of the Metals Engineering Branch at Marshall. "The tests we are conducting in this lab are saving lives," he added. "If we can find things to make the parts perform better, then we are making it safer for these Army helicopter pilots and soldiers being ferried, too."

When the lab receives a part to investigate, analysts strive for a one-month turnaround for results -- often in half the time compared to other facilities that do the same type work.

The team currently is analyzing turbine wheels in OH-58 helicopter engines. Turbine wheels are important moving components that make helicopter engines run and usually experience a great deal of stress. This particular piece of rotating machinery failed during an exercise, and it's up to the NASA experts to determine if the failure stems from fatigue or metal problems, or whether the wheels have simply exceeded their life limit.

"The long-term expertise of identifying materials failures in the Marshall lab is invaluable to the Army," said George Hanna, a contractor support metallurgist for the Army's Aviation Engineering Directorate at Redstone. "We usually send failed parts to the prime contractors, but doing independent analyses here identifies real problems faster, and it's more cost efficient."

Over the past two years, the Marshall team has made dozens of recommendations to the Army that could prevent future failures from occurring between normal maintenance cycles or, at best, extend the maintenance cycles so they can fly more missions per unit time in harsh conditions and climates throughout the world.