A Clear View for Pilots

How to make an airline system that's already safe even safer is a question NASA researchers wrestle with every day.

One solution being developed at NASA is a kind of virtual reality video display for cockpits. 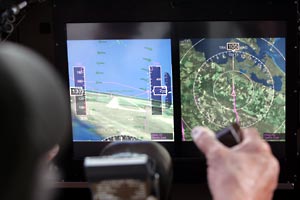 Engineers and their industry partners have designed and tested Synthetic Vision Systems, which combine Global Positioning System (GPS) satellite signals, a computerized photo-realistic terrain atlas and advanced sensors that can "see" through fog. Information is integrated into an easy-to-understand cockpit display that pilots can use to fly the plane safely and easily no matter what the weather or time of day.

In recent flight tests, NASA Langley technicians equipped a former 757 airliner with the sophisticated cockpit displays and radar equipment that can give pilots a clear electronic view of what's outside and guidance information that's a sort of pathway in the sky. Information is shown both on a head-up display screen directly in front of the pilot's eyes and a head-down display just behind the airplane's steering yoke. 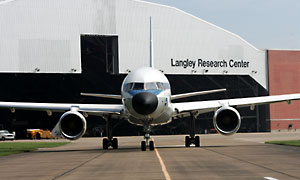 One thing researchers want to determine is whether an enhanced weather radar capability can help pilots spot traffic and obstacles that aren't part of the Synthetic Vision terrain database. NASA tested this version of "enhanced vision" to evaluate if it can effectively fill in the gaps and help pilots "see" items, such as traffic on the runway or even a cellular tower recently added to the landscape.

"We've added new software to the X-band weather radar that's already on many airliners to produce a more detailed picture of what the radar would normally see," said Steve Harrah, SV sensors lead. "This helps verify the accuracy of the Synthetic Vision terrain display and gives the pilot a more complete picture of what's on the ground." 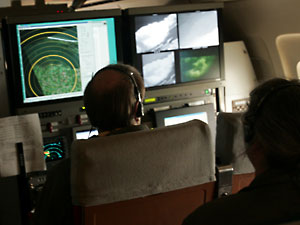 Image to left: NASA researchers enhanced the X-band weather radar to improve details so the radar could be used to confirm the SVS views. Credit: NASA/Jeff Caplan

During the tests pilots from the airlines, the Federal Aviation Administration and aircraft manufacturers flew the 757 on approach to the Wallops Flight Facility in Virginia. On most research scenarios the evaluation pilot's front window was blocked and he had to rely on the synthetic vision and enhanced vision displays. Traffic or obstacles were on the runway, unbeknownst to the test pilot. If the displays worked, the pilot was able to "see" the traffic and avoid it. If not the safety pilot who was also in the cockpit and always had an unobstructed view took over.

"Synthetic Vision would probably allow my 13 year old daughter to fly the approach. The technology is tremendously intuitive and eases the pilot's work load," said Chip King, one of the evaluation pilots who works for Gulfstream.

NASA and industry will take the information learned from the flight tests to refine the cockpit displays in hopes of making them available as soon as feasible to the aviation industry.