Cal Poly Students Help NASA Reduce Aircraft Noise
Thirteen aerospace engineering students from the California Polytechnic State University at San Luis Obispo (Cal Poly) spent a part of their summer on a lake. This is normal for many college students, but this lake was the Roger's Dry Lake located in California's Mojave Desert. 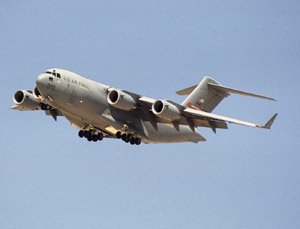 The students were participating in the C-17 flight noise mitigation study, a NASA experiment that may one day make the world a quieter place.

Image to Left: The Air Force Test Center's C-17 flew a variety of landing profiles at Edwards Air Force Base as part of a NASA noise mitigation study.

Currently, a house within an airport's flight path must have triple-pane windows, special doors and extra attic and wall insulation to keep aircraft noise out. Researchers from NASA Ames and Dryden Flight Research Center want to eliminate or at least reduce the need for these often-costly modifications.

To do so, NASA, through the Vehicle System Program, is working to reduce the 'noise footprint' produced by aircraft. A key component of this plan is the development of extreme short-take-off and landing (ESTOL) aircraft and procedures. The ultimate goal is to keep aircraft noise within an airport's property. On Sept. 10, NASA demonstrated that aircraft capable of ESTOL could concentrate aircraft noise to a narrow area.

Seventeen microphones, covering approximately 15 square miles, were positioned on the dry lakebed to record the noise footprint of the United States Air Force Test Center's C-17 Globemaster III as it made various landing approaches. In addition to conventional straight-in approaches, a new type of simultaneous and non-interfering (SNI) approach was flown. This new approach is similar to a descending spiral over the landing site. 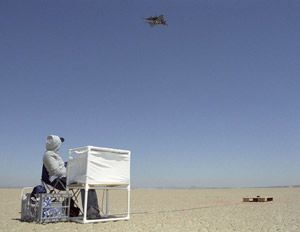 The successful tests were made possible by the extraordinary efforts and ingenuity of the team to meet the challenges of a limited budget and a shortened test schedule, according to Craig Hange, NASA Ames project manager and principle investigator for the C 17 study.

"The team came up with a totally new way of taking noise data over a large area that not only worked well, but was less expensive by using commercially available parts and software," said Hange. "They not only put in their ideas, but a lot of hard work made it a reality."

"The Dryden personnel did more than their share to make sure the C-17 was ready and the flights would happen," said Hange.

"The Cal Poly students and faculty also deserve a lot of credit for taking on this new task, doing most of the grunt work and sharing an enthusiasm that you can only get from students," Hange added.

"Involvement in this NASA research project has taken the students' classroom curriculum and given it a hands-on application," said Cal Poly student lead Erika Berg.

The students also designed and built the portable workstations (made out of inexpensive PVC pipe and heavy fabric) that the computer equipment sat in while being used on the lakebed.

The data collected during the tests will be very valuable for future research supporting ESTOL aircraft and may have a significant impact on airport operations around the country. 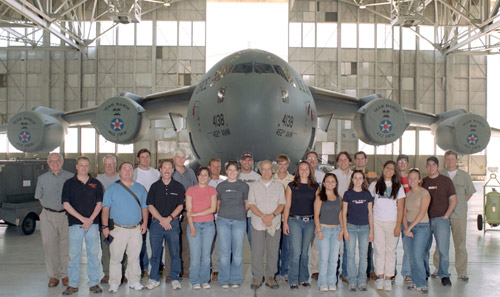 "An aircraft that could use the shorter runways of smaller regional and community airports could bring commercial air travel to approximately 97 percent of the U.S. population because most Americans live within a half-hour of an airport," said Zuk.