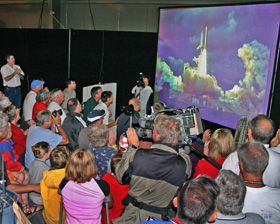 Cheers and applause in the NASA AirVenture exhibit drowned out the sound of massive space shuttle engines as Discovery resumed operations yesterday morning. About 400 visitors and NASA employees watched the launch live. (Photo by Frederick A. Johnsen)

Remarkable live video footage taken from the huge external fuel tank monitored its slow, elegant departure from the shuttle, as cheers again echoed through the NASA building at AirVenture 2005. Many EAA members have been part of the NASA shuttle team over several decades, and at least one space shuttle astronaut has been known to take EAA publications along to read in space.

The crowd in the NASA building at AirVenture showed excitement, expectation, and occasional hand-clasped anxious anticipation as the launch progressed. It all turned to exhilaration as the brilliant plume of the shuttle ascended ever higher.

Television crews captured the excitement and interviewed visitors and NASA employees. The shuttle will be aloft until about August 7. It carries vital supplies and equipment for the International Space Station. This mission also gives astronauts their first opportunity to practice new shuttle tile repair techniques during extra-vehicular activity (EVA) while in orbit.