NACA Reunion Attendees Reminisce
In 1915, the National Advisory Committee for Aeronautics (NACA) was founded to advise the United States government to coordinate aeronautics research, but it quickly became a leading research organization in aeronautics and the new field of astronautics.

Image to Left: The National Advisory Committee for Aeronautics Logo.

When President John F. Kennedy moved the nation into the 'space race' and proposed his bold vision of landing a man on the moon, NACA was the logical organization to form the foundation of a new space agency. On Oct. 1, 1958, NACA formally disbanded and the National Aeronautics and Space Administration was born. 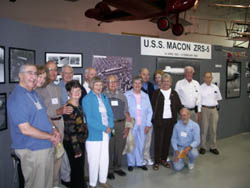 Forty-seven years later, those who worked for the NACA continue to feel passionate about its successes and loyal to its memory. Recently, former employees and their spouses and children gathered for the eleventh NACA reunion to renew acquaintances and to reminisce about the past.

The three-day reunion, held Sept. 30 to Oct. 2, 2005, drew 320 people from 17 states and the District of Columbia. The event was hosted by NASA Ames, with attendees ranging in age from 70 to well beyond 90 and representing all of the former NACA centers. They participated in one or more of the eight group activities including a gala banquet and tours of NASA Ames and the Hiller Aviation Museum.

The 11th reunion held special significance, since 2005 marks the 90th anniversary of the formation of NACA. The great grandniece of Orville and Wilbur Wright, Janette Davis Yoerg, was staying at the same hotel on the night of the buffet dinner and noticed the NACA gathering. She was invited to the dinner and her presence added to the event's importance. 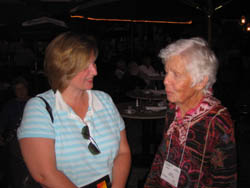 "We at Ames are very proud of our NACA heritage," said Hubbard. He went on to praise the theoretical and experimental genius of the NACA scientists and engineers like Ames' Harvey Allen, who saw blunt bodies as a safe way to re-enter Earth's atmosphere. America's new crew exploration vehicle will use an improved blunt-body capsule, which will accommodate up to six people.

Hubbard said that genius was prevalent throughout NACA. The work of these geniuses led to breakthroughs in aeronautics and carries a legacy of excellence that continues today at NASA.

Hubbard concluded by saying, "You have been the giants on who I, and everyone in NASA, proudly stand." 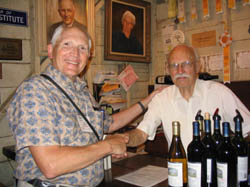 Throughout the reunion, a large poolside hospitality room, open from dawn to dusk, provided a venue for never-ending reminiscing about the good old days.

Image to Right: Dick Kurkowski and George Cooper reminisce about the past.

"There are so many good memories and lots of camaraderie," said Jack Suddreth, a 33-year veteran of NACA and NASA at Lewis Flight Propulsion Laboratory, eventually renamed NASA Glenn Research Center. "Everybody can remember what they did, how things worked together and who did what to whom…"

Suddreth also recalled how open houses at Lewis inspired him as a teenager and how the 'air lab guys' from Lewis mentored him before he joined NACA.

Ralph Hallett, who worked at Ames from 1946 to 1978, said he came to the reunion (with a chuckle) "to shoot the breeze with old guys and to record some of the things I did." Hallett worked on string gauges and helped improve pressure cells used for electrical output during flight experiments. 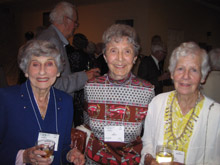 "Of the many people I enjoyed seeing and talking to about the 'good old days', three young ladies stand out in my mind," said Jack Boyd, Ames' historian/ombudsman. "Helen Robinson, who used to arrange trips for Orville Wright to come from Dayton to Washington for NACA committee meetings, Jo Dibella who was the secretary to Hugh Dryden, director of NACA and first NASA deputy administrator, and Edie Watson, secretary to Harvey Allen and Hans Mark. They epitomized the strength and the vitality of NACA."

The NACA reunion was the inspired creation of Dibella, who ended her career serving as the secretary of Hugh Dryden. The first NACA reunion was held in 1976. Since 1982, reunions have been held on a more or less regular basis. The next reunion will be hosted by NASA Langley Research Center and is planned for 2007.