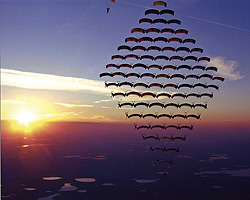 All three men started skydiving in the late 1970s. An advertisement posted outside a Georgia Tech cafeteria first turned Bolton's attention to skydiving, while Hillebrandt took his first jump at the urging of friends. Keenan got into the sport as a distraction while living in Texas. "My girlfriend dumped me and my motorcycle was stolen in the same week...so I was thinking of something to do," commiserated Keenan. "I spent a half-hour in an old trailer with some hippie guy who told me to 'pull this and don't die.' "

After a few years of traditional skydiving, each of the engineers became restless for a way to expand their skills and challenge the skies even more. That's when they started competing in the canopy formation branch of skydiving, in which flyers team up to form geometric shapes in the air.

"If you...said, 'Come on, everybody - let's go do a big canopy formation,' they'd all run away," said Hillebrandt. As daring as the sport sounds, its selling point isn't displaying bravery, but rather demonstrating skill. Keenan declares it's about "an increased level of airmanship."

The three divers teamed up when their careers all brought them to Kennedy Space Center in the mid-1980s. They're quick to thank the camaraderie of each other and the sport's community for keeping them together. "The canopy formation group is really a tight-knit group," said Bolton. "Yes, because when you're tangled up with someone spinning towards the ground at hundreds of miles an hour, you build fast friendships," joked Keenan.

To date, each jumper has successfully landed between 2,000 to 6,000 skydives.

The historic 81- and 85-person jumps were planned by a group called CF World Record 2005. Plotting this year's world-record dives required working out everything from choreographing the placement of people within the formation, to the number and type of airplanes they needed. Jumpers also had to qualify for the world record team by trying out at training camps held around the United States and Europe. 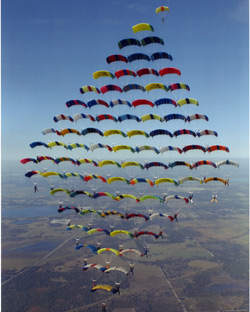 Once the planning was complete, 88 skydivers -- along with event organizers and judges -- descended on Lake Wales in late November for a week of practicing and attempting to break the record. The skydivers even had to take part in practice simulations called "dirt dives," in which they walked through the phases of the dive while on the ground.


Strong winds and rain from nearby Hurricane Wilma hampered activities during the early portion of the week. Eventually, the battering winds subsided on Nov. 25, clearing the way for a sunset attempt at placing 81 people in a high-flying, diamond-shaped formation.

With the sun sinking low on the horizon, the first plane dropped a load of 16 jumpers from an altitude of 24,000 feet. The group of divers quickly organized into a core that the rest of the formation flyers would "dock" to. They secured themselves to each other by wrapping their feet around the lines of the parachutes below them.

Once under way, the formation had to develop quickly as the divers dropped toward the Earth. "The whole formation descends at 1,000 feet per minute," said Keenan.

Two more waves of planes arrived, streaming in divers and swelling the size of the formation. When the 81st person docked, he keyed his radio and shouted into it for each of the jumpers to hear: "Complete!" The "81-way" dive took 9 minutes and 12 seconds to come together, and was held in formation for 26 seconds. The next words heard over the radio were "starburst, starburst" - the command to break up the diamond formation and come in for a landing. "We had heard the complete call -- we knew we had got it -- so we were yelling and hollering and high-fiving and jumping around in the field," said Hillebrandt.

Back at the event's headquarters, Bolton, Hillebrandt and Keenan waited along with the other 78 skydivers to see if the judges agreed the group had accomplished its goal. "They came up on the stage and announced it was a new world record. Then one of the judges popped open a bottle of champagne and started spraying the crowd," said Keenan. "It was like winning the Indy 500."

* On Nov. 26, Bolton, Hillebrandt, Keenan and their team raised the world record with a successful 85-way jump.