The Next Generation Blue Marble 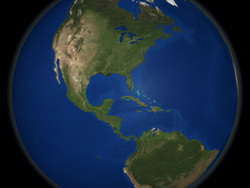 Image left: Using data from the Moderate Resolution Imaging Spectroradiometer (MODIS) aboard NASA’s Terra satellite, scientists and data visualizers stitched together a full year’s worth of monthly observations of the land surface, coastal oceans, sea ice, and clouds into a seamless, photo-like mosaic of every square kilometer (.386 square mile) of our planet. Click on the image to view animation. Credit: NASA

Since the agency's creation almost 50 years ago, NASA has been a world leader in space-based studies of our home planet. Our mission has always been to explore, to discover, and to understand the world in which we live from the unique vantage point of space, and to share our newly gained perspectives with the public. That spirit of sharing remains true today as NASA operates 18 of the most advanced Earth-observing satellites ever built, helping scientists make some of the most detailed observations ever made of our world.

In celebration of its 'great observatory in the sky,' NASA is pleased to share the newest in its series of stunning Earth images, affectionately named the 'Blue Marble.' This new Earth imagery enhances the Blue Marble legacy by providing a detailed look at an entire year in the life of our planet. In sharing these Blue Marble images, NASA hopes the public will join with the agency in its continuing exploration of our world from the unique perspective of space.

Images above: The Blue Marble - Next Generation - offers a year’s worth of monthly composites in remarkable detail. These monthly images reveal seasonal changes to the land surface: the green-up and dying-back of vegetation in temperate regions such as the Appalachians and the Italian Alps; and advancing and retreating snow cover in Asia. Click on the images to view animations. Credit: NASA

History of the "Blue Marble"

The Earth didn't appear blue in NASA's first satellite images; rather, the Television Infrared Observation Satellite, known as TIROS, beamed home images in black and white. Still, those earliest images showed that a yet-unproven method of observing the Earth from space would help improve weather forecasts.

Astronaut photographs taken during the Apollo missions provided full-color images of Earth, and fostered a greater awareness of the need to understand our home planet. In 1972, from a distance of about 45,000 km (28,000 mi), the crew of Apollo 17 took one of the most famous photographs ever made of the Earth. This original 'Blue Marble' inspired later images of the Earth compiled from satellite data. In 2000, NASA data visualizers compiled an image of the western hemisphere using data from the National Oceanic and Atmospheric Administration including GOES-8 imagery, the NOAA's Advanced Very High Resolution Radiometer, and NASA/Orbital Science's Sea-viewing Wide Field-of-view Sensor.

In 2002, NASA produced the Blue Marble, the most detailed true-color image of the Earth's surface ever produced. Using data from NASA’s Terra satellite, scientists and data visualizers stitched together four months of observations of the land surface, coastal oceans, sea ice, and clouds into a seamless, photo-like mosaic of every square kilometer (.386 square mile) of our planet. In October 2005, the creators of the Blue Marble released a new version of the spectacular image collection that provides a full year's worth of monthly observations with twice the level of detail as the original. The new collection is called the Blue Marble: Next Generation.

Like the original, the Blue Marble: Next Generation is a mosaic of satellite data taken mostly from a NASA sensor called the Moderate Resolution Imaging Spectroradiometer (MODIS) that flies board NASA’s Terra and Aqua satellites. Also like its predecessor, the new Blue Marble is available free of charge to educators, scientists, museums, businesses, and the public. The collection includes images that are sized for different media, including Web and print. Users can download images of the entire globe, or just selected regions of interest.

Blue Marble: Next Generation offers greater spatial detail of the surface and spans a longer data collection period than the original. The original Blue Marble was a composite of four months of MODIS observations with a spatial resolution (level of detail) of 1 square kilometer per pixel. Blue Marble: Next Generation offers a year's worth of monthly composites at a spatial resolution of 500 meters. These monthly images reveal seasonal changes to the land surface: the green-up and dying-back of vegetation in temperate regions such as North America and Europe; dry and wet seasons in the tropics, and advancing and retreating Northern Hemisphere snow cover. From a computer processing standpoint, the major improvement is the development of a new technique for allowing the computer to automatically recognize and remove cloud-contaminated or otherwise bad data that were previously done manually. 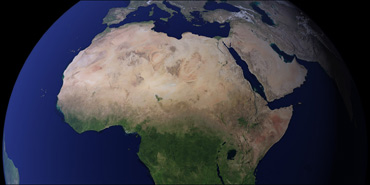 Image above: The Blue Marble - Next Generation shows incredible detail of the Earth. Click on the image to view a larger version of this image. Credit: NASA

Blue Marble: Next Generation improves the techniques for turning satellite data into digital images. Among the key improvements is greater detail in areas that usually appear very dark to the satellite (because a large amount of sunlight is being absorbed), for example in dense tropical forests. The ability to create a digital image that provides great detail in darker regions without 'washing out' brighter regions, like glaciers, snow-covered areas, and deserts is one of the great challenges of visualizing satellite data. The new version also improves image clarity, and gives highly reflective bodies of water, such as salt lakes, a more realistic appearance.

Those who intend to use the Blue Marble: Next Generation in their own publications or projects should be aware of areas that still require improvement. Areas of open water still show some 'noise.' In tropical lowlands, cloud cover during the rainy season can be so extensive that obtaining a cloud-free view of every pixel of the area for a given month may not be possible. Deep oceans are not included in the source data; the creator of the Blue Marble uses a uniform blue color for deep ocean regions, and this value has not been completely blended with observations of shallow water in coastal areas. The lack of blending may, in some cases, make the transition between shallow coastal water and deep ocean appear unnatural. Finally, the data do not completely distinguish between snow and cloud cover in areas with short-term snow cover (less than three or four months). This problem may be resolved in the future through the use of a more sophisticated snow mask.

Zoomed-In Highlights of the Blue Marble: