They Designed It. They Built It. Now, Watch It Fly!
Three, two, one -- liftoff!

While some student-built rockets soared to new heights on their first launch attempt, others needed a little prodding to make their journey skyward. But when the last of the circuits were tweaked, power supplies examined and parachutes double-checked, there were cheers all around. 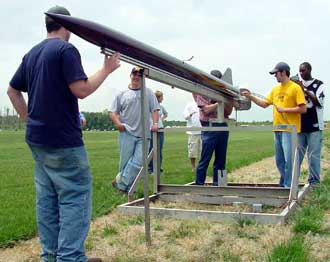 It was a day of high hopes -- Saturday, May 1 -- for more than 50 students and their teachers from four states, as they gathered in Manchester, Tenn., determined to prove they have the right stuff to design and build a reusable rocket. With hardware and umbrellas in tow, high school and college teams from Alabama, Indiana, Maryland and New York weathered a cloudy forecast to participate in "Southern Thunder 2004" -- one of the largest regional rocket events in the United States.

Forget the crowds of rocketeers watching curiously, nothing could dampen these students' spirits. As the sun came out, the young competitors were on a mission to prove the rockets they designed and built during the school year were capable of being launched, recovered with their scientific payload, or cargo, intact -- and reused.

It was a lofty mission for these future rocket men and women -- one offering a wealth of real-life lessons along the way, from teamwork to budgeting money and time. The Student Launch Initiative motivates students to pursue careers in science, math and engineering -- while giving them practical, hands-on aerospace experience. 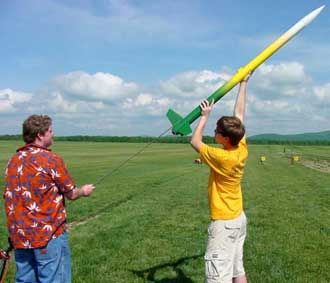 Image right: Student team members from Athens Bible School in Athens, Ala., get ready to launch their rocket from a site near Manchester, Tenn. View more Student Launch Initiative photos

These same students designing and building rockets today could play a key role in supporting the Vision for Space Exploration, an initiative that calls for a return to the moon as the launching point for missions beyond. Learning how to deal with real-world engineering problems gives students an experience that could pay off in fulfilling America's goals to launch humans to Mars and beyond.

In the meantime -- with students' feet firmly planted on the ground and the competition's goals set for rockets to reach an altitude of one-mile high for high school teams and two miles for college teams -- this high-flying challenge was on. One by one, the 10 student teams set their rockets on the launch pad, lit a match and "let 'er rip." While some rockets took to the skies with ease on their first attempt, others needed a second, and sometimes third, chance to make their journey toward the clouds.

All the while, amid applause and cheers, engineers and volunteers from NASA's Marshall Space Flight Center in Huntsville, Ala., jotted down the scores. They evaluated the teams' rocket designs, including propulsion material and safety features, and their ability to reach the targeted altitude. Judges also considered teams' formal reviews and Web site designs.