Space Spuds to the Rescue
What could NASA, potatoes and China possibly have in common? The answer might be as close as your next order of fries. Using NASA technology and a Chinese technique for growing seed potatoes, Quantum Tubers™ are a Space Age answer to growing more and better potatoes worldwide.

Since many countries depend heavily on potatoes for their basic dietary needs, they must have an adequate, dependable supply. That's where the space spuds can help, since their high-tech growth methods overcome many of the normal limitations of seed potato production. By combining an agricultural technique from China with controlled environment technologies originally developed by the University of Wisconsin-Madison for plant growth in space, American Ag-Tec International, Ltd., of Delavan, Wisc., produced the Quantum Tubers™.

To understand how the process works, it's important to know how the potatoes destined for your order of fries first begin. Tiny, marble-sized seed potatoes (minitubers) are typically grown from plantlets inside traditional greenhouses. In these greenhouses, there is little control over environmental conditions such as light and temperature. That means only one small crop of seed potatoes can be produced each year. 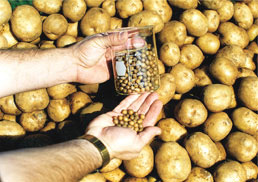 In an attempt to improve these conditions, researchers in China tried moving the small plants to different locations in the greenhouse in an attempt to create the best growing conditions possible.

At left: Marble-sized Quantum Tubers™ were used to grow the potatoes in the background. Credit: NASA.

That's where high-tech met Asian agricultural techniques. NASA's growth chambers -- used aboard the International Space Station for conducting cutting-edge research -- provided an improved solution to the potato problem. The computer-controlled chambers use unique lighting technology, high-efficiency temperature and humidity controls, and automation technology. That makes generating the minitubers in one closed facility possible, without the labor-intensive handling employed by the Chinese method. The self-sustaining chambers also brought production indoors, removing the growers' dependence on weather. Thus, the seed potatoes can be grown year-round in extreme environmental settings, such as deserts or excessively cold regions.

Growers using this advanced method can produce a new, virus-free crop of minitubers every 40 to 50 days instead of the previous yearly crop. One facility can now produce as many as 10 to 20 million minitubers per year -- a huge benefit to countries that, in the past, have been forced to depend almost entirely upon imported seed potatoes to meet their needs.

But the improvements don't stop with just the numbers. Chamber-grown seed potatoes are never exposed to diseases and pests that can reduce seed stocks, and their faster growth allows for more rapid introduction of new varieties in the marketplace. 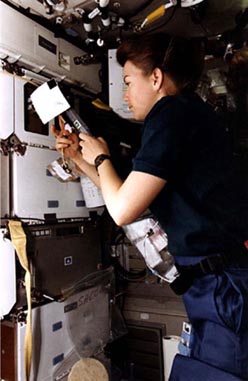 Seed potato production in space was tested in October 1995 aboard the Space Shuttle Columbia in its Microgravity Astroculture Laboratory. Plants will play an important role in long-duration space flights, such as missions on the International Space Station. Not only will they provide food and water to crews, but they will help replenish oxygen and help remove excess carbon dioxide from the air.

At right: Astronaut Catherine G. Coleman, mission specialist, checks out an Astroculture sample on the mid-deck of the Earth-orbiting Space Shuttle Columbia during STS-73 in October 1995. Five small potatoes were grown on-orbit from tubers in the Astroculture plant growth facility. Credit: NASA.

American Ag-Tec International's development of Quantum Tubers™ resulted through a NASA-sponsored Commercial Space Center located at the University of Wisconsin-Madison. NASA's Commercial Space Centers help companies develop products derived from space-based research as part of the Space Product Development Office at Marshall Space Flight Center. Growing potatoes may not be rocket science, but this Space Age development is a good example of the far-reaching benefits on Earth as well as in space. Keep that in mind the next time you order fries with your burger.