NASA Partners with National Federation of the Blind to get Blind Students Involved in Science
During the week of August 15-21, NASA Goddard partnered with the National Federation of the Blind (NFB) to host the "Rocket On" science camp. The camp was composed of twelve smart, motivated, and enthusiastic blind high school students from around the country who had an interest and aptitude in science. 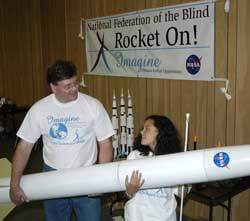 The week was full of hands-on exercises that allowed each student to learn more about technology, science, engineering, and mathematics. NASA engineers and instructors with the NFB Jernigan Institute presented workshops on the history of rocketry, basic rocket physics, and basic electronics.

"Blind people have been excluded from science," said Mark Riccobono, Manager of Education Program for the NFB Jernigan Institute. "Many people have misconceptions that the blind cannot dissect or observe the stars. Because of these misconceptions blind people start tracking out of the science field. That is why this partnership is so important; it shows that blind people are capable of doing science."

The week began at the NFB Jernigan Institute where the twelve students were grouped into 3 teams: Trajectory Analysis or the "Ego Squad"; Launch Pad Operations or "Team Action Reaction"; and Sensor Facilitation or "Circuiteers." Each team served an important mission for launch preparation.

"Team Ego Squad" used a graphing calculator to position the rocket to optimize flight. The calculations allowed the students to forecast the height, speed, and position of the landing. Alyshe Jeans, a 16-year-old from Wichita, Kansas, said, "This week has been an amazing opportunity. Through the use of the graphing calculator, our group was able to make sound predictions regarding flight."

"Team Action Reaction" was responsible for all physical aspects of positioning and launching the rocket. "I have learned a lot in this group. We learned electronics, physics, and mathematics," said 16-year-old Amy Herstein from Ellicott City, Maryland.

Image to left: Participants of the "Rocket On" science camp discuss their work with Phil Eberspeaker from Wallops. Credit: NASA

"Team Circuiteers" installed the four sensors into the payload. The four sensors consisted of thermistor, photo resistor, accelerometer and transducer. The thermistor is used to test the temperature change around the rocket. The photo resistor analyzed the motion of the payload depending upon the sunlight. The accelerometer assessed the acceleration of the rocket. Lastly, the transducer tested atmospheric pressure. Hoby Wedler, a 17-year-old from Petaluma, California, said, "In this group you learn about basic physics and Newton's Law. I am really excited that I was assigned to this team. I am fascinated with circuitry."

On Wednesday and Thursday, the students transported their payload and knowledge to NASA Wallops Flight Facility, Wallops Island, Virginia to prepare for launch. The students launched their ten and a half foot rocket on Thursday at 8:33 a.m. Through audible signals the students were able to determine the readiness of their experiments and the rocket. Their rocket reached an altitude between 4,900 and 6,000 feet.

"The kids were focused on their task and really got into it. Each student worked hard with the launch personnel. They were stationed at the blockhouses at 4:00 a.m. in order to prepare for their rocket launch. Overall they really did a fantastic job," said Keith Koehler, a Public Affairs Officer at Wallops.

The intent of the Wallops experience was to allow each student to safely participate in as many launch activities as possible. This included preparing the payload, loading the rocket on the launch rail, engaging in payload and rocket checks, and conducting the launch.

The week ended with a visit to the Goddard Space Flight Center in Greenbelt, MD, to reveal their findings at a mock press conference. Dr. Nancy Maynard, Director of the NASA Initiative of the Blind at Goddard, delivered the welcoming address. "This is the very first bold step to improve the opportunities for careers in technology, mathematics, engineering, and science. NASA needs more smart, motivated minds to carry out the mission," says Dr. Maynard.

Dr. Ed Weiler, Goddard's Center Director, made these comments during his opening remarks, "I am anxious to see the data these fine students discovered. We need young, intelligent people to work at NASA. I would love to see each of these students come back and do a co-op tour with us. NASA has an exciting future. This generation will be able to answer the question, 'Are we alone in the Universe?'"