Shuttle Enterprise at Center of Museum's Space Hangar
If you've ever wanted to get up close and personal with a real Space Shuttle, you've got your chance. 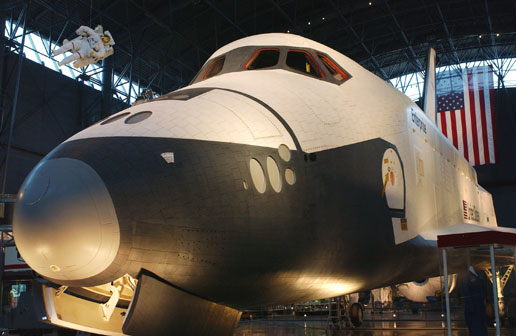 Image above: Enterprise is the centerpiece of the new space hangar. A Manned Maneuvering Unit, used for untethered spacewalks, hangs above the orbiter. Photo credit: NASA/Renee Bouchard. Click for high resolution photo.

Enterprise, the first Space Shuttle Orbiter, is the centerpiece of the new McDonnell Space Hangar at the National Air and Space Museum's Steven F. Udvar-Hazy Center in Chantilly, Virginia. The orbiter's been at the museum since it opened last December, but the space hangar has been closed off while workers refurbished the Enterprise.

Now, visitors will be able to get closer, exploring the Shuttle and a host of other space artifacts from the ground level or from two elevated overlooks.

"It's beautiful ... very impressive," said museum curator Paul Ceruzzi. "It deservedly will be the center of attention." Visitors can't climb into the shuttle, but Ceruzzi says he eventually hopes the museum will have a shuttle cockpit displayed separately. He also says the museum is considering putting cameras inside some of the exhibits to give visitors a virtual inside look. And he hopes they may someday replace Enterprise with a space-flown orbiter, once the Shuttle fleet is retired.

Enterprise never flew in space, but it was crucial to the Space Shuttle program. Its series of approach and landing tests in 1977 proved the orbiter could fly in the atmosphere and land like an airplane, except without power -- like a glider (+ View Photo). Astronaut Gordon Fullerton, who piloted the Enterprise to its first landing alongside Apollo 13 veteran Fred Haise, rekindled memories about the test flights during a dinner at the museum earlier this month (+ Read More). 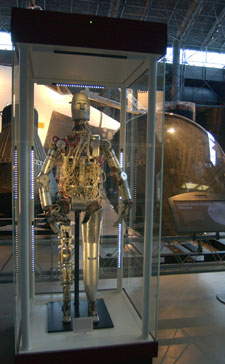 After those tests, Enterprise was flown to NASA's Marshall Space Flight Center in Huntsville, Alabama, where it was mated with the external tank and solid rocket boosters and subjected to a series of vertical ground vibration tests. The orbiter was also sent to the Kennedy Space Center in Florida, where it was rolled out to the launch pad to act as a "stand-in" as NASA prepared for the first shuttle launch.

Enterprise is most definitely a unique machine, right down to the origin of its name. It was originally to be named Constitution, but viewers of the popular TV show "Star Trek" started a write-in campaign urging the White House to select the name Enterprise. It worked, and the crew of the hit show got a first hand look at the orbiter in California (+ View Photo: Browse | High Resolution ).

Enterprise is far from the only attraction in the new hangar, which boasts a total of 113 large space artifacts, including two Mercury capsules, an Apollo Command Module, an array of cruise missiles, satellites and space telescopes, and a Space Shuttle Main Engine (+ View Photo: Browse | High Resolution ). Visitors will also find a form-fitting centrifuge seat made especially for Mercury astronaut John Glenn, a full-scale engineering prototype of the Mars Pathfinder Lander and a model of the Sojourner Rover.

Curator Ceruzzi particularly likes the Apollo-era artifacts, including an instrument unit from a Saturn V rocket originally intended for the Apollo 19 mission that never flew. "It shows you the complexity of guiding the Saturn V rockets to the moon," he said. "They all launched safely. Every one of them."

Ceruzzi also highlighted two artifiacts tied to the historic Apollo 11 moon mission. The Mobile Quarantine Facility, a silver trailer, was home to the Apollo 11 crew for 65 hours after they landed, as doctors assessed whether or not they had brought any "moon germs" to Earth (They hadn't). Nearby is a boilerplate Apollo 11 command module, with the flotation bags and flotation collar that righted the Apollo 11 command module Columbia and kept it afloat when it splashed down in July 1969. 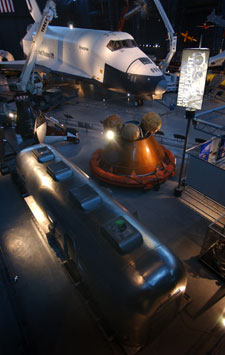 Also on display: The history-making Gemini VII capsule, which was home to astronauts Frank Borman and Jim Lovell for nearly 14 days in 1965. The mission demonstrated that humans could live in space for that long, which would be necessary for lunar missions. It also made history when Lovell and Borman rendezvoused with astronauts Wally Schirra and Tom Stafford in Gemini VI-A.

Image right: NASA's legacy of exploration in an eyefull, with Apollo relics in the foreground as Enterprise sits behind. The silver trailer is the Mobile Quarantine Facility where Apollo 11 astronauts were kept after their landing. Nearby is a boilerplate Apollo command module, with the actual Apollo 11 flotation bags and collar. Photo credit: NASA/Renee Bouchard. Click for high resolution photo.

The two craft flew together for over five hours at distances from 1 to 295 feet, another key milestone essential to the eventual moon landings (+ View Photo From Gemini VII Mission: Browse | High Resolution ).

In addition to the big items, there are more than 500 smaller artifacts, including spacesuits, research crystals, space-themed toys from the 1950s and 1960s and a tiny spider named "Anita," carried on Skylab for web formation experiments.

Ceruzzi said the message young visitors should take away from the hangar is simple: "Just how fun it is to fly in space." But, he added, "it's not just the astronauts but the people involved in all the support activities" that make space exploration possible. Ceruzzi said there are "lots of opportunities" for young people to be inspired, including a whole section on space science missions.

Many of the objects now on display in the space hangar had been in storage for decades. Some of the items have been previewed over the past few months in the Center's aviation hangar.

The museum's unparalleled space collection is built on an agreement that gives the Smithsonian first option to acquire any equipment used and then retired by NASA. The collection includes every retired American spacecraft that flew humans and returned safely to Earth; every spacesuit used to walk on the moon and backups or engineering models of nearly every major American satellite or probe. 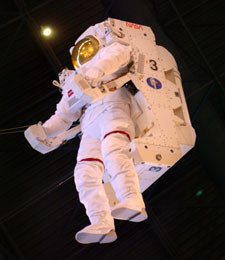 The Steven F. Udvar-Hazy Center is located in Chantilly off Route 28 near Washington Dulles International Airport. Both facilities are open daily from 10 a.m. until 5:30 p.m. (Closed December 25) and admission is free.