Videographer Lori Losey has captured some spectacular video footage during her 17 years documenting flight research for NASA at the Dryden Flight Research Center in the high desert of Southern California and around the world.

Image left: The space shuttle Discovery atop NASA's modified 747 is captured over the Mojave Desert while being ferried from Dryden to the Kennedy Space Center. (NASA Dryden photo by Lori Losey)

It was a surprise, however, when a still photograph -- rather than a video -- she had taken of the space shuttle Discovery and its modified Boeing 747 Shuttle Carrier Aircraft won a third place award in the space category from Aviation Week and Space Technology, one of 13 awards in the magazine's 2005 photo contest. The winning photos were published in the aerospace magazine's Dec. 19-26 issue.

Losey's award-winning photo was taken from the rear cockpit of a NASA F/A-18 mission support aircraft flown by NASA research pilot Dick Ewers shortly after the shuttle-747 combo lifted off from Edwards Air Force Base last Aug. 19. The image shows the piggyback pair climbing out over the desert landscape, its terrain accentuated by shadows from passing clouds. Ewers and Losey spent over 30 minutes capturing as much high-definition video footage and still imagery as they could before turning back toward home.

"It was truly an amazing sight to see these two aircraft together in flight," Losey reflected. "Simply put, this was the best seat in the house!" 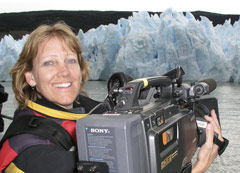 Losey, currently senior video producer/director at Dryden, had entered five images of the craft at the prodding of her supervisor, Dryden imagery chief Jim Ross. Both are employed by Las Vegas-based Arcata Associates, which provides a variety of services under contract at NASA Dryden.

"I heard great things about the video coverage she had provided, so I looked at the stills she had come back with," Ross commented. "There were some very good images in that grouping as well, so I suggested that she enter them in this year's contest. Lori was a bit reluctant, since her specialty is video, but with some convincing she agreed."

Losey has logged nearly 400 hours of flight time as an aerial photographer in various aircraft. She has been the television director for 14 space shuttle landings at Edwards Air Force Base in California since 1992. In 2004, Losey was honored with NASA's Videographer of the Year award for her work in public affairs and documentation. A graduate of Pepperdine University, Losey has also received the NASA Public Service Medal for "...contributions made toward and promotion of Dryden Flight Research Center projects through the production of video documentation."