Follow the Water:
Finding a Perfect Match for Life

From ancient times, explorers have "followed the water." Water's unique chemical and physical properties are essential to human survival. Without water, basic physical processes would be impossible. Cells within the human body would die. None of the essential physical functions, such as breathing, digestion, or muscle movement could take place without water.

About 70 percent of the human body is made up of water and, coincidentally, more than 70 percent of Earth is covered in water. Water creates an environment that sustains and nurtures plants, animals and humans, making Earth a perfect match for life in general.

Image above: The Sea-viewing Wide Field-of-View Sensor (SeaWiFS), aboard the OrbView-2 satellite, has given researchers an unprecedented view of the biological engine that drives life on Earth. Credit: NASA

Before the development of automobiles and airplanes, water was a passageway for transportation. Early settlements, like the first permanent English colony in North America in Jamestown, Va., were established near oceans, bays and large rivers that provided a "highway" for trade and travel. Ports were key points of entry for ships bringing people, goods and news from home.

On Earth, liquid water interacts with soil in predictable ways. Scientists think the same is true elsewhere in the solar system. Tests that determine the degree of acid in the soil, its pH value, on a planet like Mars should indicate what gases have formed and then modified the Martian atmosphere. Examination of lunar soil in the moon's polar regions during future missions could reveal much about the nature and extent of frozen water there.

For pioneers, finding a dependable source of drinkable water usually meant the difference between life and death. The English settlers chose Jamestown Island for their colony because they could easily navigate their small ships close to shore, and the nearby swamps would enable them to more easily defend their settlement.

The river the colonists would name the James appeared to taste "sweet" at the site of the fort, so no thought was given to digging wells. Unfortunately, the settlers' inexperience in this new environment led to disaster. 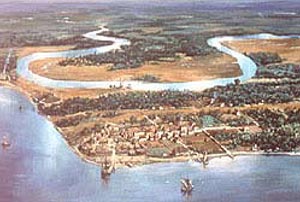 The site the settlers picked for Jamestown is about 40 miles (64.4 kilometers) from the Chesapeake Bay and only 57 miles (91.7 kilometers) from the Atlantic Ocean. The lower part of the James River is actually an estuary, a place where salt water transitions into fresh water. The water in the estuary was brackish, a mixture of fresh and salt water that often became stagnant.

The seasons also played an important role in the quality of James River water. In early spring, melting mountain snows provided enough fresh water run-off to push the brackish water back toward the ocean. Later, as the temperatures warmed, the salt water once again moved up the river. In fact, the brackish water around Jamestown contained up to five times more salt than is safe to drink.

To compound problems, the settlers were victims of the onset of a drought that began in 1606. Even the shallow wells that were dug during the second year of the settlement became contaminated by salt water seeping into them as the fresh water supplies dwindled.

By May 1610, one colonist reported that only 60 of the nearly 500 settlers at Jamestown were still alive. Some historians believe the startling number of deaths from disease in the early years may have been caused by the settlement's placement along the James River.

If extended human settlement of the moon is to take place, ways to find or produce water will be essential. Reservoirs of water ice may already exist there. According to initial scientific data returned by NASA's Lunar Prospector, water ice exists at both the north and south poles of the moon. 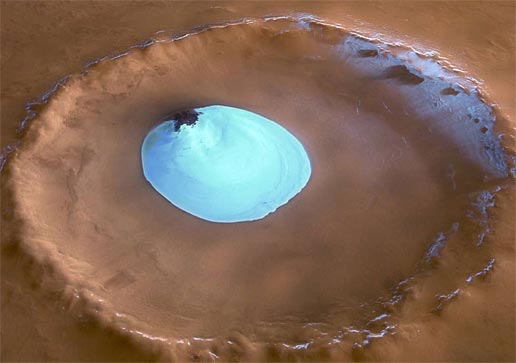 In 1996, NASA's Clementine spacecraft collected data that indicated there was ice in the bottom of a crater near the moon's south pole. This area is permanently in shadow and very cold. In 1998, the Lunar Prospector probe gathered additional scientific data that showed even more ice at the moon's north pole.

Based upon that information, scientists estimate that more than six billion tons (5.44 trillion kilograms) of water ice may be trapped near the moon's polar regions.

Clues to Mars' ancient geology may be locked in its waters. Spirit and Opportunity, two robot rovers that landed on the surface of Mars in 2004, have investigated rocks and taken pictures of features on Mars that seem to prove the planet was very wet during its youth.

New Mars missions are being planned to look for samples of water and finally reveal the truth of the planet's distant past. Tests that determine the degree of acid in the Martian soil, its pH value, should indicate what gases have formed and then modified its atmosphere.

In 2002, the Mars 2001 Odyssey orbiter found evidence of large amounts of water ice buried in a thin layer of soil around the Martian poles. Scientists estimate that high concentrations of ice, perhaps as much as 80 percent by volume, may be within two feet (0.6 meters) of the surface. The permafrost on Mars is another place that probably contains large amounts of frozen water.

Closer to home, on Earth, liquid water continues to be a subject of keen interest. Understanding cycles of rain and drought may better help scientists understand how water influences and is in turn influenced by Earth's climate. A series of Earth-observing satellites, including Aqua, CALIPSO, CloudSat and ICESat, are investigating Earth’s water cycle, drought, clouds and humidity. These observations will provide insight into changes in Earth's weather, climate and air quality. 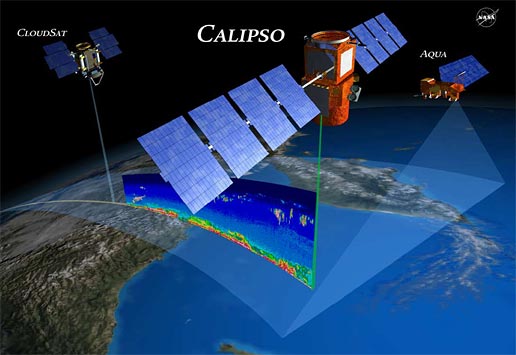 Image above: Data from Earth-observing satellites -- including Aqua, CALIPSO, CloudSat and ICESat -- will provide insight into changes in Earth's weather and air quality. Credit: NASA