Early explorers found their way by observing landmarks, such as large rocks or trees, along rivers and coastlines. When out of sight of land, they gathered clues about their location by measuring water depth, monitoring wind pattern and wave shape, and observing the position of the sun as it moved across the sky. At night, they steered by the stars.

By the 17th century, navigational tools had been developed, that while not always accurate, at least gave their users a general idea about location. Captain John Smith listed the astrolabe and magnetic compass as necessary navigational instruments for a ship of his day.

Mariners, or sailors, used an astrolabe to find the angle of the sun or specific stars in the sky. Applying basic trigonometry skills to the angle, a sea captain could calculate the ship’s latitude. The astrolabe was not always reliable and could only be used when a clear view of the horizon and an anchor point, such as the sun or another star, were visible. 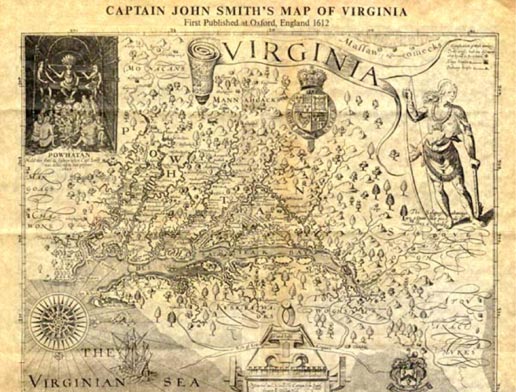 Image above: Considering the crude navigational tools he had at his disposal, Captain John Smith’s map of Virginia was amazingly accurate. Credit: Virtual Jamestown Archive

In later years, celestial navigators replaced the astrolabe with a tool called a sextant. The sextant was a unique precision instrument for measuring angles. To measure the altitude of a celestial body, the navigator pointed the sextant at the horizon and slid a movable sighting arm up until mirrors in the sextant reflected an image of the body onto the horizon. The horizon provided a baseline against which to measure the angle to the sun, star or moon. By applying math skills and using charts, the navigator could calculate the latitude and identify his position on a map.

The magnetic compass used by the 17th century explorers was one of the most reliable navigation instruments available at the time. A compass, which always points north, provided navigators with a fixed reference point. Using a compass and a map or chart, a skilled, careful navigator could direct a craft from one destination to another, even in fog or at night.

Cabin boys were taught to "box the compass." The boys had to memorize the 32 points of the compass, as well as learn to tell time with a sandglass or sundial. They could check the speed the ship was traveling using dead reckoning or a log line.

Dead reckoning was a technique to estimate position by calculating the distance, direction and amount of time that a craft traveled. Explorers could also use dead reckoning to calculate the distance they traveled on land. By knowing how many paces a man usually walked in a given distance and keeping track of the number of paces walked, a person could estimate the distance he had traveled and record the distance on a map or in a journal.

A log line was a rope attached to a log on one end and a reel on the ship on the other end. The rope was divided into equal lengths called knots. The knots were marked with colored cloth that was tied to the rope. When a captain wanted to know how fast his ship was traveling, one of the sailors threw the log end of the rope into the water and counted the number of knots that unwound from the reel in 30 seconds, as timed by a sandglass.

Each knot, which is spaced approximately 50 feet (about 15 meters) from the next knot, represents one nautical mile per hour (mph), or about 1.1 mph (1.8 kilometers per hour, or kph). An average sailing ship could travel at a speed of about 6 knots per hour (6.9 mph, or 11.1 kph).

The English settlers who arrived in Jamestown in 1607 drew careful maps and made notes about their locations, the plant and animal life they encountered and their interactions with the native peoples. Captain John Smith's map of Virginia was amazingly accurate considering the crude navigational tools he had at his disposal.

Ships in the 17th century, like ships of ancient times, were designed to sail with the wind behind them. These ships, known as "downwind sailors," could make little progress against winds from the wrong direction. Ships often had to wait at port or at sea for the right wind direction to continue their journeys. The rigs for these ships consisted of large square sails and the 75 lines to control them. 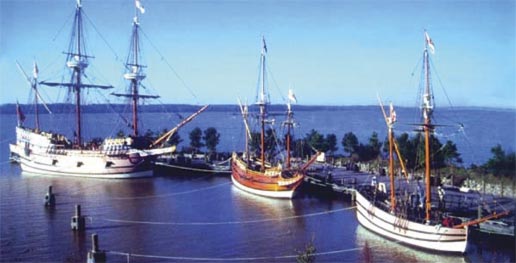 Image above: Reconstructions of the Susan Constant, Discovery and Godspeed. Credit: Yorktown-Jamestown Foundation

The Discovery was the smallest of the three ships. She was 38 feet (11.6 meters) long at the waterline and could carry 21 people. This ship was about the size of a modern-day school bus.

The Godspeed was a larger ship, boasting a deck that measured 64 feet (19.5 meters). This ship carried 52 people and was a little larger than a modern-day semitruck.

Each ship carried smaller longboats or shallops that could be rowed and were used to explore the lakes and rivers near the Jamestown settlement. These boats did not have much room for cargo, but were very useful for putting ashore anywhere along the riverbank. Captain John Smith used a shallop to explore and map the area in and around the Chesapeake Bay. The Virginia Indians used a different kind of vessel to travel up and down the Virginia waterways. Their log canoes were square on both ends and had flat bottoms. The design was difficult to steer, but was quite stable, allowing for easier stepping on and off the boat. The canoes were powered by paddles and poles.

Modern sailing ships of the 21st century use technology that allows them to harness the wind in any direction. The sails and design of the ship work together, much like airplane wings, creating lift as the air moves across the sails.

As explorers ventured into space, new challenges in vessel design had to be overcome. NASA scientists and engineers had to design and build craft that would withstand the extreme conditions experienced in the vacuum of space. The first capsules to be shot into space were very small and designed only to hold a single crewmember.

The total length of each of the Mercury capsules was only about 11 feet (3.4 meters) and the pressured volume was a small 55 cubic feet (1.6 cubic meters). In spite of being crammed into a vehicle not much larger than a refrigerator, Alan Shephard made history when he completed America's first suborbital flight. John Glenn later became the first American astronaut to orbit the Earth, spending 4 hours 55 minutes and 23 seconds in space.

The space program continued with the design of Gemini capsules that were a bit larger, having a pressurized volume of nearly 80 cubic feet (2.3 cubic meters). These capsules were about the size of a phone booth or the front half of a Volkswagon Beetle, yet carried two crewmembers. Astronaut Pete Conrad once remarked that his time on Gemini 5 was like "spending five days in a garbage can." Gemini gave U.S. astronauts their first real experience at living and working in space.

As NASA made plans to land on the moon, a new capsule was designed. The Apollo capsules were much larger, almost 210 cubic feet (6 cubic meters), and were designed to hold a crew of three. The spacecraft was made up of two parts, or modules. The Command Service Module contained the life support systems for the five-day round trip to the moon, while the Lunar Module was designed to land on the surface of the moon and then dock again with the Command Module before returning to Earth. The crew cabin on the Command Service Module was only about 6 feet (1.8 meters) by 6 feet (1.8 meters) by 3 feet (0.9 meters). 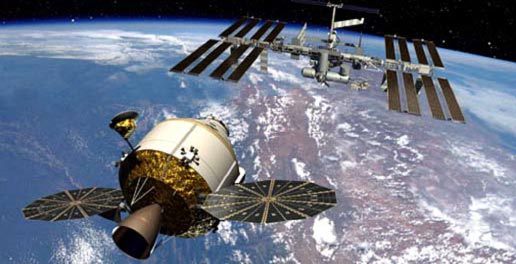 NASA is currently working on the next generation of space vehicles. The Orion spacecraft will have a shape similar to the gumdrop shape of the Apollo capsules, but Orion will be much larger, about 671 cubic feet (19 cubic meters) or about the size of an average bedroom. This cone-shaped spacecraft will provide a safe, economical means of transporting four-member crews to and from space.

Orion will replace the space shuttle, a winged vehicle that was able to operate on land, in the atmosphere and in space. The shuttle combined the features of a rocket, aircraft and glider and has been used to carry satellites and other cargo into Earth orbit. From its first flight on April 12, 1981 to today, no other spacecraft has been used for so many flights.

Once the International Space Station is completed, NASA will retire the space shuttle fleet. Cumulatively, the five space shuttles: Atlantis, Challenger, Columbia, Discovery and Endeavor, have spent over 1,000 days in space.

For information about Jamestown 2007 events, visit: