A small piece of early American history has returned to Jamestown, Va., after a trip to the International Space Station. The nearly 400-year-old lead cargo tag was on board NASA's space shuttle Atlantis during June's STS-117 mission.

Astronaut Pat Forrester, one of the space walkers on the 14-day mission, brought the one-inch in diameter tag and some commemorative coins back to Virginia. His visit also marked a homecoming of sorts for the 50-year-old astronaut. He graduated from West Springfield High School, Springfield, Va., in 1975 and received a master of science degree in mechanical and aerospace engineering from the University of Virginia in 1989. 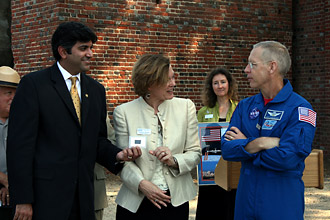 "Because our mission was extended by three days the tag and coins logged 5.8 million miles in space," said Forrester in ceremonies at Historic Jamestowne. "As a former Virginian, I'm excited to return these priceless mementos to the Commonwealth to help commemorate this year's 400th anniversary of Jamestown, the first permanent English settlement in North America."

NASA returned the "Yames Towne" shipping tag to Historic Jamestowne where it will join hundreds of other artifacts in a new archaeological museum called the Archaearium. Since 1994 archaeologists at the Jamestown Rediscovery project have dug up more than a million items, including the long-lost remains of James Fort. For centuries, the fort was believed to have eroded into the James River.

"We found the tag at the bottom of a well during a dig at the James Fort," said William M. Kelso, Association for the Preservation of Virginia Antiquities (APVA) director of archaeology at Historic Jamestowne. "It appears to be a discarded shipping tag from a crate or trunk that arrived from England around 1611. The artifact clearly marks Jamestown as a destination – our nation's first address." 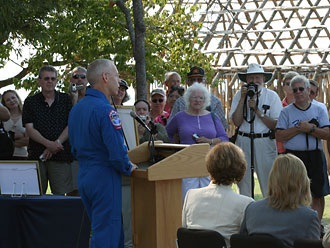 A $5 gold piece and a silver dollar, both of which depict Jamestown symbols, make up each commemorative coin set that also flew on Atlantis. One set of the coins, authorized by Congress and issued by the U.S. Mint, will be displayed at the National Park Service's Historic Jamestowne Visitor Center.

The other set can be seen at Jamestown Settlement, a 17th century living history museum.

NASA teamed with Jamestown 2007 to promote the spirit of exploration then, now and in the future. The artifacts' out-of-this-world trip was just one of a number of events held during the last 18 months that honored the nation's pioneering spirit.