On May 13, 2007, Jamestown marks its 400th anniversary as the site of the first permanent English settlement in North America. The area has remained continuously populated since that time, but native peoples were the earliest to arrive. Based on recent discoveries at Jamestown, anthropologists believe native peoples began to use Jamestown Island's natural resources over 10,000 years ago.

That was a fact unknown to the English voyagers who landed on the shoreline of what would become known as Jamestown. Once the Susan Constant, the Godspeed and the Discovery docked, 104 weary colonists trudged from their cramped quarters onto swampy marshland. 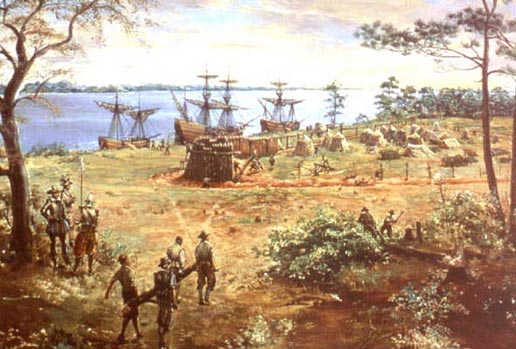 For almost five months, these men had traveled from England, sent by the Virginia Company of London. The Jamestown site was a peninsula, connected to the mainland by a narrow isthmus and protected on three sides by the James River, Back River and Sandy Bay.

Directed by the Virginia Company to find "the true, most wholesome and fertile place" to settle, the Jamestown site was defensible with a deep harbor close to shore. About 40 miles (64.4 kilometers) upriver from the Chesapeake Bay, the area was also easily accessible for overseas trade. The forests were filled mostly by hardwood trees. Walnut, beech, oak and hickory trees covered the low-lying land.

In 1607, Jamestown's tidal wetlands looked much like the tidal wetlands of today. The sea level, however, was about 3 feet (0.91 meter) lower than now, exposing more land. Jamestown Island was originally a peninsula during the time of the early settlers, but the waters around it were, and remain, restless, eating away the land.

Some contemporary studies indicate that the shoreline was eroding rapidly even during the time of the English colonization, at rates as high as five to six feet (1.52 to 1.83 meters) each year. Wave action would eventually turn the peninsula into an island.

On first impression, however, the area appeared to be exactly what the settlers needed to build their new fort.

A "Waste" and Difficult Ground

Wahunsenacawh, or better known to history as Powhatan, was the paramount chief of a powerful chiefdom of Virginia Indians who lived throughout the coastal plain of present-day Virginia, where the Englishmen had chosen to build their new settlement. Both Powhatan and his daughter Pocahontas became important to the Jamestown settlers. One of Powhatan's sons described the area around Jamestown as "waste ground" because the Powhatan Indians knew it was difficult to find fresh water there. Their villages were built in areas with easy access to fresh water. 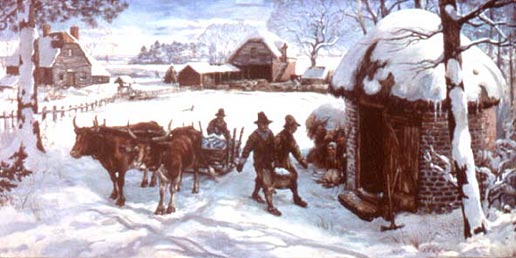 By mid-May 1607, the early Jamestown settlers realized that weather in their new land was very different than weather in England, their homeland. Summer in England had little humidity and few bugs. Summer in Jamestown, with tropical humidity and oppressively high temperatures, bred mosquitoes and biting flies. And winters, as the settlers soon discovered, were as cold as the summers were hot.

Evidence from archeological digs shows that 1607 fell within a cool period in North America and western Europe that historians call the "Little Ice Age." The heat of summer did not last; the colonists were greeted by a severe winter in 1607-1608. The harsh conditions were compounded by the fact that they also had to endure one of the worst droughts in nearly 800 years.

Dendrochronology is the scientific study of tree rings. Evidence found in the rings of ancient, living bald cypress trees near present-day Jamestown Island, supports the theory that a drought occurred there from 1606-1612. This drought contributed to poor water quality and difficult growing seasons.

Although the Jamestown settlers had been instructed to try farming on a small scale, the sandy soil did not hold moisture well and the drought killed what crops they did manage to plant. Food supplies ran very low and many of the settlers starved to death during the winter of 1609-10, called, "The Starving Time." The colony's survivors were saved only by the arrival of ships from England with fresh supplies.

NASA plans to return to the moon and eventually build a base there. This base would be the first settlement in the beginning of an interplanetary migration that will eventually take explorers and settlers throughout the Solar System. Not unlike the conditions confronted by the Jamestown settlers, the initial challenges faced by would-be, off-world colonists will be many. 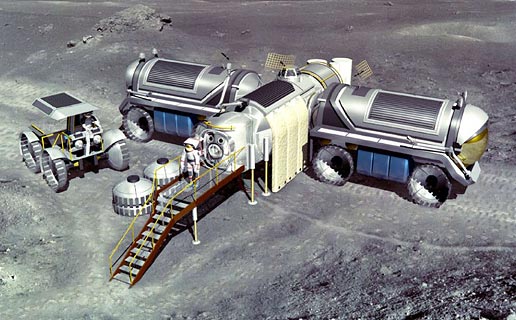 Image above: Artist's concept of a future moon base. Credit: NASA.

The moon has basically no atmosphere. With no atmosphere, there can be no weather (as weather is defined on Earth) and no ozone to protect humans from the sun's ultraviolet rays. Although Jamestown's weather was harsh, Earth's atmosphere protected the English settlers from ultraviolet rays and its magnetosphere guarded against solar particles and other forms of what is known as "space weather." The same will not hold true on the lunar surface.

Future settlers on the moon will have to take additional precautions. Energetic particles constantly bombard the moon; they can harm anyone who is not adequately shielded. Exposure dangers include significant long-term risks for cancer.

More than 80 percent of the moon is ancient, heavily cratered highland. The rest of the surface is younger basalt-covered, plains-like areas called maria. There are many impact craters, some with bright rays, crater chains and the long, narrow valleys known as rilles.

A mixture of fine dust and rocks called regolith covers the moon. Some scientists call this "lunar soil," but it contains none of the rich, organic material found in Earth's soils. Lunar regolith is made up mostly of fragments of lunar rocks found in the area. Mixed in with these local rocks are interplanetary and deep space rock fragments, tossed in by the bombardment of meteoroids pounding into the lunar surface.

Above a base of fractured bedrock, the regolith becomes thicker as impacts continue to rework it. With no weathering and erosion on the moon, the powdery surface does not wash away.

The lunar surface is charcoal gray and sandy, with a sizable supply of fine sediment. Meteorite impacts over billions of years have ground up the formerly fresh surfaces into powder. Because the moon has virtually no atmosphere, even the tiniest meteorite strikes a defenseless surface at full speed, at least 12 miles (19.3 kilometers) per second.

Some rocks lie thrown about the surface, resembling boulders sticking up through fresh snow on ski slopes. Even these boulders will not last long, maybe a few hundred million years, before they are ground up into powder by the steady rain of high-speed projectiles. Of course, an occasional larger meteoroid, about the size of a car, arrives and carves fresh rock from beneath the blanket of powdery soil. Falling meteoroids continue to grind the fresh boulders down, slowly but inevitably.

The layers of regolith vary, from about 6.5 feet (2 meters) in depth on the youngest maria to perhaps 65 feet (nearly 20 meters) on the oldest surfaces in the highlands. Lunar regolith has mixed local material so that a shovelful contains most of the rock types that occur in an area. The regolith contains rock and mineral fragments from the original bedrock. It also contains glassy particles formed by the impacts.

But regolith may prove useful when people establish permanent settlements on the moon. Life support systems require the life-giving elements hydrogen and oxygen (for water), carbon and nitrogen. Plenty of oxygen is contained within the silicate minerals of lunar rocks, with the solar wind providing the remaining elements.