Human needs have not changed for centuries. As the world's first explorers set off to discover new lands and map uncharted territories, they had to make sure that basic survival requirements were met. To endure these long voyages, human beings had to make sure they had food, water, air and adequate shelter on hand. If any one of these basic needs were not met, life would be put in jeopardy.

Having sufficient supplies while traveling has always been a problem for explorers. Pioneers either brought food and water on their journeys or gathered them along the way. Shelter was either carried or built on site to protect settlers from the weather or other dangers. 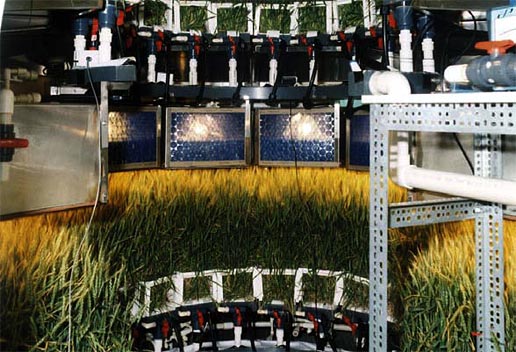 Beyond the boundaries of our Earth, 21st century explorers will face a unique set of challenges as they return to the moon, travel to Mars and scout the far reaches of the solar system. Much as did the earliest terrestrial pioneers, this newest generation of travelers will have to transport nourishment and materials with them on journeys that will be every bit as difficult as those undertaken by their ancestors.

In 1606 King James I granted a charter to the Virginia Company, a group of London entrepreneurs, to establish an English settlement in North America. Before beginning the long journey, the settlers estimated how much food and water they would need for the voyage and for sustenance once they arrived in the New World. There was no guarantee that food would be plentiful in this strange new land.

The voyage lasted nearly five months. With limited space on board the ships and few methods for preserving food, very few kinds could be stored and carried. No cooling or refrigeration was available, so all food was salted, dried or pickled in vinegar to help prevent spoiling. These foods, which could be used for weeks or even months, did not taste very good. 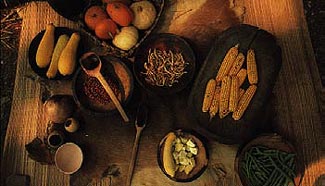 Basic daily rations for each traveler included dried hardtack (biscuits that were baked until all moisture was removed); salted, dried or pickled meats and fish; cheese; oatmeal or barley; and a gallon of beer or wine. In bad weather, no cooking was allowed on board the ships, so the settlers soaked the biscuits in water to make them edible. Cheese and cold pickled meats completed these meals.

Ships often stopped at the Canary Islands, or Caribbean islands, to trade for fresh provisions. Fruits, vegetables and sea tortoises could be added to the normally bland diet, but fresh supplies needed to be used quickly before they spoiled.

A wonderful sight greeted the Jamestown settlers when they finally reached Virginia. George Percy, one of the settlers, wrote about the beautiful trees and fresh waters. The area appeared to be filled with wildlife and edible plants. When Captain Newport returned to England for fresh supplies, the settlers were instructed to trade for food with the native inhabitants of the area, the Powhatan Indians. Unfortunately, relations with the Virginia Indians were often unpredictable.

Weather conditions and inexperience worked against the settlers, and soon they had little fresh food or water. With the beginning of a drought that lasted for several years, even the Powhatan crops failed. The settlers did not know how to hunt and fish for the strange species of animals they found in this new environment. Captain Newport's return trip with fresh supplies was delayed by several months. Reports tell of settlers trying to survive by rationing barley soaked in water divided among five men. 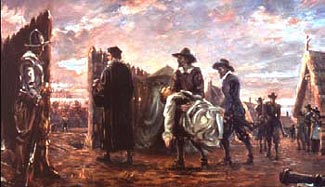 Water near the settlement was brackish, containing not only large amounts of salt, but also carrying bacteria causing typhoid fever and other diseases. Many historians believe that the lack of fresh water was the leading cause of many of the settlers' deaths.

George Percy wrote, "Our men were destroyed with cruel diseases, as swellings, burning fevers, and by wars, and some departed suddenly, but for the most part they died of mere famine."

Eventually, the settlers adapted to this new environment and learned how to find fresh water and hunt. By 1610, about half of the meat sources for the settlers came from local wildlife. The settlers established more friendly relations with the Virginia Indians who shared their knowledge about food, water and shelter.

The Powhatans taught the settlers to use Tuckahoe, an edible plant root, to make bread and prepare a nutritional meal of succotash. Succotash was a mixture of beans, corn, squash and meat. The settlers traded coins, beads and metal products with the Virginia Indians for deer, waterfowl, melons, beans, squash and berries.

Astronauts must also take their food with them when they travel. Some of the same methods used by early explorers are still being used to store food onboard the space shuttle and the International Space Station (ISS). Preparation varies with the food type. Some foods can be eaten in their natural form, such as fruit. Other foods require adding water for rehydration, such as macaroni and cheese or spaghetti.

When astronauts travel into space, NASA scientists determine how much food will be needed for each mission. For example, an astronaut on the ISS uses about 1.83 pounds (0.83 kilograms) of food per meal each day. About 0.27 pounds (0.12 kilograms) of this weight is packaging material. Longer-duration missions will require much more food. 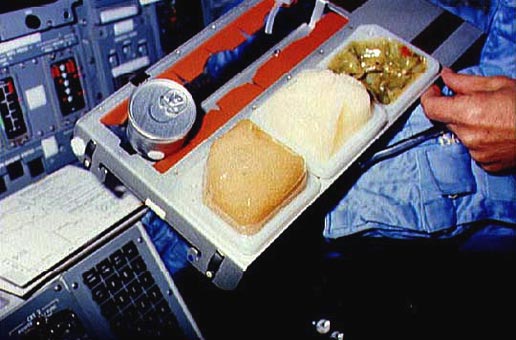 A trip to Mars and back, for instance, may take more than three years and require the provision of thousands of kilograms of food. A crew of four on a three-year martian mission eating only three meals each day would need to carry more than 24,000 pounds (10,886 kilograms) of food.

In the early days of the American space program, food for astronauts consisted of freeze-dried powders, bite-size cubes and semi-liquids in tubes. Most astronauts agreed that the foods were unappetizing and hard to eat. As scientists learned more about the space environment, better ways to prepare and package foods were developed.

Today, the types of foods available include rehydratable, temperature-stabilized, irradiated and natural-form foods. Most foods are ready to eat simply by adding water or by heating. All food is precooked and processed so it requires no refrigeration. The only exceptions are fresh fruits and vegetables.

Shuttle astronauts work with nutritionists to select menus that appeal to their individual tastes. Five months before flight, menus are selected and analyzed for nutritional content by the shuttle dietician. Foods are tested to see how they will react in a reduced gravity environment. Meal times and the amount of food consumed are closely monitored because the astronauts often report not feeling hungry in space. Caloric requirements are determined using a basal energy expenditure (BEE) formula.

The food list looks much like the foods Americans would eat at home. Astronauts may choose from foods such as cream of mushroom soup, macaroni and cheese, chicken, beef, ham, scrambled eggs and cereal. Shrimp cocktail is a favorite because of its spicy flavor. Foods such as nuts, granola bars and cookies are classified as natural-form foods. They are ready to eat and are packaged in clear, flexible pouches that are cut open with scissors. Beverages come in powdered form and include coffee, tea, apple cider, orange juice and lemonade.

On Earth, the average American uses about 35 gallons (132 liters) of water every day. Water is heavy, so attempts are made to minimize the amount of water carried on board spacecraft.

On the space shuttle, water is produced as a byproduct from fuel cells. The process is complicated but, simply put, fuel cells make electricity when hydrogen and oxygen are combined. When the atoms combine, they not only make electricity, but water as well. This water can be recycled and used by the astronauts.

Because electrical power for the ISS is generated from solar panels rather than from fuel cells, no water is produced. Small amounts of water are recycled from cabin air onboard the ISS, and the astronauts limit water use to only about three gallons (11 liters) per day.

For information about Jamestown 2007 events, visit: